Two Heads Are Better Than One

It all began in our local supermarket, when Highland Railway Society colleague, John Allison asked "Did I know about the carved head on the railway bridge at Conon Bridge?" My answer was short and to the point, "No", but my interest was aroused. Subsequent enquiries revealed that a local group of amateur archaeologists, members of The North of Scotland Archaeological Society1 had been conducting a survey of a medieval moated homestead called David's Fort situated in Balavil Wood some 2 miles south of Conon Bridge, Ross-shire (Nat. Grid ref. NH53945328). On returning to their cars parked on the old A9 trunk road (now reclassified as A826) close to the road bridge over the railway at Balavil (Grid Ref. NH54005400), they discovered a carved head inserted into the south-east parapet of the bridge. 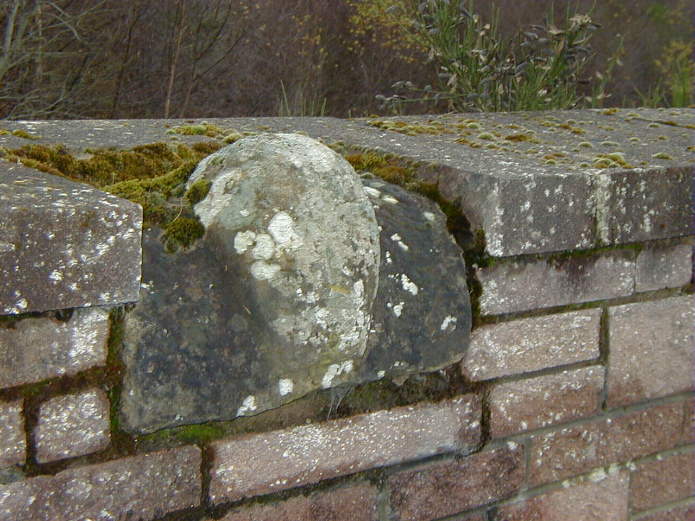 This discovery inevitably raised the questions:- why was the head placed on this particular bridge? What did it signify, and what was its origin? Some partial answer was reported to The Journal of the Highland Railway Society by John Allison last year.2 With the consent of your Editor, I now wish to present more detailed information.

My immediate thought was could this be a carving similar to the one discovered by Peter Tatlow in the viaduct at Killicrankie?3 But a preliminary site visit showed that the Balavil head was quite different and its appearance indicated considerable antiquity. Further examination of the bridge revealed the number 39 and a date of 1977 incised in the stonework of the opposite parapet. The plot thickens:- we have an ancient carving in a modern bridge! Why was a new bridge constructed in 1977? A comparison of OS map 27 of 1957 with that of OS Landranger map 26 of 1981 confirmed a change in the road alignment at Balavil. Prior to 1977, the A9T executed a dog-leg crossing the railway at right-angles, (a good example of rail alignment having priority over road in the 1860s, when the Inverness-Ross-shire Railway was constructed). At some period in 1977 the A9T was realigned with the new bridge now crossing the line at a much more acute angle and thus eliminating what must have been a very dangerous corner. Further help was now provided by my good friend, Frank Spaven of Inverness in introducing me to Mr. David MacKenzie of The Highland Region Roads and Transport Dept. He fortunately remembered the realignment of the A9T at Balavil. This was part of a general upgrading of the then main artery north from Inverness as a response to an anticipated increase of traffic on this road associated with the developing North Sea oil industry, in the Highlands.4 The Scottish Office in Edinburgh had commissioned Sir Alexander Gibb & Partners to design a new bridge and road realignment at Balavil and Messrs. R. J. McLeod (Contractors) Ltd. of Dingwall successfully tendered for the project. A trawl through the local newspapers, The Ross-shire Journal and The Highland News, for 1976-78 yielded nothing whatsoever in terms of news on this project!

A telephone call to R. J. McLeod's in Dingwall, explaining my interest, resulted in an invitation to visit and to meet Mr. Donald MacKenzie. Here I struck gold! Mr. MacKenzie was the civil engineer in charge of the Balavil Bridge project way back in 1977. He has retained vivid memories of this job, since it was his first "Big Project" and was delighted to reminisce about those days. Furthermore, probably because it was his first important work, he took a whole series of photographs recording in detail the progress of each stage of the construction of the new bridge and the destruction of the old bridge and preserved them in a personal album. He confirmed immediately that the Devil's Head carving had been installed in the old original bridge.

Mr. MacKenzie kindly gave me permission and a loan of the album for me to have copied all of the photographs which will be lodged with The Highland Region Archivist for preservation and should be available for future study. Looking through the album, we see that work commenced on February 4th 1977 with the preparation of the foundations and construction of elongated reinforced concrete parapets alongside the rail track just north of the existing bridge. This lasted until June, when placement of precast concrete beams across the abutments was begun. By August, the decking was complete, waterproofing and kerbing on the north-west side laid and a parapet erected. By this time the parapets on the old bridge had been demolished, but saving the Devils Head. Now came the fun bit, demolition of the old bridge. The last train through the old arch was photographed headed by a Type 2 Birmingham & Derby Diesel locomotive. A mat of old sleepers was laid to protect the track bed below the old bridge and down she came! Removal of the debris then allowed completion of the south-east side of the new bridge, which takes us to December 1977. But it was not until February 1978 before the new approach roads were completed. One of the last tasks was to line the parapets with Tarradale sandstone and to install the Devils Head into the south-east parapet, exactly one year after the work commenced. All of this seemed to be accomplished with a minimum of interference of the normal running of the trains.

Thus we now know why the carved head was installed in the "New" bridge i.e. to preserve what must have been an important feature of the original bridge. But we are ignorant still of what this originally signified and when it was originally installed. Nor did the local press provide any answers. So with further help from Frank Spaven the net was cast wider. We discovered that Mr. Alasdair Cameron of Muir of Ord also had been enquiring about the Balavil bridge and after contacting him, I quote, with his permission his reply :- "I note your query on the railway bridge, known locally as The Devil's Bridge or Balavil Bridge, since it is close to the road leading to Balavil Farm. The stone in question was regarded by local youths as the head of The Devil. I took the opportunity whilst, last week, talking to the Muir of Ord Over-Sixties Club to ask the combined wisdom could anyone tell me about the stone. The result was that handed down through the generations, the story is that a young motor cyclist struck the parapet of the original bridge and was killed outright. However, the trace of blood left an outline of his face, which was then carved to produce a memorial, which is what we see today!" A somewhat macabre memorial to a tragic event at this obvious dangerous corner. To me, the appearance of the very weathered state of the carving suggests its origin belongs to an age much greater than the era of motor cycling adventuring. I think, therefore, that we should regard this story as something of a myth, unless a further trawl of the local newspapers from say 1880-1940 would reveal a confirmation of this event. Any takers for this arduous task? I would wish, instead, to offer an alternative theory, always conscious that it will probably be very quickly shot down.

In their report on the site survey of Davids Fort at Balavil, the North of Scotland Archaeological Society included a summary of the local medieval history entitled "Potentially Significant Dates". This spanned the period 721-1882 AD! (someone has been beavering away). A reading of this summary gives us the following items that could be of relevance to our story:- Davids Fort is located close to the old north-south route and overlooks an important ford across the River Conan. It also lies close to Conan House, supposedly built on the site of a medieval settlement. Within the grounds of Conan House there is the site of a church, St. Brigids of Logie Wester, built circa 1490 that was the centre of a medieval parish. This church was recorded as falling into complete disuse by 1750. Furthermore, the relevant section of the OS map reproduced in the report notes the site of a church graveyard within the grounds of Conan House. Now on contemplation of the carved head, the lack of any facial details stands out and suggests to me the representation of a skull. Skull depictions representing death are commonly found on medieval tombs and gravestones. What we see on the Balavil Bridge could be a medieval grave marker "rescued" from the nearby ancient graveyard. Found by the masons constructing the original bridge, it was incorporated into the bridge as a joke or to memorialise some particular event at that time. Alternatively, the carving was stored for some future possible use by a local resident. The tragedy of the death of the young motorcyclist at the bridge then provided a fitting use for this object.

You dear reader, may have wondered at my choice of title, since I only briefly discussed the Killiecrankie carving. The two heads do however have something in common in that we still do not know the true meaning of either carving. However my title is also a tribute to my colleague, Frank Spaven, without whose knowledge and help this investigation would have quickly foundered. Yes indeed, "Two heads are better than one!" Meanwhile the team at 221B, Albert Street await further developments with eager anticipation.

Acknowledgements:- My grateful thanks are given to Messrs Frank Spaven, John Allison, Donald Mackenzie, David MacKenzie, Alasdair Cameron, Roger Piercy and Mrs. Sandra Law for all their help with the research and writing of this article.

1. The North of Scotland Archaeological Society was formed by a group of people, who took up a challenge of a Distance Learning Course run by Aberdeen University in association with the Highland Council Archaeologist. The main aim of N.O.S.A.S. is to promote and encourage archaeology in the North of Scotland. The Society organises field-walking expeditions, site prospecting weekends, participation in digs, guided walks and lectures on Archaeological topics, further information about the Society and joining can be obtained by contacting Mrs. Sandra Law (Hon. Secretary) Tel: 01479-873344. (back)

4. It was not until around 1982 that the new A9 with its Kessock Bridge crossing the Beauly Firth and a Causeway crossing the Cromarty Firth was finally opened. (back)