A recent photograph of Scotscalder station after its recent facelift to prepare it for the 125th Anniversary celebrations last year. The station notice boards are painted in the brown of the Highland Railway, the violet of ScotRail and the maroon of London, Midland and Scottish.

Scotscalder station is in the ownership of member Daniel Brittain-Catlin who is also responsible for the museum on Dunrobin Station. 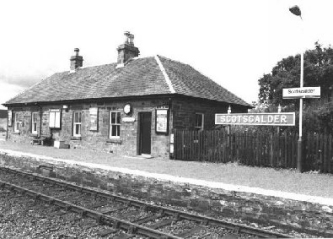 Editorial note: I can now publicly thank member John Forsyth, Evanton for making available the photograph of the Shin Viaduct footpath in the last issue. Thank you; perhaps we can tempt you to enter our photographic competition?