A View From The Signalbox

Little did I realise when I choose the name for my own personal piece of the Newsletter that I would be getting the chance to visit the Inverness Control Centre. Alan Macarthy, Railtrack Manager, Signalling welcomed the group I was with and gave us an introductory talk on the principles of signaling outlining its development from the earliest of days when men were given the responsibility of using a pole to move the signaling apparatus; hence giving the derivative for policeman, right up to the most modern of signalling methods in the electronic age.

With one's mental image of a signal box being a room with a view of the track and a frame of brass levers, today's equivalent is a bit of a disappointment. However, we were taken through the workings of the electric equivalent of the old signal boxes with its electric display of all the points, lines, train positions, and closed circuit television to view the level crossings. It was pleasant to realise that there are still codes of bell rings and the manual logging of all the decisions made whilst controlling the movement of trains south and east of Inverness. Train movements to the North and West of Inverness are controlled by the Radio Electronic Token Block (RETB) system and at the time of my visit we were only able to observe the movement of a train from Thurso to Wick. However the controller was kept busy issuing tokens to the various maintenance squads wanting possession of parts of the line.

The following description of the RETB system has been taken from the handout that is issued to visitors: 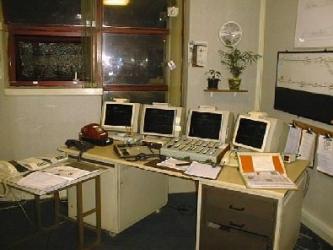 "RETB was invented by The Railway Technical Centre in Derby in the early 80's as a low cost solution to conventional signalling on lightly trafficked rural lines. The world's first RETB controlled line was from Dingwall to Kyle of Lochalsh, which was commissioned in October 1984. Four signalboxes were closed as a result of its introduction.

Following the RETB's success on the 'West' line to Kyle, the system was extended to the 'North' line to Wick and Thurso from Dingwall in December 1985, with a consequent closing of some nine signalboxes. Full RETB commissioning was made in August 1988 when the line from Inverness to Dingwall was brought under control of Inverness Control Centre. The RETB signalbox in Inverness controls about 238 route miles with 14 crossing loops on the lines to Wick/Thurso and Kyle. In addition, it monitors a considerable number of Automatic Open Crossings; Automatic Half Barriers and user worked private crossings. The box is manned by one signalman on each shift continuously from 0001 Monday to 0015 Sunday.

The 'electric token' issued by the signalbox to trains takes the place of the old fashioned 'Electric Token' formerly handed to each driver as his authority to be in a single line section. Each driving cab is fitted with a Cab Display Unit (CDU) with a unique four-digit number. The train driver requests the appropriate token for the journey to be undertaken, the RETB signalman keys up the driver's request on the console and, provided the route is proved available by the Solid State Interlocking (SSI), a 'handshake' between the CDU and RETB box takes place over the radio and the appropriate token is displayed to the train driver. (e.g. Dingwall - Muir of Ord). The radio is not discrete in that radio messages may be heard by all users of the system, this in effect, acts as a safeguard in the event of erroneous information being given to a driver by mistake.

The crossing loop points are of Hydraulic Spring design which restore to the normal position (left hand side) following the passage of a train in the trailing direction over them. A yellow lamp gives the correct indication that the points are set. Conversely, a plunger operated by the driver to select the appropriate route north or west controls the junction points in Dingwall.

Should radio communication fail there are backup emergency 'phones at each token exchange point and dictated 'card' system of working would be introduced over the affected portion of line. There are a voice recorder and printer backups of keyboard entries, which may be used following an incident should the need arise."

Take up the challenge!

It is time to give this newsletter a title. Various suggestions have been made amongst the committee, but we want contributions from you - the membership.

So don't be shy, give it a go, who knows, you might just have the snappy title we are looking for.

Please send your contributions to the Editor and we'll make our choice at a subsequent committee meeting.