Helmsdale Comes Back to Life - Part 1

By Michael Willmot, who also took the photos

Major restoration work is now complete at Helmsdale Station House and furnishings and fittings will be installed over winter so that the accommodation can be ready to receive guests from spring, 2014. The station website at www.helmsdalestation.co.uk has been launched but is not yet fully publicised as it continues to be refined. Updates in Far North Express will tell of some of the secrets given up by the building during restoration. In this first part, the floors tell their story. 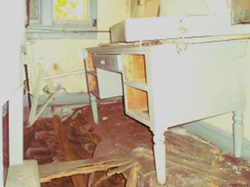 The floors in the building are all wooden; those upstairs were generally in good condition although woodworm was getting a hold and treatment was required. The floors downstairs told a different tale. Those in the rooms adjacent to the platform were completely rotten making entry extremely hazardous. Apparently, the problem started when the original low Highland Railway platform was raised to the current 3-foot height (when would this have been?) and all the underfloor cavity vents were blocked up. With no ventilation the demise of the floor was inevitable. (A lesson for anyone who does likewise when laying a patio or piling up earth: Ed.) Excavation of the cavity before a solid floor was put in revealed a channel from the station office (the room standing forward on the platform) under the platform to the track. There was at some time a lever for a switch or signal operated from within the station office.

A surprise was the discovery of a 'secret' staircase, sealed off, leading nowhere and forgotten for many years. The bottom of this staircase, behind a plaster and hessian 'wall' which had been constructed to block it off, is immediately inside the door to the station waiting room. 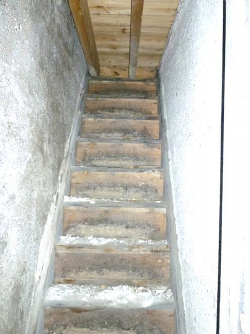 Apparently this was the access to the upstairs, second class waiting room - a staircase narrow and mean, but clearly well used as the scuff marks on the risers show. The upstairs room was later incorporated into the Stationmaster's accommodation as an extra bedroom when the stairs were sealed off. This room is the only one in the building which has completely plain, unshaped skirting boards and no fireplace - second class passengers did not merit more!

Somewhere in the accounts of life on the line there is a description of a train running north of Helmsdale in winter having its way blocked by a snowdrift and returning to Helmsdale where the passengers took refuge in the waiting rooms. The Stationmaster was petitioned by the second class passengers to allow them to join the first class passengers in their waiting room which had the luxury of a fire. My recollection of the account is that the Stationmaster only allowed this after five or six hours of waiting. I don't recall in what year this incident occurred as I read it some years ago before the layout of the station waiting rooms was understood and now cannot locate it. If any reader knows the book in which it is included I would be very pleased to hear; we would like to include this account alongside the stairs which are being preserved as part of the history of the building.