The day got off to a start with the following items of publicity:

Railway milestone will be marked

by Willie Morrison Press and Journal 19/7/99

Railway enthusiasts in the Highlands next week celebrate the 125th anniversary of completion of the Far North Line between Inverness and Caithness.

The line was constructed in stages from 1862, with the final last huge loop from Helmsdale to Caithness finally opening to Wick and Thurso on July 28, 1874. The anniversary is to be marked with a week-long photographic and model vintage railway exhibition by Friends of the Far North Line at Helmsdale's Timespan Heritage centre and a photographic exhibition by railway enthusiasts at Thurso Station.

On July 28, ScotRail will name a class 158 diesel unit at Inverness, before waving it off to Caithness on the 11.05 passenger service. 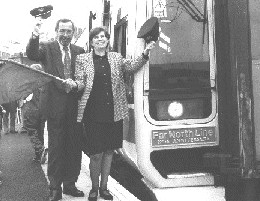 It will stop at Dunrobin halt near Golspie for a short ceremony to rename the stop Dunrobin Castle Station. The Countess of Sutherland, whose ancestor the third Duke of Sutherland pioneered and paid for much of the railway construction in the county, is expected to attend. Railtrack is also to unveil a plaque on that day at Wick Station, the furthest point on the line from Inverness.

ScotRail expects the replacement of the current Class 156 diesels with Class 158 diesels to cut several minutes off journey times between Inverness and Caithness. The future of the 161 mile line, which travels through some of Britain's most beautiful and varied scenery, from lush woodland to the country's most barren moors, seems at present more assured than for a longtime, with the return over the past three years of gradually increasing industrial and timber freight traffic. A regular freight service provided by private railway freight company EWS now runs weekly on the Far North Line.

Next Wednesday sees the 125th anniversary of the opening of the 161 mile Far North rail line. ScotRail is celebrating the anniversary of completion by naming the line's first-ever Class 158 diesel unit, at a ceremony in Inverness, on Wednesday, before the 11.05am passenger service to Wick and Thurso. The final section from Helmsdale to Georgemas Junction was completed and opened on July 28, 1874. The line offers a wide range of scenery from the farmlands along the Moray Firth to the sparsely inhabited area of the Flow Country.

The line survived earlier closure threats and is now recognised as a vital transport artery in the North Highlands, according to the Friends of the Far North Line, the voluntary support group. The Friends said yesterday stations are being improved and freight traffic using the line is growing and with improved connections at Inverness the line gives same-day access to almost all of the UK. From July 24 - 31 Friends of the Far North Line is in charge of a display at the Timespan Gallery, Helmsdale.

The morning southbound train collected 2 invited guests from each station and yours truly took the opportunity of taking photographs and doing a little towards publicising the Friends, a role that was then taken up by our Chairman, John Melling for the rest of the day. We are grateful to those of you who joined the Friends or renewed your membership, thank you.

On arrival in Inverness invited guests attended a reception in the Station Hotel where they were joined by ScotRail and Railtrack management, councillors and local guests. After suitable time for refreshments everyone made their way onto the platform for the naming ceremony conducted by Alastair McPherson and Councillor Alison Magee, Lairg, vice-convenor of the Highland Council. In his speech, Mr. McPherson promised faster journey times with at least 15 minutes removed from the journey time when the new air-conditioned trains start running regularly next May. With buses currently taking around 3hrs 30 minutes between Thurso and Inverness the shortened journey time for rail to around 200 minutes will enable the train to compete on end-to-end timings. He stressed that the £2.5 million refurbishment programme will bring new standards of comfort and reliability.

There was entertainment en route and among those on board were Jamie Stone MSP for Caithness, Sutherland and East Ross and Far North development officer Frank Roach who played a major part in the arrangements for the day. Lunch, airline style, was served courtesy of Railtrack.

The next event for the day took place at Dunrobin where the train stopped long enough for the Countess of Sutherland, assisted by John Boyle, ScotRail Public Relations director to unveil the nameboard, re-naming the station 'Dunrobin Castle'. The nameboard is in keeping with the recently restored historic building.

Next 'stop' in the day's events was Helmsdale where the train was greeted by Friend's secretary Keith Tyler who takes up the story; "From 24th - 31st July we marked the 125th Anniversary with a modest display in Timespan Heritage Centre. By courtesy of Tom Coombs and Frank Spaven, to whom hearty thanks are due, this took the form of magnificent models of three gauge 1 Highland Railway locomotives, coaches and wagons from the fine Kennedy Collection. These provided a considerable talking point - not least to one young admirer who announced, "Now that's what I CALL a train!"

"The choice of Helmsdale was very appropriate. The railway reached Gartymore in 1870 and Helmsdale a year later; for 3 years this was the northern terminus, complete with engine shed, repair shop and goods facilities, while work on the final section to Wick and Thurso was constructed.

"We were allowed the use of 'The Helmsdale Room' in Timespan, which by happy coincidence houses three splendid photographs of Helmsdale said to date from 1870, of great interest in themselves and one of them showing the new terminus with a train. (Incidentally, on careful examination we beg leave to suggest these were taken in late April or early May, 1871.) We are most grateful for the co-operation of 'Timespan' in making it possible to mount this display at relatively short notice, and affording us the use of their facilities." In Wick station Jamie Stone MSP unveiled a commemorative plaque to mark the completion of a £1 million refurbishment scheme at Thurso and Wick stations. During his speech he made reference to our past Chairman, Caithnessian Harry Miller, and referred to the railway industry's efforts to secure the line's future. Mr. Stone then took a 'phone call from the Mayor of Penzance, Jackie Aitken 'phoning form Penzance Station at 900 miles the furthest away station which has also been recently regenerated. Passengers in Wick were served a Cornish cream tea whilst a bottle of Caithness whisky, Old Pulteney, had been sent to the Cornish station manager to enable him to join in with the celebrations.

Meanwhile at Thurso Station, John Williamson and Bill Thompson had set up a display of local railway photographs and memorabilia. The return journey was uneventful with the most notable happening being the driver's ability to demonstrate very clearly the ability of the Class 158 units to achieve 200 minutes for the journey time by making up 15 lost minutes in the last stage of the journey.

My thanks to John Melling and Keith Tyler for their eye-witness accounts, articles and photographs in the John O'Groat Journal for Friday July 30, Caithness Courier for Wednesday July 28, the Press and Journal for Thursday July 29, Northern Times for Friday July 30 and Peter Semmens article in The Railway Magazine for October 1999 enabling me to fill in the gaps of my knowledge of the day.