Problems on The Kyle Line

Shortly after Christmas, there was another landslide closing the A890 alongside Loch Carron. The media reported that a member of the motoring lobby was suggesting throwing the railway into the loch and allowing the road to take its place. Fortunately, the suggestion was ignored by the transport authorities. With permission of the Branch Line Society and with the kind agreement of the Friends of the Kyle Line , we are reproducing below some entries from the former's Branch Line News that appeared during the construction of the A890.

[BLN 134, page 3, 30 July 1969] Dingwall - Kyle of Lochalsh: During the latter part of May and early June [1969], this line was suffering from the effects of a landslide which occurred during the construction of a new road between Strathcarron and Stromeferry. Passengers had to travel between Kyle and Strathcarron by road, crossing Loch Carron by Strome Ferry en route.
[BLN 151, page 46/70, 8 April 1970] Dingwall - Kyle of Lochalsh: Due to a further landslide occurring between Attadale and Stromeferry, services west of Strathcarron were suspended from 2nd December [1969] until limited services were reintroduced from Monday 16th March [1970]. Rock falls have been occurring since construction commenced on the building of the new road from Strathcarron to Stromeferry, which crosses the railway by a level crossing at the west end of Strathcarron station, controlled by full-size lifting barriers. To prevent future blockages by rock falls, twin avalanche shelters are now being constructed, one for rail and one for road traffic. At present trains are only operating during the hours of daylight, the 04.55 Kyle/Inverness being cancelled and the 17.40 Inverness/Kyle terminating Achnasheen.
[BLN 157, page 85, 1 July 1970] Dingwall/Kyle of Lochalsh (p.46/70): During April, the 17.40 ex Inverness commenced running again through to Kyle of Lochalsh and will continue to do so during the summer months. A very heavy speed restriction, 5 mph, is still in force past the site of the road construction and rail traffic is controlled by special colour light signals controlled by the contractor. Some realignment of the track may have taken place while the line was closed, as at one place the new road may well have been built on the old trackbed and the line moved further out into Loch Carron. Limited freight train services have also resumed, but the 04.55 ex Kyle of Lochalsh is not operating and seems unlikely to be reinstated. Buses, up to six being required on certain dates during the Summer, convey the passengers off the Stornoway boat to Inverness direct, no service being offered to or from intermediate stations. Reduction of service again seems to be likely in the Autumn, as trains can only operate safely during the hours of daylight.
[BLN 159, page 98, 5 August 1970] Dingwall/Kyle of Lochalsh (p.85/70): The 04.55 Kyle/Inverness resumed running on Monday 13th July; thus full passenger and freight services have now been restored. The road avalanche shelter, on the landward side of the railway, has now been completed and while rail shelter is being constructed the railway will be diverted through the road shelter; this diversion is expected to take place shortly. For about ¾ mile between Attadale and Stromeferry the line has been slewed on to a new trackbed to the seaward of the original, this work being completed one weekend last summer (1969) and giving a very rough ride to trains during last August. The new road now occupies the former trackbed. 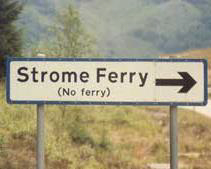 It was the opening of the road which led to the withdrawal of the Strome Ferry and gave rise to the famous road sign shown right. The level crossing at Strathcarron referred to is now of the infamous Automatic Open Crossing Locally Monitored variety. The Stornoway boat mentioned was the Loch Seaforth which operated from Mallaig, Kyle and Portree; for a time, it also served Applecross. In 1972, shortly before the Stornoway route was transferred to Ullapool, she was transferred to Oban and, in March, 1973, hit a rock in the Sound of Gunna. She was towed to Tiree but sank whilst being pumped out and blocked Tiree's only pier for six weeks. She is the only MacBrayne's/CalMac vessel to have been written off whilst in passenger service.