The photo below shows the staff at Conon station in 1920. James Morrison, the stationmaster, is seated. Those standing are (left to right) John MacKenzie (porter), lain Morrison (junior clerk), Sam MacKenzie (porter-signalman), and John Chalmers (porter-signalman). James Morrison started on the Highland Railway (HR) at Dalcross as a junior clerk and was later posted at Kincraig (on the Highland Main Line (HML) between Kingussie and Aviemore and now only a passing loop); Tain; Thurso (1899); Murthly (also on the HML, north of Stanley Junction between Perth and Dunkeld); Attadale; Invergarry (on the North British Railway (NBR) branch between Spean Bridge and Fort Augustus); Redcastle and Avoch (both on the Muir of Ord to Fortrose branch); and Conon. He died in 1923. Notice not only the rare posting as HR stationmaster at Invergarry, which was on the NBR, but that that station ranked between Attadale and Redcastle. His son lain, in the photo, began his railway career with the HR and also became a stationmaster, retiring from that post at Greenhill (between Croy/Cumbernauld and Camelon/Larbert and still visible from the Edinburgh - Glasgow main line) when the station closed in 1966. 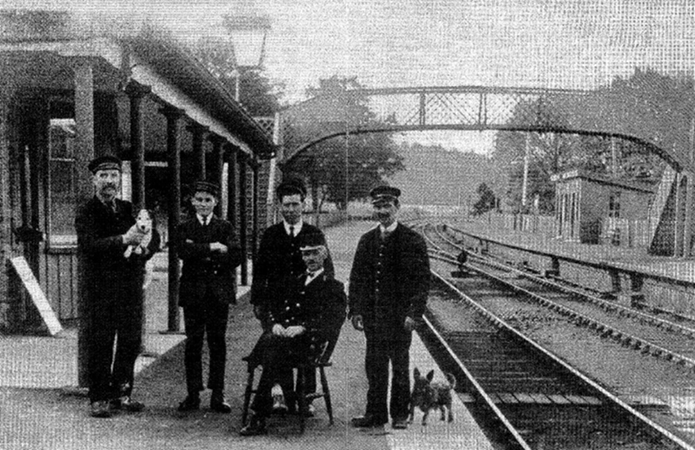 Conon station was opened in 1862 as a wayside station, but not a block post. It became a block post, but without a crossing loop, in about 1893, while the crossing loop was added in 1911. The original platform is the one the photographer (who is facing Inverness) is standing on (and the one which is currently being partially rebuilt as Conon Bridge), the new one being that on the other side, the Down platform. Curiously, the older platform has the concrete edging while the newer one is timber lined. This concrete edging was relatively recent when the photo was taken, for it does not appear in the Locomotive & General Railway Photographs Company (L&GRP) photo of the station shortly before the loop was built. (This photo appears in Peter Tatlow's Highland Railway Miscellany.) The building appears to be original, and to have had relatively little alteration over the years.

In the background can be seen the Up starter and the Down home signal, with the repeater arm below it. Notice also the intermediate Down home signal whose arm is partially hidden by the footbridge. These two Down signals are off for a train, but the starting signal must be at danger, for the repeater is on. All of the signals at Conon were worked from the one signal box, with the booking office having a control of the starting signals. There was no separate lever for the repeaters, so the staff could not choose whether they cleared or not. The rods from the booking office levers run out beneath the boarding to the right of the small dog on the platform. Out of sight at the south end of the station there is a ground frame for working the points there. Notice the point rodding here to work the crossover and interlock the south end ground frame. It is not covered in by timbering as it would have been at more exposed locations, but the cranks and compensators have been boxed in. (The compensators reverse the direction of motion of the point rods to allow the effects of expansion to be eliminated.)

The crossover in the middle of the loop is conspicuous. This was provided here, as at a number of other places, early in the twentieth century to avoid the need to use the tail rope to place wagons in the sidings. Tail roping was a dangerous practice, which injured many railway staff, and the Board of Trade (the body that was then responsible for approving railways and investigating accidents) devoted a lot of attention about this time to minimising practices which injured staff.

Conon station closed in 1960, along with many other stations north of Inverness, and the signal box and crossing loop were closed in the following year.

This article and photograph were originally published in the Highland Railway Journal and have been reproduced with their kind permission; some additional information has been added. Sadly, the reproduction of the photo does not do justice to some of the detail referred to in the text.