In Newsletter 56, I reported that trials were under way to see whether the installation of short barriers at Automatic Open Crossings Locally Monitored (AOCLs) would be feasible. On 1st June, 2012, I went as a guest of Network Rail (NR) to see for myself what was involved. The original plan had been to trial the installation at the two AOCLs in Ardrossan, but that at Ardrossan Town was quickly abandoned as the road is a full double width and the road traffic moment was thought to be too high for useful results to be obtained. Its place was taken by an AOCL in Cumbria where there has been a recent fatality.

The site at Ardrossan Harbour remained, however, and this was where this photograph was taken. 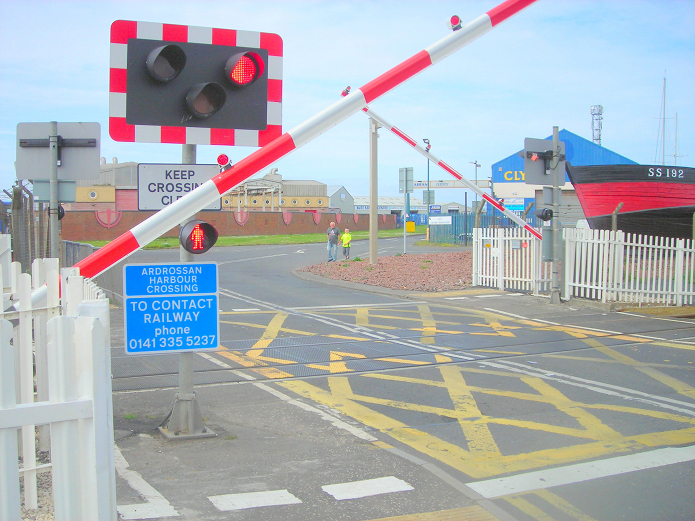 The new electronics sit in a grey box, similar in size and location to the existing boxes, containing the kit for activating the flashing lights and the steady white light telling the train driver that the red wig-wag is operating correctly. As far as the train driver is concerned, the upgraded crossing (known as an AOCL+B - work it out!) looks exactly the same as an AOCL. A white light will show and, if it does, the train may proceed. So it's still locally monitored.

As far as the road user is concerned, the crossing will be hard to distinguish from an Automatic Half Barrier (AHB). The barriers will be a bit shorter, but to the casual eye, the difference will be hard to detect. The red lights will stop flashing as soon as the train has passed, and the barriers will start to rise. (For technical accuracy, it should be noted that at an AHB the barriers rise half-way and pause before the lights stop flashing - a fact unknown to the majority of people.) There will still be car drivers running the lights of course, but the railway can do little to stop idiots determined to swerve round barriers, or whose journey is so vital that crossing must be attempted as the barrier comes down.

It should be emphasised that installing barriers is not an upgrade - the line-speed and other limitations of an AOCL remain. [With experience in use, though, it is hoped that line-speeds may be able to be increased in the future - Ed.] The reason that the cost is so much lower than that of an upgrade to AHB is that nothing is done which interfaces with existing signalling or track infrastructure. The operation of barriers is set off by the train striking in, a process which already starts the flashing lights; the circuitry for the barrier operation is taken from the existing electrical wiring.

As readers may have read elsewhere, NR announced the success of the trial and, amid much fanfare from politicians, said that the programme to upgrade all AOCLs (not just the Highland ones) would start immediately. I was told that priority would be given to those crossings with the highest usage, all being completed within 2 years. The first tranche will be Corpach, Brora, Kirkton and Dalchalm. I had hoped that Halkirk would be given priority because of the triple fatality, but I am delighted that it will be upgraded to what the Press & Journal describes as "a full-size barrier with so-called curtains which block off the entire road" instead. Indeed, NR's press announcement says, "Those open crossings not suitable for this system will have [a] conventional barrier system installed." Whether this means an AHB or a full-width automatic crossing is unclear. The cost will be £4 million for around 20 upgrades - about one-fifth of the cost of installing a new AHB from scratch. This is because an AOCL+B doesn't require any change to the signalling system which already "knows about" the AOCL.

It would seem, therefore, that the combination of high-profile fatalities, close shaves, political pressure and quiet behind-the-scenes campaigning has delivered the safer crossings. We know the railway is safe; it's now able to reduce the risk to passengers arising from foolish or incompetent road users.

Since the above was written, I have attended the 2012 Global Level Crossing Symposium in London at which NR reviewed its progress with improving level crossing (LX) safety. It is on target to close 700 crossings by the end of Control Period 4 in March 2014, and is spending the better part of £200 million making improvements. It is hard to believe that without the tragedies at Halkirk and Elsenham (where two teenaged girls were killed by a second train) this spending would have been authorised. NR appointed a new head of LX safety, Martin Gallagher, whose commitment to reducing risk was evident in the presentations he made at the Symposium.

The following week I attended the regular Office of Rail Regulation's Railway Industry Advisory Committee (RIAC) meeting at which a presentation specifically about the AOCL+B work was given. Much of the detail above was gleaned from this presentation. The current cost estimate is around £150,000 for each site. However if doing a large number brings the unit cost down to something around £120,000 (as it ought to) then all AOCLs on the network will receive barriers without further delay, rather than the initial 25 or so planned (i.e. all the Scottish ones and a few others). Some sites will give difficulty, not least Lairg and Garve where the angle is acute, meaning that the road distance between the two barriers will be much greater than at a right-angle site. There is thus a greater likelihood of a vehicle being within the crossing when a train strikes in. Although the closing sequence will still be long enough for cars to drive through, I foresee a problem with slow-moving or large vehicles, or with livestock and it may be necessary to install telephones at some sites.

Although, as noted above, the line-speed limitations remain, the ASLEF representative at RIAC thought it likely (in informal conversation) that drivers would no longer continue to reduce speed below that displayed at the lineside as they have been doing since Halkirk.

Mike Lunan is a member of RIAC and is a former Convener of the Friends of the Far North Line.