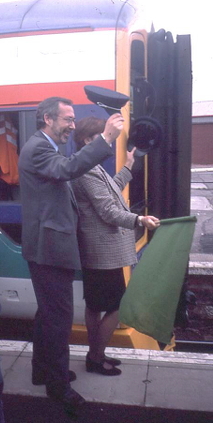 Alastair McPherson, who died unexpectedly on 28th February aged 62, was the inaugural Managing Director of the franchised ScotRail who, during his time at the helm from 1997 to 2001, abolished the &pound3 cycle charge and introduced Club 55.

A Glaswegian born on 6th July, 1951, Mr. McPherson had a background in the bus industry but had always had an interest in all forms of public transport. Having worked in local government in Swansea and Glasgow, he became an operations planner at Tyne and Wear Passenger Transport Executive in 1977 and, in 1990, he moved to National Express. When that company won the initial ScotRail franchise in 1997, he became its MD, overseeing the introduction of the class 170 diesel multiple units and the opening of several new stations in the Central Belt. On the Far North Line he will be remembered for the Tain commuter service whose Dingwall precursor he announced at the Friends of the Far North Line Annual General Meeting in 1997, for bringing Class 158s to the Far North and Kyle lines and for introducing the all-year Sunday service. The photograph shows him at Inverness on 28th July, 1999 flagging off newly-named 158707 with Highland Council Convener Alison Magee - the first passenger-carrying run of that class north of Inverness - to mark the 125th anniversary of the Far North Line. This DMU is pictured on the front cover.

Alastair leaves a wife, Sara, and a daughter, Eilidh, to whom we send our deepest sympathies.