Brora Railway Station is located in the East Sutherland Village of Brora on the Far North Line between Inverness and Thurso/Wick. The village itself has a population of around 1200, but is also a popular visitor destination, with attractions such as the golf, fishing, walking and the Clynelish Distillery.

The village has a rich industrial past, in which the station and the railway have played a significant part since it was linked to the national network in 1871. The local heritage group (Clyne Heritage Society) is active in promoting the industrial heritage of the area and has developed, in partnership with the Brora Community Council and Highland Council, The Brora Village Heritage Trail and accompanying booklet, which features the station as one of the points of interest and importance.

The current Brora Railway Station building was built in 1895 to replace an original version of the building, dating to when the line was first opened. It has now has been unoccupied for over two decades and is in a deteriorating condition. It is a Category C Listed Building and has also been added recently to the Buildings at Risk Register for Scotland.

A Brora Railway Station Building working group was set up in 2004 to investigate a sustainable use for the building at that early stage. A feasibility study was commissioned and a sustainable user was identified. However, over the following 18 months, the waters became muddied and proceedings were delayed, with the result that the identified user lost heart, pursued another option and, in the absence of another sustainable user, the working group ran out of steam!

That is the history and, in late 2013, the Brora and District Action Group (BaDAG) set up a Brora Railway Station Building Sub-group to re-investigate how this formerly beautiful building, now the subject of vandalism and neglect, could be brought back into vibrant life and be a focal point in the village once again.

Contact was initially made with John Yellowlees, External Relations Manager, ScotRail and Andy Savage, Executive Director, Railway Heritage Trust, with whom the sub-group met at Brora on October 14th, 2013. Also invited to attend was Deirdre MacKay, the local elected member of Highland Council.

The productive meeting established that:

With this encouraging mandate from ScotRail and the Railway Heritage Trust, a public meeting was thought to be the way forward. The purpose of the meeting was to elicit ideas for a sustainable use for the building, which would, following refurbishment, be leased to BaDAG from Network Rail (owners of the building), through Scotrail (lessees of the building). Confusing? Yes! 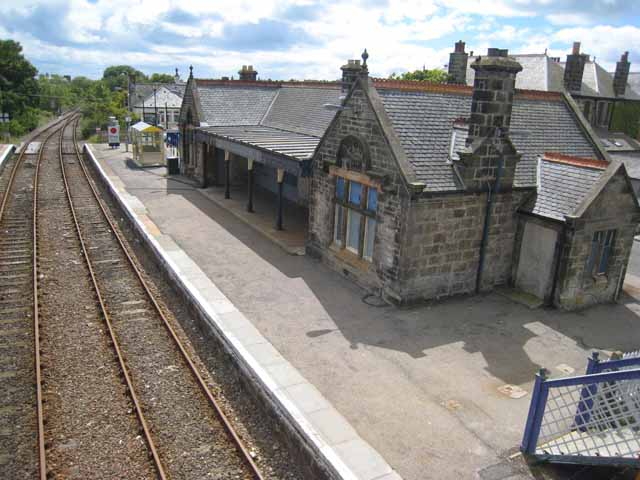 Many interesting ideas, ranging from a boxing gymnasium to a backpackers' hostel, were proposed at the public meeting, but none were considered to be completely independently sustainable. BaDAG, a Scottish Charitable Incorporated Organisation (a SCIO), run entirely by willing volunteers, does not have the resources to operate any businesses itself. Any business proposal for the station building to be considered by BaDAG must be a separate entity, operating independently and sustainably, with a commitment to being a tenant under the landlordship of BaDAG.

In the meantime, some other progress has recently been made in brightening up the station, thanks to the generosity of ScotRail in providing a 'wee train' planter, in which children from our local primary school planted a variety of flowers and shrubs. We hope further planting and tidying will be carried out during the Summer. For those of you with access to Facebook, further information can be found at both the BaDAG and Friends of Brora Station Facebook pages. 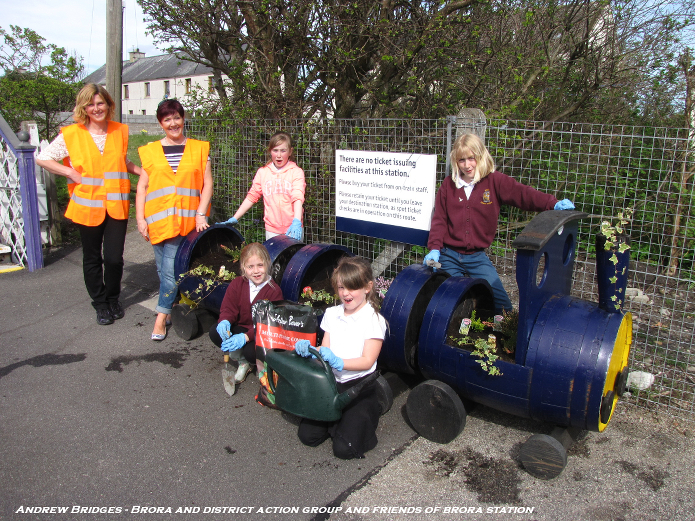 If you either have a once in a lifetime brilliant idea, or know of someone who could put the building to an innovative, sustainable and exciting use, then please get it touch. We would just love it!