A Station Clock Returns to Helmsdale 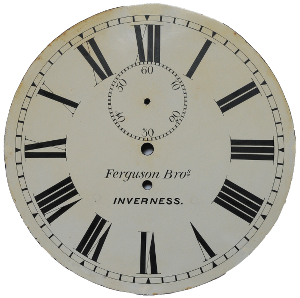 On the back cover of the last edition of the Far North Express, (the Front Page of the web version) the editor was kind enough to publish a photo of the award certificates Helmsdale station CIC has won, displayed in the waiting room and generously photographed by John Yellowlees.

From one of these, the ACoRP (Association of Community Rail Partnerships) award, the station has benefited in a rather pleasing way. The award came with £250 prize money. We resolved to use this on a 'nice to have' addition which would otherwise be unlikely to be achieved. We settled on the reintroduction of the station clock.

This was influenced by the article carried in FNE 64 (January 2015 ) in which Dr Christopher Edwards of The Clock Shop, Chapel of Garioch wrote very knowledgeably about Highland Railway clocks and some attempts to reinstate them. Chris is an antiquarian horologist and clockmaker, contractor to National Galleries and the National Trust for Scotland.

Chris was contacted and was happy to undertake the commission to make a replacement station clock. Our first problem was that the cost, although very modest for the amount of work required, was about 10 times our award money. However we were able to use the award as a co-funding enticement in bids made to the Railway Heritage Trust and to the SSE Gordonbush Windfarm Community Fund. With funding applications granted in full from both we were in a position to meet the full cost of the reinstatement.

Whilst Chris was researching the project he discovered what purported to be the original Helmsdale station clock in the possession of a clock dealer. Sadly it was already sold and beyond our reach. As with many original Highland Railway clocks, this original was made by Ferguson Bros of Inverness. It was a weight-driven clock with a long pendulum which would have had to be wound weekly.

In order to satisfy the railway requirement for an accurate and reliable platform clock, the replacement is required to have a synchronous electric drive. This, like the original, is a double dialled clock. Internally the movement is housed in a mahogany "English dial clock" case of early 20th century vintage, purchased on eBay and suitably refurbished.

The dial is painted and lettered traditionally with Roman numerals. From the rear of the movement a lead-off rod takes the minute information through the concrete wall into the platform-facing slave dial. This dial, with a steel bezel is secured to a wooden baseboard on the external wall, and contains motion-work gearing to convert the minute information to minutes and hours. All this is as the original clock.

Grateful acknowledgment to Network Rail and ScotRail for granting permission for, and welcoming, the reintroduction of the station clock.

To mark its return Chris Edwards, gave a fascinating talk at Timespan (the museum and heritage centre in Helmsdale with which the station has had a number of partnership projects) on 'Clockwork: the Art and Fascination of Mechanical Clocks.' He was also able to give 'Antiques Roadshow' style advice to a few people who brought along clocks for his inspection.

"I am delighted to see that a proper clock will once again be in place at Helmsdale station. There are a few iconic clocks left on the network, but sadly too few, so I especially appreciate this 'reinstatement'".

Down the line beyond Lairg and just outside the Sutherland estates is Carbisdale Castle, financed by the Sutherland family in the early twentieth century for Dowager Duchess Blair (the widow of the third Duke who built the line) as part of the court settlement at the end of a bitter family feud. The Duchess, it is said motivated by spite, chose as the location for her castle a hillside visible from a large part of Sutherland, and especially from the railway line which the Sutherland family would use to travel south. Her unpleasant motive is supported by the fact that the castle's tower only has clocks on three of its four faces - the side facing Sutherland is blank, supposedly because the Duchess did not wish to give the time of day to her former relatives. 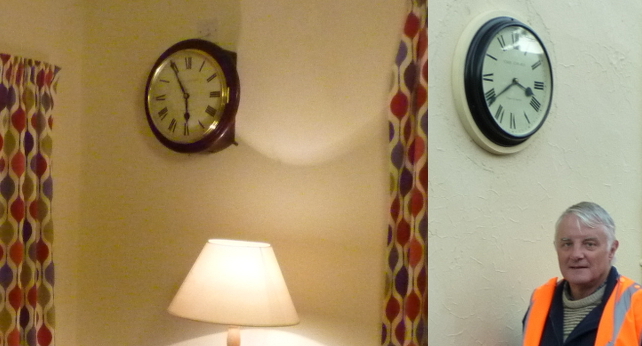 The internal clock drives the external dial via a driveshaft through the wall. Dr Christopher Edwards, the clock maker, is pictured outside, with the platform dial.

At Helmsdale station the exact opposite is the case! We are delighted to be able to give the time of day to all who use the station. The clock adds to the station planter, waiting room and visitor information point, photographic darkroom, book exchange scheme and cycle hire facility (more of the last in the next issue of FNE) which contribute to making Helmsdale an exemplar community rail partnership station.

Michael Willmot
Since restoration of the derelict station building in 2014, well over 100 people have stayed in the self-catering station accommodation; mostly those who would not otherwise have come to Helmsdale and many rail enthusiasts or those relying on public transport. This has brought some extra business to local shops and amenities. Also, as the station organisation is not for profit, its trading surplus of around £1,000 per year - due to work undertaken by volunteers - is donated to local community causes. www.helmsdalestation.co.uk