Some notes by Chris Edwards

At the end of 1995 I was approached by ScotRail in Glasgow in partnership with Gordon District Council (the forerunner of the present Aberdeenshire Council). Between them they had plans to refurbish the redundant station building at Insch by converting part of the one-time Stationmaster's office to a local museum. One of the features they had wished to reinstate was the clock. At the time there was an outside dial which would have given the time on the platform and would have been driven by a mechanical clock movement situated inside the room adjacent to the clock.

The external dial onto the platform retained the original bezel surround, hands and dial with the associated gearing behind the dial (the motion-works) but lacking the movement to drive the dial. The name on the outside dial read P.Wilson, Keith who obviously were contracted to supply clocks to some stations along this line when it was first constructed. Peter Wilson was known to have been in business from approximately the middle of the 19th century.

I was given no brief or guidance as to what was required other than that the movement had to drive the outside dial as it formed one of the "heritage clocks" to which ScotRail had ownership.

The outside dial was completely refurbished with the dial sheet taken down to the metal, painted and re-lettered exactly as per the original. As to what movement to drive it with, I had in my possession two clocks which had been part of the original station fittings from a) Kintore station and b) Old Meldrum Station. These were virtually identical to each other and both bore the name of Hunter and Craighead, Inverury (sic) who were in business at about the time of the construction of the GNoSR.

Without any other instructions I effectively copied the overall layout of the movement and the style of the case in these clocks and put a few touches of my own into the dial and hands. The key was the only part of the clock I did not manufacture.

The clock was subsequently installed in the station building, part of which is now known as the Insch Connection (the local museum which also houses a model railway layout of Insch Station as it would have looked in the 19th century).

Following the successful completion of that project I was again approached by ScotRail and asked to examine a number of other railway heritage clocks. The Inverurie clock, made by Alexander Gill and Son and installed around 1900 when the station was remodelled was restored but has now been replaced by a quartz clock as Health and Safety dictated that the ticket clerk was not allowed to wind the clock as it would have meant standing on a step ladder or chair to reached the winding square. This necessitated a "trained" person coming from Aberdeen every week to wind the clock.

The Art Deco clock in the booking hall in Forres has suffered the same fate as the one at Insch in that there is nothing to drive the external hands. This was reported back to Glasgow.

At Nairn the external dial (also signed P.Wilson, Keith) was being driven by a relatively modern electric synchronous movement, but was very noisy and required restoration which I did. The dial was also improved, and the external bezel painted.

Further afield (for me based in Aberdeenshire) I was asked to look at Rannoch station. Here the external dial and cheap American or German movement was replaced with a synchronous electric movement as there was a convenient power supply adjacent to the dial. The original hands were retained, refurbished and reused.

Finally I was asked to examine the clock at Scotscalder. I must confess I had never heard of this location but discovered it to be south of Thurso. Several hours driving from Aberdeenshire with a multitude of tools and ladders ready for any eventuality brought me to a windswept platform on the edge of the great expanse of the Flow Country of Caithness. The long low station building is now privately owned but the residents had been alerted to my attendance. At the time the station traffic records suggested that only 8 passengers per year used the platform - it is one of the several request stops on the Inverness - Wick/Thurso line. 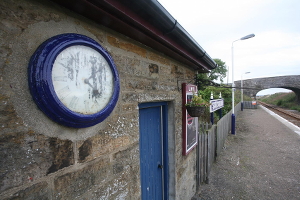 The external dial was signed Geo. Morrison, Golspie which could be seen indistinctly through the rust. A number of reference books of clock makers list George Morrison as having been born at Roskeen in Ross-shire in March 1815. He also had his son working for him as a journeyman watchmaker in 1881. He is known to have supplied clocks to the Highland Railway although this information may have come from the Scotscalder dial alone.

As with the Insch dial the only parts of the original clock installation here were the outside bezel, dial, hands and motion-work gearing immediately behind the dial, which converts the minute information coming from the clock to minutes and hours. The heavy cast iron bezel and glass were removed from the wooden frame, the dial and the hands were removed revealing a large hole through the stone wall of the cottage. This tunnel would have accommodated the lead-off rod from the movement inside the station building to the external dial. Since passing into private hands the hole had been blocked off at its inboard end with a layer of plasterboard. The original clock movement was no doubt removed prior to the sale of the station building. 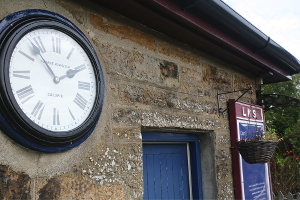 Simply to have a working clock at this location would involve including a synchronous movement connected to a 240V mains supply. However, the only electrical supply owned by ScotRail was a timed system, which operates the platform lighting, and that supply was some distance from the clock. The expense was considered too much, and instead only restoration of the historic dial, hands, bezel and wooden surround was accepted. These parts were returned to the site in due course and reinstalled as a static heritage piece. Indeed, one of the banner pictures on the FoFNL website shows the restored clock dial in position. 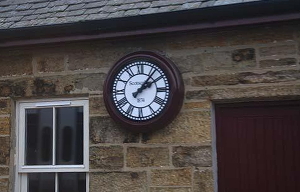 Imagine my disappointment when, on a recent foray to Wick, I noted that all my work was lost as the original clock has now been replaced by an acrylic pastiche of a Victorian skeletonised dial with an opal acrylic backing, and with "Scotscalder 1874" across the dial. Admittedly the new clock is running, so the decision has been taken to install an uninterrupted electrical supply to drive the electric movement, but the history is gone. Mr George Morrison of Golspie will be turning unhappily in his grave! I feel it would have been more satisfactory to have substituted an electric movement for the motion-work gearing and still utilised the existing hands and dial thereby preserving the appearance of the original installation.

The Clock Shop - Chapel of Grioch, Aberdeenshire AB51 5HE