The past six months have been difficult for Far North Line passengers due to persistent poor timekeeping and a high number of cancellations. It is difficult to understand that there was anything wrong with the old timetable, but it was decreed that it had to be changed and this occurred very late in the pipeline for these things.

Each new timetable is supposed to be finalised and made publicly available for passengers to book their journeys up to twelve weeks in advance. The final version of the North Highland timetable (which includes the Kyle line also) was not approved until about four weeks beforehand.

An earlier iteration was put on to the websites and this is illustrated here. Somebody forgot, or was unaware, that there is no longer a crossing loop at Kildonan and they timetabled two trains to cross there at 13:25 each day. Oops! 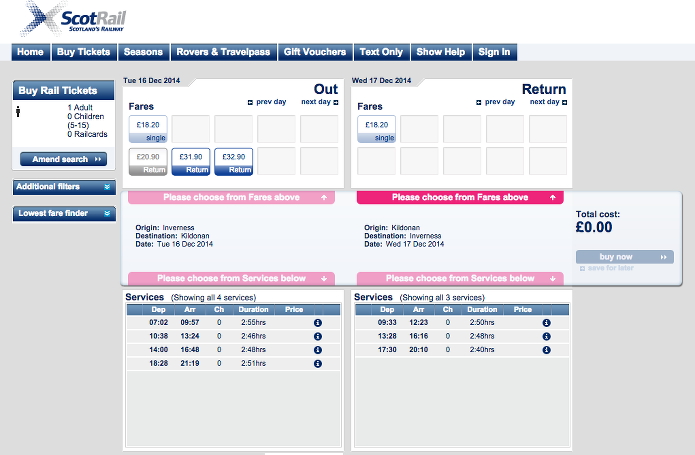 That this should happen and be passed for publication is extremely worrying. FoFNL understands that timetabling expertise has been withdrawn from Scotland and is all now centralised with Network Rail in Milton Keynes. It is yet another example of the fact that the Far North is beyond the ken of many rail operators further south and it further supports the case that a Railway Control should be re-established in the Highlands.

It is also further proof that a loop does need to be reinstated at Kinbrace to allow for a robust timetable to be created and avoid the long waits at Helmsdale when another train is occupying the 35 minute-long over-long section from Forsinard. Area 3 of our CP6 report in this issue makes this point and hopefully the Action Committee currently looking at all aspects of the FNL will also support this conclusion. Some enhancement money does need to be urgently spent on the line to restore passenger confidence and provide scope for more freight and charter traffic. The unprecedented notice saying "This train may run later due to the operation of a freight train" could then be confined to history.