A talk entitled 'The Collapse and Reconstruction of the Ness Railway Viaduct' was given by Adrian Boal at Inverness Field Club on November 19th 2014.

THE RAILWAY BRIDGE TO THE FAR NORTH LINES

One of the triumphs of British Rail in its later years was the immediate commitment to replace the Ness Viaduct when it was swept away in unprecedented floods on Tuesday 7 February 1989. This commitment was fully honoured and a new viaduct was built ready for the start of the summer timetable on Monday 14 May 1990.

FoFNL members enjoyed a lecture on this event courtesy of Inverness Field Club. Norman Newton set the scene with some newspaper accounts of the building of Joseph Mitchell's original five-span masonry arch viaduct in the years up to 1862. Our main speaker was Adrian Boal who had been Assistant Resident Engineer for British Rail on the reconstruction project and possibly the only job in his career where he didn't have running trains to deal with! 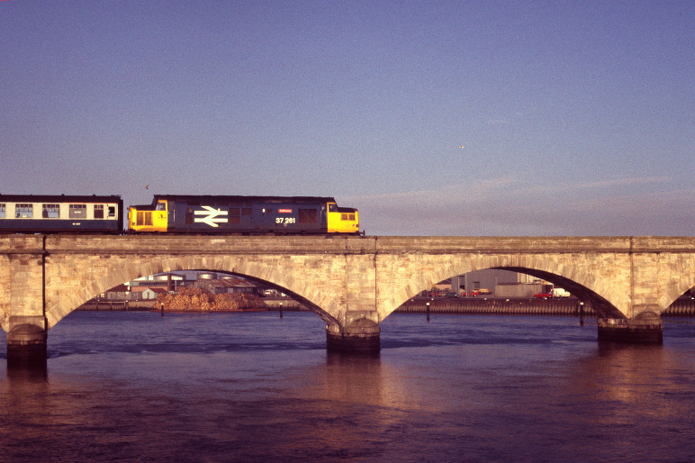 Before its collapse, the viaduct had been carrying 50,000 tons of freight annually. Two passenger and one freight train had crossed that morning before the collapse at approximately 08:20. The signalling cables were still intact and functioning. The bridge collapsed in stages: two spans at 08:20, another at 5pm and another at 8pm. The cause of the collapse was local scouring of the pier foundations - a five metre deep scour hole had developed upstream. 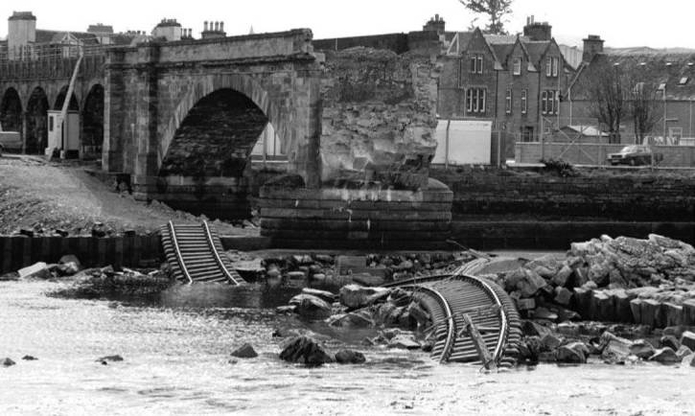 Mitchell's original drawings from 1862 (available on microfilm) showed that he was acutely aware of the dangers of scouring at the piers due to the very steep 1 in 30 gradient of the river bed at that point. The Ness is also known to be the second fastest river in Scotland and has a rain catchment area of some 700 square miles. The modern solution in the reconstruction of the new viaduct was to build a weir in order to control the level of the river bed upstream of the new bridge.

Jamieson Mackay and Partners (JMP) were the Glasgow based consultants who designed the new viaduct consisting of a steel girder superstructure with a composite concrete deck resting on two central piers. The main crossing incorporated the existing masonry abutments with an overall span of 130m (two 38 metre spans and a central one of 52 metres). An in situ 250mm deep reinforced concrete deck was constructed on top of the main girders carrying the reinstated railway track. British Rail acting as the Client had ordered all necessary steelwork in advance of the main works saving months on the reconstruction programme. After all tenders had been evaluated the contract was awarded to the main contractor Fairclough, to start on site in early August 1989. The piling works were subcontracted to Weldex who had to drive piles 38 metres down into the gravel river bed and construct cofferdams to enable the new pier foundations to be built. Once the new foundations and weir were in place lots of protective armour stone was strategically placed in the river.

There was major flooding again over the harsh winter of 1989/90 which hampered working conditions on site and caused difficulties in meeting the construction programme. The new bridge spans were lifted in place by water borne barge, the MCM Shetlander with a 120 tonne onboard crane. This had to be helped into position by two harbour tugs and needed five anchor points set in the river bank for stability.

ScotRail incurred significant extra cost to keep operating the 270 track miles of railway north of the river. Rolling stock and locomotives had to be transported across the breach by road, and a temporary maintenance depot built at Muir of Ord. The new class 156 trains were introduced in May 1989 as planned. Passengers for each train and Red Star parcels (remember them?) had to be taken by bus between Inverness and Dingwall with train services resuming from there.

The impressive new bridge was opened on time and within budget by Malcolm Rifkind, Secretary of State for Scotland, on 9 May 1990. It cost £3.4M to build and Mr Boal is certain it should last for another 125 years. May it continue to carry both passengers and freight a long way in to the future!