A Railman Remembers
8 - One Potato, Two Potato...
Continuing our series of articles by Mark Nolan, telling the story of his early days as a railwayman at Fearn Station on the Far North Line in the 1970s. 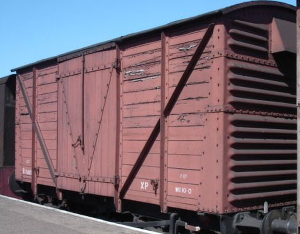 As the potato traffic swung into top gear I started to become intimately acquainted with the covered wagons which were in their final years as the mainstay of British Rail freight workings. They were like sheds on wheels, banged and bashed the length and breadth of the country, carrying an assortment of goods.

They had wooden bodies on steel frames with a pair of heavy doors each side. Step inside and you couldn't fail to notice their distinctive, pungent odour. Not unpleasant, but strong enough to permeate your clothes. They smelled like old, very dry, mature wood which had been aged in ventilated darkness. They were also fairly dirty, having run thousands of journeys with thousands of loads, with no-one responsible for cleaning them.

Although these four wheeled short wheelbase vans could carry up to twelve tons, their design predated pallets and forklifts, and they mostly had to be loaded by hand.

Three local firms made good use of the freight facilities at Fearn; Paterson's of Balintore sent boxes of salmon away on the 3:15 passenger service during the summer, with fishy ice melting over the barrow, the platform and the parcels cage in the guard's coach. They then went south on the Royal Highlander, which was what the Caledonian Sleeper used to be called. (The salmon still get whisked down to London on the sleeper, the difference being now it's farmed salmon travelling in polystyrene boxes, rather than wild salmon in wooden crates. That's progress folks!)

Another firm was Easter Ross Farmers, an amalgamation of several local farms, who dispatched a few vans of potatoes without too much fuss. But the big shot who made the most noise was John O Gordon of Balmuchy, seed potato merchants and suppliers to growers in East Anglia. It was effectively their business which had kept the station open when so many others closed in the early 60s. You got the impression that if John O was displeased, ripples of discomfort would be felt in the Area Manager's office in Invergordon, if not further afield.

The thing about seed potatoes is, as well as being fairly valuable, they're quite fussy. If it's too hot, they start sprouting before they should. If it's too humid, they sweat. Worst of all, if they get frosted, they go black and mushy, then it spreads and the whole load is a write-off.

Now we get to main point of this memoir, and the only hard information in it. To my knowledge, no historian or rail commentator has ever communicated this knowledge, and I may be the only person in a position to do so. So it behoves me to pass this vital snippet on to my children and my children's children. Here we go.

These old vans needed to be wallpapered before any potatoes got loaded into them.

Yes, someone, somewhere, doubtless after an insurance claim for the replacement and disposal of 12 tons of black mush, had decreed that all vans carrying potatoes were to be lined in thick brown paper as insulation to protect against frost.

So, the seed potatoes arrived in hessian sacks behind a fairly old lorry which parked on the goods platform, and a team of men fed the sacks into the vans and stacked them, with lots of straw in between each layer. Except they couldn't start, because I hadn't finished papering the van yet.

This is how you paper a 12 ton goods van for carriage of potatoes:

1    Take a bundle of six pre-cut rolls of brown paper.

Problem, I hadn't cut very many rolls over the summer; it was really tedious job, so I had to cut the rolls before I could get any papering done.

Problem, you forgot the staple gun. Go back to the booking office. The staple gun is not there, maybe you left it in the other van.

3    Walk back through the wind, mud and puddles in the goods yard carrying said rolls of paper.

4    Staple one of the long rolls from the top left end, down and along the length of the floor and up the other end.

Problem, your hands are now frozen, and you can't manipulate wallpaper with gloves on. Anyway, you don't have gloves, this is 1974 remember.

5    Repeat to the right. You now have the two ends and the floor papered. Be careful not to tear the paper now you're walking on it.

Problem, the staple gun has jammed.

6    Free off stapler and use it to fix the two shorter rolls of paper to the side opposite the wagon door; one roll above the other.

Problem, it's particularly hard to hold the paper up sideways and staple it at the same time, it wants to fall out of line.

Problem, the gun has run out of staples. Also you won't be able to get out if you paper across the door, so you have to sort of roll them up and leave them tucked in to the side for the men to affix when they've finished doing the real man's work of feeding in the sacks and straw bedding.

So much for wallpapering vans; a job I could probably do with ease now, but which then I found exhausting and filthy. Hopefully this detailed account will prevent the ancient craft of potato van papering being lost forever.

Once the vans were loaded, they needed a wagon label correctly filled in with the date, weight and destination, often March, Ely, St Neots or Spalding. The label went in a sprung holder outside the wagon. Because the loop had been removed from Fearn, the goods train could only deliver or collect wagons on its way south. Otherwise the engine would block itself in.

To my knowledge, none of my consignments were ever lost to frost, or shunted into the wrong siding for a few weeks on their way to the Fens. But how would I know if they were?

As autumn ran in to winter, to my relief the potato dispatching started to wind down. One Friday afternoon, all the men gathered in the booking office to be thanked and paid by the great man himself; John O Gordon was visiting the station. Ceremoniously, each man was also given a bottle of whisky. Finally John O Gordon turned to me; "And this is for you" he said. There was an expectant, slightly nervous silence. John O Gordon had just handed me a tin of toffees.

Well what to do? In a gentle, highland way, it was his way of saying I was a useless twat who couldn't even be relied on to paper a potato wagon. And I, in my own gentle highland way, had to admit he was absolutely right. There was only one thing I could do. I smiled and said "Oh, I love toffees", and thanked Mr Gordon earnestly. Then I opened the tin and offered them round.