Anthony Lambert, author of Britain's Railways in Wartime, charts the unprecedented demands on the humble Highland Railway during WWI.

No railway in Britain during the First World War was asked to do more with minimal resources than the Highland Railway (HR). This was almost entirely due to the naval bases along the east coast of northern Scotland and in Orkney.

Scapa Flow in Orkney had been used by the Admiralty since the Napoleonic Wars. The decision to develop it as a northern naval base was taken in 1904, based on its threefold ability to control the entrances to the North Sea, place the Grand Fleet beyond reach of a surprise attack and avoid the risk of a fleet based in the Firth of Forth being bottled in by a minefield. However strategic the choice may have been, it took little or no account of the difficulties of supplying the fleet with coal, ammunition and personnel. It relied on the largely single-line HR whose resources were usually taxed only by major sheep sales, tourism and the peregrinations of aristocrats, many in search of field sports.

Coupled with the naval base at Invergordon, the Highlands became an area of such strategic significance that from 25 July 1916, the area to the north and west of the Caledonian Canal and the Burgh of Inverness were declared a Special Military Area. Only members of the armed forces in possession of a travel warrant and civilians with an official pass or a permit book could be booked to stations north of Inverness.

However, it was not coal for the Grand Fleet at Scapa Flow in Orkney that placed such strain on the HR, because the port of Grangemouth was chosen in mid-1915 as the principal destination for railborne coal, to be forwarded by coastal steamer - the HR could never have coped with the millions of tons of dry steam coal that the Royal Navy required.

In the weeks before war was declared, much of the fleet at southern naval bases was moved to Scapa Flow and other Scottish inlets, and plans for this eventuality had been made since 1911. Stockpiles of suitable coal had been created at Newcastle and other unnamed places where North Sea warships could be rebunkered. The first recorded 'Jellicoe Train', as the coal trains became known after the fleet's commander-in-chief, Admiral Lord Jellicoe, left Pontypool Road near Newport on 27 August 1914 for Grangemouth. By 1918 there was an average of 110 coal trains a week, and by the end of the war 13,676 Jellicoe Specials had been operated, carrying over five million tons of coal.

Ammunition for the Grand Fleet was routed through Inverness, entailing construction of a new 1,000 yard branch to the harbour in less than a fortnight. Trains of ammunition arrived from factories in southern Scotland and England for transfer to vessels for delivery to warships.

The passenger equivalent of the Jellicoe Trains was the "Daily Naval Special" train between London and Thurso. At first, attempts were made to accommodate naval ratings on service trains, but this descended into such disorder that a special naval train was instituted from 15 February 1917, running every weekday in each direction and scheduled to take 21½ hours for the 716¾ miles, which made it the longest-distance regularly booked train ever run in Britain.

The HR also came under strain from non-coal traffic for Thurso associated with the Grand Fleet, supplies to the base at Invergordon and the military camps at Cromarty, Invergordon and Nigg, and timber traffic. For the first three years of the war, the goods yard at Invergordon dealt with a daily average of 72 wagons, most a consequence of the decision to use its location on Cromarty Firth as a repair base for the Grand Fleet. This northern equivalent of Devonport employed over 4,000 workmen.

At the beginning of the war whole trainloads of timber, much of it felled in northern Scotland, were required for construction of floats on boom defence works at Scapa Flow and elsewhere. The demand for pit props rose as more coal was required for industry and transport. During 1918 alone the HR handled 293,561 tons of pitwood, much of it felled by the Canadian Forestry Corps. The Newfoundland Forestry Battalion had a camp between Dunkeld and Dalguise, and camps for German POWs with forestry experience were created at Carr Bridge and Lentran.

Even though the HR was not asked to carry coal for the Grand Fleet, it gained new flows of coal traffic for fishing drifters. Before the war this had been carried by coastal steamers, but with the submarine threat, this was considered too risky, with the consequence that at times almost every Far North Line station was blocked with coal wagons from collieries further south. The pressure on the HR main line was so great that many trains were routed via Aberdeen, despite the much greater mileage.

The strain was further increased after the US entered the war in April 1917 with the decision to create a vast minefield known as the Northern Barrage. This envisaged laying 100,000 mines over about 235 miles between Orkney and the Hordaland coast of Norway.

Minelaying began in March 1918, and 70,000 had been laid by November when it stopped. Over four-fifths of the mines were supplied in component form by the US using the rail-connected Dalmore Distillery near Alness and specially constructed sheds at Muirtown Basin in Inverness as assembly points. Before the Dalmore site could be used, 4,500 casks of whisky had to be moved by train to a distillery at Edderton, 21 miles north of Alness. Most of the mine components were unloaded from US vessels at Kyle of Lochalsh and railed to Dalmore. The work required about 1,700 American naval ratings to be based at Kyle, and about 400 trains of mines were dispatched.

Perhaps the strangest army specials from the Highlands were the seven trains that conveyed from Invergordon to Winchester 161 Russian officers and 2,993 men sent by Kerensky's short-lived government to fight on the Western Front. They had arrived on 4 October 1917 in three ships which also carried 300 presumably pro-tsarist refugees who were sent by special train to London. On 9 July 1918 Invergordon received another curious collection of largely Serb troops, but also French, Polish and Czech soldiers who had ended up in Russia; the 470 men were taken by a single train to Southampton en route to France. Russia was the probable destination of the contents of two special trains from London which arrived at Invergordon in December 1916 and January 1917: the first was of four vans of bullion guarded by a military escort in four coaches; the second had three bullion vans and five corridor coaches of guards.

In handling all this traffic, the HR was so acutely short of staff that shifts of 12 hours often extended to 14-16 hours. In evidence to the Select Committee on Transport in October 1918, Sir Herbert Walker expressed that view that "certain companies, such as the Highland, have had very heavy burdens placed upon them in the shape of traffic...I think the Highland has been hit more than any other company". 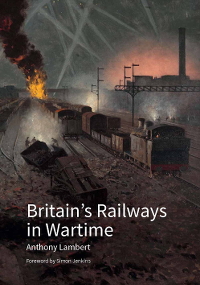