The increased frequency of trains between Inverness and Elgin began with December's new timetable. Five new trains outward from Inverness between 10 am and 7 pm and four inward. The 16.49 will be particularly useful in relieving pressure on the 17.14 to Aberdeen. With a journey time of forty minutes, the service is much quicker than going by bus.

Some of the early and late end to end trains are now operated by ScotRail's "Classic" High Speed Trains giving an improved ride and acceleration.

It is good to see that work is continuing through the winter to redouble the line between Inverurie and Dyce. From May to August there will be another closure at that end of the line to finish the job started last summer of redoubling and resignalling the whole stretch from Inverurie to the tunnel mouth just a mile short of Aberdeen station. 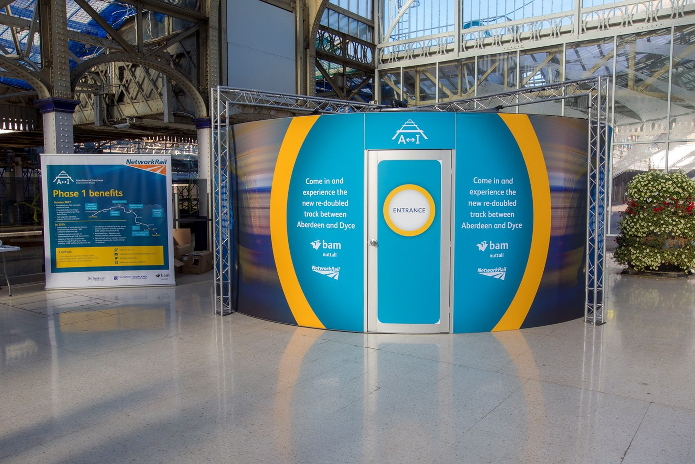 Attention then needs to switch to the Inverness end with money being made available to redouble the track between Inverness and Dalcross (Woodend).

Doing this would enable the required 8 am commuter from Inverness to Elgin to run and (in the present timetable) allow a 10 to 15 minute speed up of the 09.00 Inverness to Aberdeen and the 13.38 and 18.22 services from Aberdeen.

The former could leave at 09.15, the 13.38 would no longer have to wait 17 minutes at Elgin for a path, and the latter would allow the current 20.03 from Inverness to Elgin to leave later and provide a connection with the Highland Chieftain from London Kings Cross.

This double track section would provide greater flexibility to operate the new Dalcross station, operate a replacement siding of some kind at the Norbord wood factory (which was recently doubled in size) and reduce delays. Unfortunately, a second track cannot be replaced all the way in to Inverness because the Raigmore A9/A96 interchange overbridge was constructed with insufficient room for two tracks. Extension for one kilometre eastwards on a new formation to the new station at Dalcross should also be considered and planning permission obtained for a new platform.

HISTORY NOT YET IN THE MAKING

Proposals to build a new station at Dalcross Airport were outlined in a HITRANS leaflet Providing connectivity: Inverness Airport Station which told us "Development of the new station will commence in 2016 with planned completion expected in the Spring of 2019". "HITRANS is investing in the rail infrastructure..."

In its early days, HITRANS paid for a lot of useful smaller items of infrastructure on the Highland lines. Sadly, a change in Government policy saw their budget for infrastructure truncated.

Also of interest is Network Rail Document 116647 Aberdeen to Inverness Rail Improvement quoting the Office of Rail Regulation allocation of Tier 3 funding to allow for development of enhancement projects that could be implemented during the course of CP5. This stated "An initial programme has been developed indicating that GRIP Stage 3 Option Selection report will be carried out in 2011 and implementation works can be completed in 2016". This was followed by another NR document, asked for by Government, which came up with a more detailed timetable to complete the works to the whole line by the end of February 2017.

History has been a long time in the making. Austerity and changes to the way rail enhancements are funded are partly to blame. It is good to be able to report concrete progress in the last year, but there is a long way to go yet to bring the line up to modern standards.