Testing The Track to Wick

It was a sunny January morning when I met Mike Lunan and Richard Ardern at Inverness station for a trip on the Far North Line to Wick. This time we would not be travelling on the 1038 ScotRail service, but on a Network Rail Track Recording Unit.

Unit 950001 was berthed in platform 7, resplendent in a yellow livery and with the sound of the generator, used to power the many electronic devices associated with maintaining a comprehensive record of the condition of the track, adding to the more recognisable 'engine noise'. 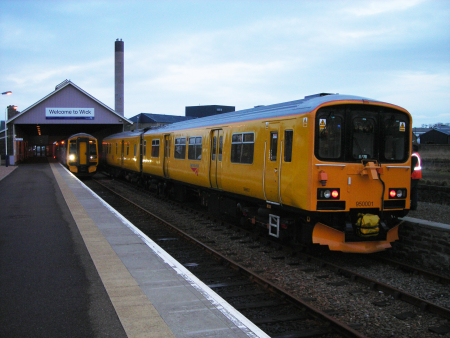 Thanks to an invitation from Ian Barber of Network Rail, we were privileged to be able to get a 'driver's eye view' of the line. Ian was unable to join us on the day but we were welcomed on board by Eddy Locke who gave us a thorough briefing on how everything worked on board this unit, a purpose-built train based on the Class 150 'Sprinter' design.

Apart from the 'technical gubbins' on board, the train has a large kitchen, vital for the crew who spend a lot of time on the train as it visits many rail lines on a 6 monthly basis. While we were sipping coffee and the unit was travelling alongside the Beauly Firth, Eddy was explaining that, apart from the electronic methods of recording the track condition, there was also a small compartment containing an electro pneumatic pump and water based paint mixture! This is still used as a method of visually identifying to the local track Engineers the location of particularly 'rough' stretches of track, whereby paint is fired onto the track in the four foot within 22 yards of an actionable defect, which is still in use in 2009, however the teams are also advised of these location using modern high tech Global Positioning System co-ordinates as well as miles and chains. 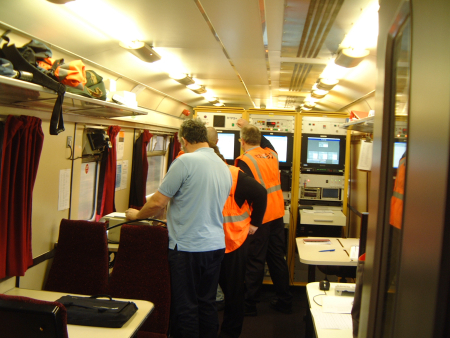 Just as my head was reeling with the amount of technical information I was hoping to assimilate, we were invited to the front cab from where we could see just how much concentration is required to drive a train. The Far North Line has various sections of differing speeds, both permanent and temporary, and excellent route knowledge is needed to make sure all those restrictions are observed.

Mike and I spent some time in the rear cab simply looking at where we had been and getting a different perspective of the Flow Country.

The train ran to time throughout and we alighted at Wick around 1530. Unfortunately we were unable to get a cab view of the line between Georgemas and Thurso due to time constraints but, hopefully, we may be invited on a future trip.

I'm pleased to say that, from what I could see of the recording instruments, the Far North Line is in pretty good nick! Further engineering work will be taking place this year to relay more sections of the line with continuous welded rail, making journeys even more smooth.

Our thanks to both Ian and Eddy and the on-train engineers and other crew who made us so welcome.

Article and photos by Bob Barnes-Watts