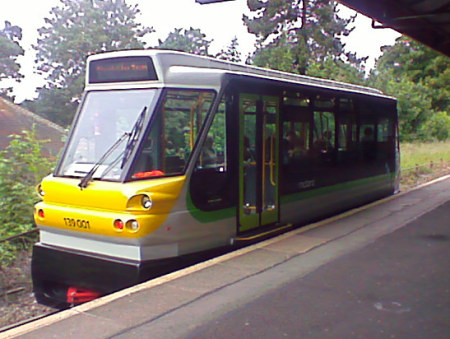 Our former Convener, Mike Lunan reported to committee members on a rail journey visiting the most northerly, westerly, easterly and southerly stations therein while remaining (mostly) in Scotland. I extract the content that relates to his personal views on a possible improvement to the service offered on the Far North Line which would be of major benefit to Thurso and Wick passengers, especially at times of late running or train faults. I publish this to open up a debate as to which direction you would like your committee to follow on this subject.

My trip covered 5 days in June 2009. It was originally planned to occupy only 4 days, but late in the planning process I became aware of the introduction of the Parry People Mover service between Stourbridge Junction and Town in the West Midlands. The distance is officially ¾ mile. It seemed foolish not to make use of my proximity (well, measured from Thurso) to this location when I was in Glasgow. I would not normally make a detour of this size, but I believe that the PPM (or Class 139 as I shall call it hereafter) offers interesting possibilities for rail travel in Scotland.

The reason for trekking this far south was to see the Class 139. The train runs on very poor jointed track, seemingly made much worse in recent times by the heavy demands of the Class 153 used until the 139 took over. Parry Associates have produced a useful leaflet (two sides of A4 folded to give 4pp) which is handed to passengers. I spoke to the 3 staff involved (all wearing LM ties, but Parry people) who were clearly dedicated to the idea. Passenger reactions were generally favourable, with the quality of the ride being the main grumble (which the leaflet addresses in detail). A 153 is more forgiving of lousy track geometry than a much lighter 139, so the increased bumpiness is not popular. The solution, of course, is for NR as a matter of urgency to use some second-hand WCML continuous welded rail (CWR) and re-rail the whole ¾ mile one weekend, and then noting that no further maintenance is likely to be needed for several decades.

I made the journey not wholly out of curiosity. It has seemed to me for some time that the provision of a better rail service in the Far North could be assisted by importing a Class 139 to operate beyond Georgemas Junction. The existing 139001 is, as far as Parry are concerned, a PPM20. This designation is useful because the "20" is the number of seats. Visiting the Parry website reveals that PPM40 and PPM80 also exist. There is also a bogie version under development, and this is surely the way forward for any journey much longer than the Stourbridge Shuttle (where a 4-wheel vehicle on CWR will be ideal).

At present on the FNL trains from the south stop at Georgemas Junction, reverse ends, go the 6¾ miles to Thurso, reverse ends, go the 6¾ miles back to Georgemas Junction and then a further 14¼ miles to Wick. Passengers for Wick thus travel an unwanted extra 13½ miles, which takes an extra 24 minutes. The same process occurs in reverse with UP services. I believe that a better service would be provided if a 139 of sufficient size and robustness were on station at Georgemas Junction to convey one of the trains to its destination, and to bring the return working to Georgemas Junction at the appropriate time. During the significant intervals when there is now no train north of Georgemas Junction the 139 would provide a shuttle service between Wick and Thurso, offering a competing service to the relatively slow stops-everywhere bus. There would be staff costs, but a light rail vehicle of this kind would have very small other costs. Taking 24 minutes off the Wick timetable would undoubtedly bring extra business to the railway. I'm aware that the difficulties are not insignificant, but I am convinced that without a fresh initiative like this the service on the FNL will be stuck at its present slow timings for at least the next 10 years - surely an unacceptable position.

One way or working would be that the 139 is drawn up at Georgemas Junction ahead of the incoming service, so that the latter reverses ends and goes only to Thurso, while the Wick passenger transfer along the same platform to the waiting 139. The other way, which puts the 139 on the shorter Thurso journey, would involve either the 139 waiting on the branch until the Wick section had gone, requiring passengers to wait for 3 minutes on the platform with only very limited shelter, or would require the Wick service to use the other platform, with Thurso passengers crossing the footbridge to the 139 waiting in the current platform. (There is no route from the second platform to the Thurso branch.) This alternative seems much less passenger-friendly and I would suggest that sending the 139 to Wick is the preferred solution (probably affecting fewer passengers). A PPM40 on a bogie would probably be ideal. To make this workable the whole of the line between Thurso and Wick would need to be relaid with CWR.