I visited Station Manager Michelle MacRae on 16 July while the new gateline was being installed. Here is a summary of the points we covered then.

Seven new staff are being recruited at Inverness (and eight at Perth) who will be responsible for manning the gates. There will always be two at any time and gates are expected to be manned throughout the day. These staff will be trained and gating is planned to be operational from late August. Michelle and her staff are aware of the likely tricky times and will use the six weeks before the gates are in use to observe and learn.

There are two suites of gates: one for P3 to P6 (3 normal and 3 wide gates) and one for P1 and P2 (3 normal and 2 wide). There is no access between these two gated areas. They are multi-directional and can be switched to accommodate varying traffic flows. P7 will not be gated (too difficult and very few trains use it). 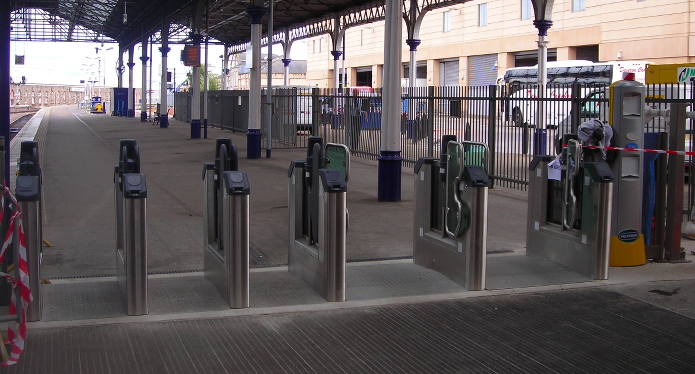 Moveable station furniture (i.e. everything apart from the centrally-mounted ticket machine) has been moved further away from the gate-line: the intention is to keep passengers as far from this as is reasonably possible. Trains will not be announced on the screen until they are ready for boarding. I asked what would happen if, for example, a Highland Main Line (HML) train were announced ready for boarding at P3 and a Far North Line (FNL)/Kyle train were not announced at P6. How would the gates know that a valid Perth ticket should open the gates but a valid Dingwall one should not? They wouldn't of course (my conclusion) but the plan is to have a flexible extending tape barrier (as now) separating the P3 area within the gates from the P6 area within the gates. I think this is unworkable in practice but First ScotRail (FSR) doesn't. The view is that passengers will not know where the FNL train will go from and will all wait patiently to be told that they may now board. For most of the year the passengers on those trains are seasoned, perhaps daily, users and know perfectly well what is happening. I think they will board with their valid tickets as they are accustomed to doing now, but FSR plan it otherwise. We shall see.

I raised the two contraflow times with which I am familiar (there may be others, of course): the incoming FNL at 10:35 and the HML connection at 10:45. Usually the HML is P4 so double use of the gates won't be needed, but if the FNL is late and the HML train is P1 or P2 there will be a need to exit and re-enter the gates. The other is the 17:54 FNL to which access is often quite delayed. I believe folk will seek to use the gates and get onto P5. I asked whether staff would - as they do now - require passengers to wait at the barrier. No, they want the area inside the gates to be as empty of people as possible - folk will enter and proceed to the platform. Again, we shall see.

The gates will be able to cope with all valid tickets, including flexipasses. There will be on-train ticket inspections exactly as now so the marking-off should not be affected. But as I understand it the requirement is that marking-off must be done before boarding the train, as some passengers will end their journeys - pretty well all flexipass holders are commuters, usually therefore making fairly short journeys - before their ticket is 15 inspected. A rich source of revenue loss, I'd have thought.

All gates will be locked open if there are no staff and all gates have an emergency switch (standard kit). Network Rail are doing the installation and they are satisfied (as is Transport Scotland) that the necessary safety implications have been complied with (and I have no reason to doubt this). When FSR first saw the plans an objection was raised about the sharply-projecting right angle in the new glass walls at the corner by Smiths. This was modified before installation and the angle has been removed allowing a wider passage at that pinch point. 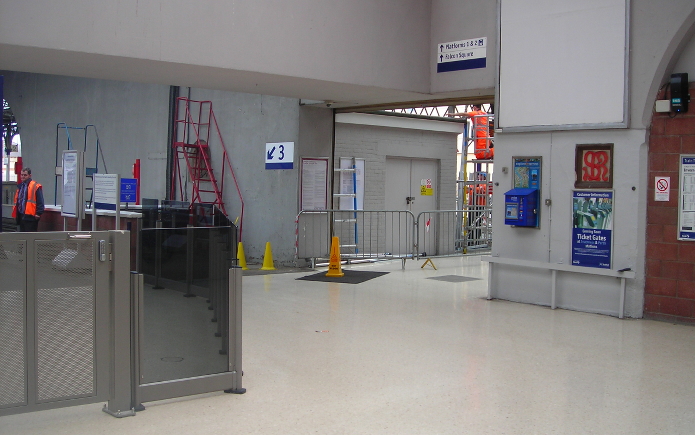 Smiths have been told not to encroach outwith the shop frontage.

The walkway through the station is acknowledged and will not be interfered with. However the double gate by P1 (to the access road) will be within the gated area and will be sealed out of use - not even the Sleeper will be accessible this way. (However access to The Royal Scotsman has been observed) The smaller gate will remain. Michelle pointed out that the practice of closing this gate in wet weather ceased some time ago when a safer matted footing was installed. (The reason for closure was to make it necessary for passengers to walk 50m or so on platform surface, drying their soles, before they reached the more slippery concourse.)

I think FSR are doing their best to comply with a daft franchise requirement over which the Inverness staff have no control (although, as indicated, they have had a degree of influence). I can see justification for gate-lines at places like Waverley, but gating Inverness and Perth looks awfully like box-ticking, especially when one considers that no fewer than fifteen extra staff will have to be paid for.

When I used the station on Tuesday 16 September arriving off the Sleeper on P1 there was one staff member on duty at that suite of gates. One of the wider gates was locked open while he examined tickets. When I walked straight through (as you do when the gate is locked open) I was called back to show my ticket. They haven't yet worked out the system. At the other suite of gates a 170 had arrived (probably from Aberdeen) with large numbers of passengers being herded through just 2 wide gates, leaving 4 gates for passengers entering, of whom there was the merest trickle. Again the steepness of the learning curve was demonstrated. Perhaps it's unfair to cavil after only a few weeks, but if clearly inappropriate use of the system like this continues we will have good grounds for serious complaint. Anyone who uses the station should spend a minute or two observing, and should let FoFNL know if things should be better handled. 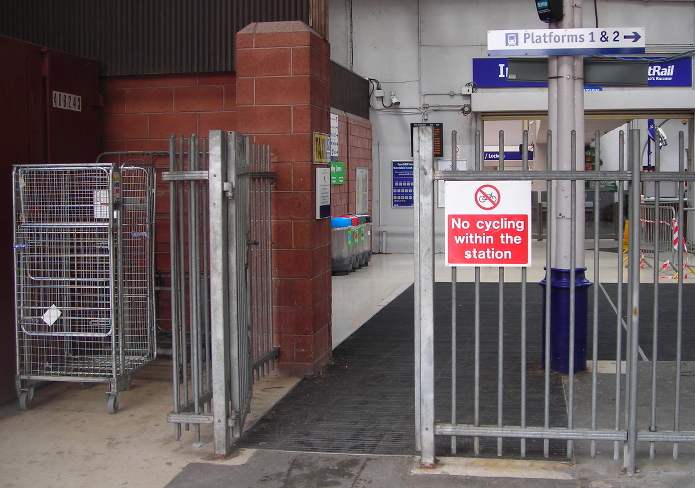 Richard Ardern comments that he observed on a recent occasion that it took more than five minutes for most of 100 passengers from a north service to pass through the barriers, the others went for a south train on platform four. Also the memorial bench for Frank Spaven, past FoFNL Membership Secretary and Vice President has now been marooned by the new barriers.