This took place on the 1st of April 1960, back in the days when steam reigned supreme on the Far North Line! It was one way only - Thurso to Inverness - since I had travelled north the previous day by road. My father's job took him all over Scotland, so as a family we often accompanied him at holiday time. This was a university vacation, and I guessed that a trip on the "Thirty-Nine Stops" would be a pleasant antidote to the onset of Finals.

Fortunately I kept a record of what was seen en-route, so for the possible interest of those who remember the wonderful fleet of locomotives that operated north of Inverness, here are the details.

My adventure began at 8:35am at Thurso, arriving exactly six hours later at Inverness. This was followed by three happy hours trainwatching at lnverness to allow the road party to catch up.

The 8:35 from Thurso consisted of two very well-filled coaches (all six seats in my compartment were occupied), hauled by a Stanier 2-6-2T 40150, sporting a small snow plough. This took us in a leisurely fashion as far as Georgemas Junction.

At Georgemas we waited for the arrival of the Wick portion (8:40am from Wick) with Stanier "Black Five" 45479 in charge. This train also had two coaches, but with the addition of a bogie parcels van of pre-war origin, teak bodied and built by Gresley for the LNER. This is evident in the photograph I took from the Georgemas station footbridge, having nipped out to record the scene. The fellow passengers in the Thurso portion apparently got really concerned when the train began to move, but I was safely in the Wick portion by then!

The Thurso portion had been attached to the back of the train and we were off into that wonderful empty landscape of Scotscalder, Altnabreac and Forsinard, with its vistas of distant mountains to the South. And so down the strath below Kinbrace, with a sudden stop to pick up a passenger at Borrobol Platform - a gentleman wearing a kilt. But the other request stop in those parts, Salzcraggie Platform, was passed at speed.

In those days there were just two daily passenger services from lnverness to Wick and Thurso, although a third went as far as Helmsdale. It was here that our train met the first northbound one, the 6:40am from Inverness, which was in the care of another "Black Five" 44785. Both engines took water, which gave me plenty of time to cross the footbridge and get another photograph.

I must just mention in passing that the previous day I had visited Helmsdale station while my father visited the local Postmaster (his job was with the Post Office or the GPO as we all called it). In the station, gently punctuating the still atmosphere with its Westinghouse Pump, was a Pickersgill 4-4-0 of the old Caledonian Railway, 54495. It had a short goods train containing what looked like a couple of gas cylinders. I took a photograph, and had the honour of being invited onto the footplate by the crew. The driver was a Mr. Sutherland. 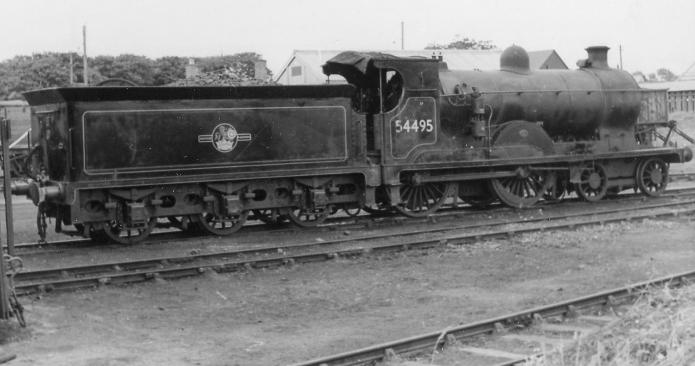 Inverness based Pickersgill 4-4-0 no 54495 on shed at Wick in September 1961.
Photo: © David Stewart (with permission via Railscot website)

Back to the journey south! The next crossing place was, as it still is, at Brora, and here we met two northbound freight trains, both tucked neatly into the loop with the second engine buffer to buffer with the guard's van of the first train. Once again Stanier "Black Fives" had charge of both, their numbers being 44799 and 44788 respectively.

In 1960 Dunrobin Platform was included in the timetable, but described as Dunrobin (Private) and designated a request stop. Then, after Golspie came The Mound Junction where the Dornoch engine, Great Western pannier tank 1646, had left its single coach in the branch platform and was waiting to add a Restaurant Car to the back of our train. This had come north on the 6:40am from Inverness, serving breakfasts, and would now return serving lunch. 23 About six minutes were allowed for the Restaurant Car to be attached.

Here I must digress again, because on the road journey the previous day it just so happened that the car was passing Cambusavie Platform a few minutes before the arrival of the 1:00pm from Dornoch, and it was agreed that I could take the train the short distance over the causeway to the junction. It was quite difficult getting onto the platform, weeds having grown up around the gate, but what a sight for sore eyes - the guard opening and closing the gates over the minor road leading to Skelbo, and the panting little "invader" from Croes Newydd shed drawing its coach into the station. The guard gave me a great welcome, there being nobody else on the train, and wrote out a ticket for 7d which I still have as a memento.

To return to the journey south! The next recorded entry in my notes is a slight mystery. At Edderton we should have passed the second northbound train (and the last to Wick and Thurso), the 10:40am from Inverness. However I have no record of seeing it, and the only train mentioned is a southbound freight in the care of 45461. Perhaps the 10:40 was running late and met us at Tain - but again no mention.

Caledonian 4-4-0 54480 was on shed at Tain, and would later haul the 3:50pm local to lnverness, due there at 5:40pm. And thereafter, on this southbound journey, the old Caledonian Railway's engines held sway. At Evanton 54488 was waiting with a northbound freight, tank engine 55199 was shunting around the yard at Dingwall, immaculate as ever, and at Inverness 54493 was on the two coach 3:10pm local to Tain. Incidentally, it was this latter engine that first brought a Caledonian flavour to Stranraer, in about 1930.

Thus ended my first Far North journey, but the only one in the steam era. The next was to Wick and back in 1987, when Class 37 diesel 37419 broke down rather inconveniently at Forsinard on the return journey.

A final footnote: it was interesting to see the photograph of the small Standard 2 78052 in Issue 62 of Far North Express shown again below. At that time only one of the Great Western engines had arrived in the North - 1646. So perhaps it was out of action needing some attention, with the Standard drafted in to fill the gap. 1649 followed in July 1958. It is a pity we lack the Dornoch branch today, but at least we have the Far North line, and long may it flourish! 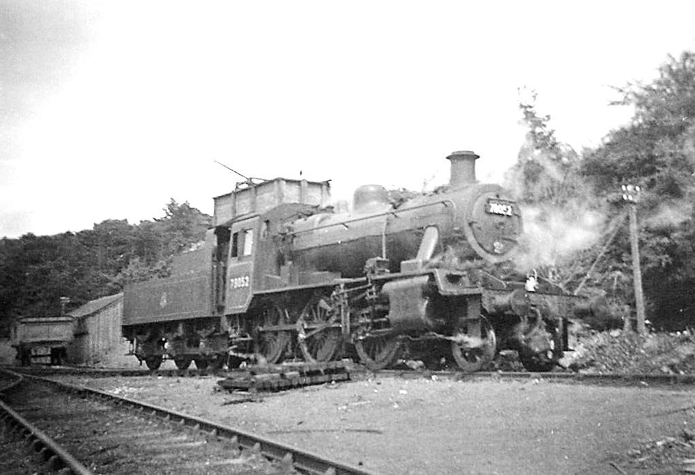 In July, 1957, Sandy Colley was quite surprised to find British Railways 2-6-0 78052 at Dornoch rather than one of the two Great Western pannier tanks which had recently been drafted to the branch following the withdrawal of the Highland Railway locomotives that had worked there for many years. 78052 must have had special permission as it would normally have been considered too heavy. It certainly didn't fit into the engine shed at Dornoch, luckily for both Sandy and us.
Photo: Sandy Colley