Since the end of October FoFNL Secretary, Malcolm Wood, has been compiling weekly figures for late-running and cancellation on the FNL. These statistics are proving invaluable as they are far more illuminating than the official figures which ScotRail has to publish. The official figures run on a rolling 12-month aggregation which carries a built-in time lag and doesn't show the extremes which actually take place from week to week. Malcolm's summary allows short-term changes and trends to be easily seen. These are more relevant to passengers: imagine a year with a theoretical 100% on-time record for 50 weeks and only 10% on-time arrivals for the other 2 weeks. Whilst showing a very satisfactory 96.5% on time for the year, the official figure would mask the horrendous weeks when people would have been late for work, or missed important connections. 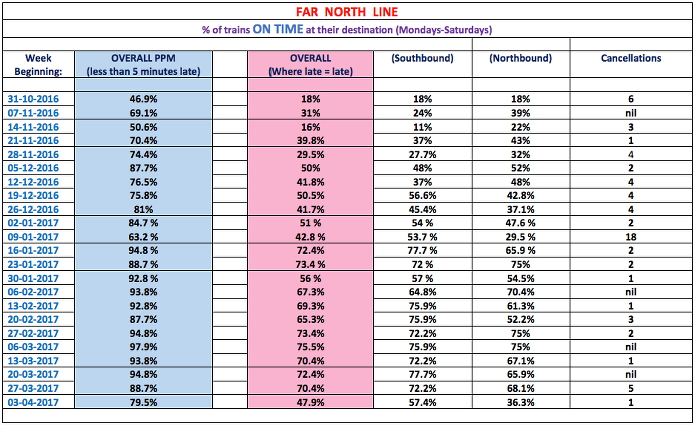 Malcolm's weekly figures, including this summary, are much easier to read on the FoFNL website where they are also constantly updated.