This started as a gleam in the eye of James Stockan of Orkney, Chairman of HITRANS, and has now reached the stage of a consultation being awarded. Its report is expected in the summer. If serious money is being spent in this way then clearly any objections from the operator (Serco, trading as Caledonian Sleepers (CS)) did not happen. The new Mk 5 Sleeper coaches are under construction in Spain, and when they are in service all the existing Mk 3 sleeper and Mk 2 lounge coaches will no longer be needed. It is these which would be used for the Caithness service. While the consultants are about their business some of the details are likely to change, but the preliminary plan is to run a service from Thurso to Edinburgh (possibly to Glasgow) on alternate nights with the return working on the other nights. A service on Saturday night would not run as this would interfere with possible weekend maintenance (this is why no Sleeper runs now on a Saturday night, popular though it would undoubtedly be). The route would be via Aberdeen - much longer, but speed and journey times are not important overnight. The services would be timed, where possible, to connect with the Orkney ferry at Scrabster.

Peter Strachan, MD of CS, is open to the idea of running services outwith the contracted ones in the franchise. Oban has been mentioned. Splitting and joining at Crianlarich would seem the obvious way on paper, but the existing Highland Sleeper, serving Aberdeen, Inverness and Fort William, and splitting/joining at Waverley is already the longest train in Britain, and so any Oban vehicles wouldn't fit into Euston. One for the diagrammers to solve! 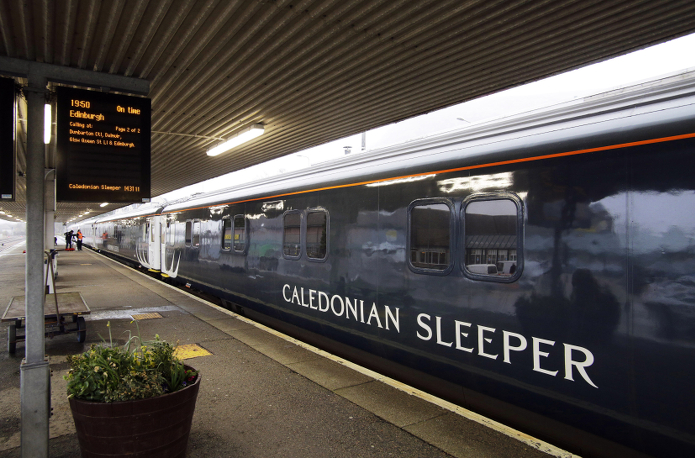