A notice appeared on the public contracts website from Abellio ScotRail Ltd on 2 August. This sought a partner to tender for the Redevelopment of Inverness Raulway (sic) Station. The brief is to involve "Taking existing GRIP 3 design proposals as Lead design to GRIP 5 including: a new station front elevation, new access and egress layouts to other station entry points, internal refurbishment, external refurbishment and streetscape improvements".

Invitations to tender are expected to be sent out on 7 September with the contract to be awarded around 26 September.

The project is a big one costing several million pounds to improve the concourse, all three entrances to the station including Station Square with possibly expanded retail opportunities. Details are sketchy at present, but more detail is promised for the end of the year when the public will hopefully be consulted. It is so important to get it right. 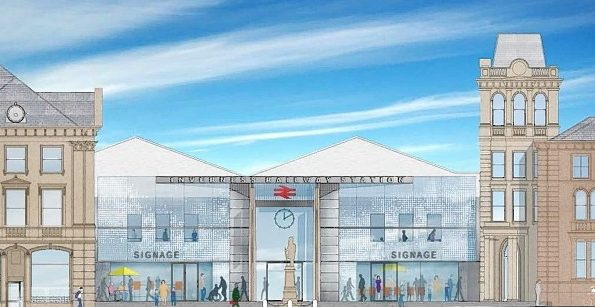 Artist's impression of the plans for the station

Ideally, the station needs more space all round. The ticket barriers have led to overcrowding of the concourse at times, Safe access by pedestrians, cyclists, and by taxi, bus and car passengers is poor. The north platforms are hampered by being seriously curved and rather short.

It is worrying to hear some local politicians favouring removing the taxis from Station Square and Academy Street and putting them at the Debenham's side of the site. This roadway is already seriously inadequate for the replacement buses which cannot turn and for all the cars and minibuses which legitimately bring and collect rail passengers. Where will the taxis go and how will safe passenger access to both side entrances be secured?

Is more retail space required? It is already strange that the WH Smith bookstall has changed into more of a coffee shop than a bookstall in competition with the existing "Cafexpress" cafeteria. How does this affect the viability of the on-train catering?

Maybe there is scope for expansion in the direction of the bus station, building a shared airport style warm waiting room and ticket desks and relocating the tourist information office on to the site. That would create a convenient transport "hub" for the main interchange of the Highlands. Safe and easy access for all is crucial to this project.

Watch the media for the proposals and your chance to comment.