To ask the Scottish Government whether it will review the Scottish transport appraisal guidance (STAG) process in light of the claim in issue 68 of the Far North Express of it being biased against small rural schemes.

Humza Yousaf: Scottish transport appraisal guidance is routinely reviewed and developed in line with best practice and emerging relevant research evidence. There is no evidence that the guidance is biased against small rural schemes and it is important that all proposals have a demonstrable business case before Scottish Government investment is made.

To ask the Scottish Government, in light of the greater number of passengers than anticipated on the Borders Railway line, what Transport Scotland is doing to adjust its passenger forecasting formula.

Humza Yousaf: There will always be an element of uncertainty present with forecasting, particularly considering the unique nature of the borders railway, which is the longest stretch of new railway line to be built in the UK in the last 100 years.

To ask the Scottish Government what the (a) most recent and (b) forecast passenger numbers are on the Borders Railway at (i) Edinburgh Waverley, (ii) Newcraighall, (iii) Shawfair, (iv) Eskbank, (v) Newtongrange, (vi) Gorebridge, (vii) Stow, (viii) Galashiels and (ix) Tweedbank station.

Humza Yousaf: The most recent and forecast passenger numbers by station for the first six months of operation on borders railway are as follows:

Capacity on the Highland Main Line North of Perth

That the Parliament shares the concern of the Chartered Institute of Logistics and Transport that there appears to be little or no intention to increase the capacity on the Highland Main Line north of Perth; believes that the modest investment for faster entry and exit from passing loops is welcome but insufficient to lift capacity, and calls on the Scottish Government to make the dualling of the Highland Main Line north of Perth a priority to promote modal shift of goods, which, it understands, produces 87% less CO2 emissions than the equivalent road journey, and people from road to rail.

To ask the Scottish Government how many times in each of the past 12 months services on the Far North Line have not stopped at (a) Beauly and (b) Conon Bridge station because they were subject to delay, broken down by the reason for the delay.

Humza Yousaf: In each of the past 12 months services on the Far North Line have not stopped at (a) Beauly and (b) Conon Bridge station, because they were subject to delay, for the following reasons: 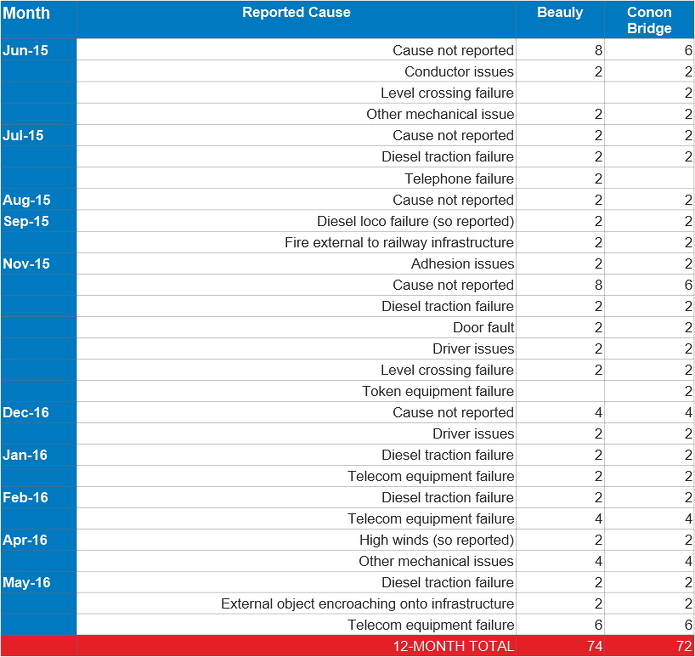 Mike Lunan, FoFNL Convener: Whichever way you read this it's a pretty shocking indictment of a system when so many different things go wrong, and so many of the same things keep on going wrong.

To ask the Scottish Government what discussions it has had with Network Rail regarding the reason for the potential benefits of a loop at Kinbrace not being mentioned in the Scotland Route Study.

Humza Yousaf: Network Rail have closed their consultation on the Scotland Route Study, and are expected to publish their final version in July. The Scottish Government has not had any specific discussions with Network Rail regarding the inclusion or otherwise of a loop at Kinbrace. If Kinbrace is identified as requiring a loop in the future, and has a sufficient business case, the fact that there is no specific reference in the Scotland Route Study does not preclude it being considered as part of any future investment programme.

To ask the Scottish Government what the implication for timber extraction in the area might be of not having a railway loop at Kinbrace.

Humza Yousaf: The Scottish Government is aware of the Branchliner project led by The Highlands and Islands Transport Partnership regarding timber extraction in the area around Kinbrace and the options detailed in its recent report which include the passive provision of a future loop at Kinbrace. This work is subject to a number of factors such as detailed appraisal, agreement from all parties, proven early stage viability and funding.

To ask the Scottish Government whether it will press Network Rail to place a dummy entry loop at Kinbrace in the software rewrite for the current radio electronic token block (RETB) signalling renewal.

Humza Yousaf: Transport Scotland is supportive of the on-going collaborative working involving the private sector, rail industry and local authorities in exploring the feasibility of establishing a rail freight facility at Kinbrace to transport timber from Sutherland to its onward markets.

If a business case and funding is identified Network Rail will work with the scheme promoters to find the most cost effective and safe option to deliver this facility. Network Rail have advised that a dummy entry loop is not part of the design, nor is one likely to be required, for any potential rail freight facility to operate effectively at this location.