Railfuture is the UK's leading independent organisation campaigning for better rail services for passengers and freight, with branches in Scotland, Wales and England. It is a voluntary group representing rail users, with 20,000 affiliated and individual members. It holds two conferences each year as well as its AGM. At the annual autumn conference awards are given in several categories for the varied work done by rail user groups. In 2017 Far North Express was entered in the Best Newsletter category. We are delighted that at the conference in Leicester on November 4th it was announced that FNE, and the newsletter of the Tarka Rail Association in Devon, were given the Gold Award in this category. 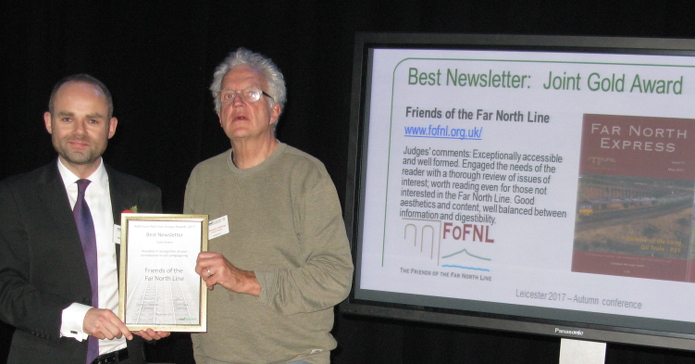 The award was presented by Railfuture's Honorary President, the transport writer and broadcaster Christian Wolmar (above right). Gavin Sinclair, a former FoFNL secretary, originally from Watten, between Thurso and Wick, kindly accepted the award on FoFNL's behalf.

On the display were the judges' comments:

Exceptionally accessible and well formed. Engaged the needs of the reader with a thorough review of issues of interest; worth reading even for those not interested in the Far North Line. Good aesthetics and content, well balanced between information and digestibility. 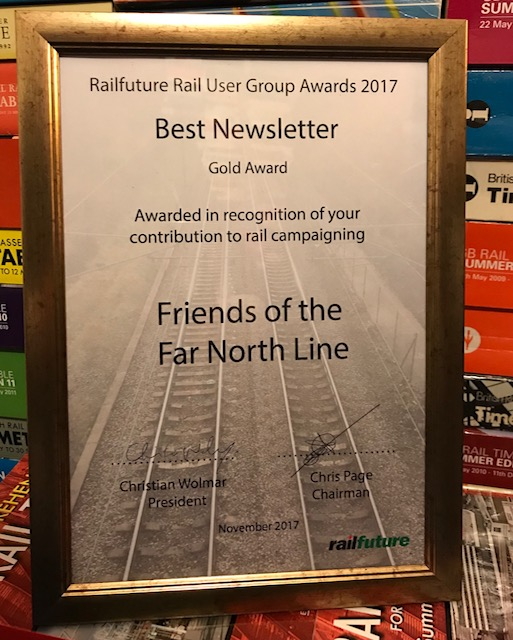 We try hard to make Far North Express a good mix of opinion, news and interesting articles. Rhoda Grant, one of our Vice-Presidents, kindly tabled a motion in Holyrood:

That the Parliament congratulates the campaign group, Friends of the Far North Line, and the editor of its newsletter, Ian Budd, on recently winning the Best Newsletter Gold Award; notes that the award was presented by Railfuture, the UK's leading independent organisation campaigning for better rail services for passengers and freight; further notes that it was presented by Christian Wolmar, railway journalist and President of Railfuture, and praises all members of Friends of the Far North Line for keeping up the pressure to bring improvements in infrastructure, journey time and services on the railway lines connecting through Inverness.