A Railman Remembers, 6 - Shunting With Care
Continuing our series of articles by Mark Nolan, telling the story of his early days as a railwayman at Fearn Station on the Far North Line in the 1970s.

Despite my frankly lackadaisical attitude towards my railway business, I was always diligent with the parcels. After all, they had 'stuff' in them, and believe me, although food was relatively cheap, stuff wasn't. A pint of milk was 5p, and even more astonishing, it was the same price wherever you bought it. On the other hand, non essential consumer goods in the 70s were eye-wateringly expensive, not particularly well put together, and inclined to break if you looked at them the wrong way.

After being allowed to get a bit wet on the platform, the parcels which the early train dropped off every morning were loaded on to a high wooden barrow which was slightly too large to wheel into the booking hall. One of my responsibilities was to document them, so all the information which was already on the parcels was faithfully duplicated onto a sheet. The parcels were mostly catalogue purchases from firms like Kay's, Grattan, Littlewoods and Great Universal Stores. I piled them up in different parts of the cage, depending on where they were going.

A militant delivery driver would turn up from the Invergordon goods depot once a week. The usual vehicle was a yellow NCL van or sometimes an articulated lorry which was far too big for the job. As the parcels usually spent a few days sitting around at the station, those in the know would get them much quicker if they dropped in and collected them.

One day a friend turned up in a decrepit ex-Post Office van. "What are you doing here?" I asked in surprise. "The deliveries have been put out to tender" he replied. "I'm the new delivery driver." "You're kidding!" "I'm not, and you're going to have to give me a hand. I haven't got a clue where any of these places are."

"I can't do that, I need to be here for the trains" I replied. "That's ok, we'll pop back in time for the next train and go out again" he said. I have to admit that after several months in the station, the idea of escaping to deliver the parcels was rather attractive.

So it was an executive decision, taken without consulting the Area Manager, that in the interest of getting the parcels to their correct destination, the station would be closed between trains on delivery days. It was great fun zig-zagging across the Fearn peninsula, visiting all the farms, cottages and businesses around Balintore, Nigg and Portmahomack, and actually meeting the locals. We nearly always made it back in time for the train, and as far as I know, no-one ever noticed when the station was closed.

By current standards, there were a lot of problems with gung ho arrangements like this. Would I have been insured in the event of an accident? Did the delivery van even have insurance? Or an MOT? But it was the seventies. For better or worse, it was a much simpler time. My caravan would never be allowed anywhere near railway property today, let alone on the platform. As for unofficially living in the station, no chance.

There were lots of other health and safety issues which weren't issues then. I was running an extension cable out of the station window to the caravan for power; I allowed the public to wait in the ticket office; a four year old girl who lived in the cottage next door used to come and visit when she was bored; it was a bit like a scene from the railway children, except that Perks was a hippy. 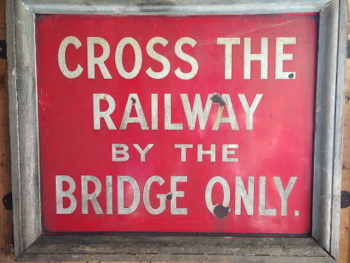 Another thing I used to do was wander around on the track, just because I could. I mean, I knew the timetable, and I could hear any approaching train, right? Wrong. One day I had literally just stepped back on to the low platform when whoosh, out of nowhere a southbound light engine came tanking under the road bridge and through the station. They didn't even have time to whistle at me. Needless to say it was a crucial lesson which I was lucky to survive. That was when I realised that, against all logic, trains really could be silent, unexpected and deadly. From then on I had much more respect for the rules of the railway.

Dick the clerk who had trained me up on the office side of things quite liked getting involved in hands on activities given the opportunity. Maybe it was an antidote to all that paperwork. One day he announced that we should re-arrange some of the wagons "to save the goods train a bit of time". My impression of the goods trains was that they were a law unto themselves. Any hint of a problem and your wagons didn't get collected, a bit like not getting your wheelie bin emptied if it has the wrong sort of rubbish. This could be awkward with a perishable cargo of valuable seed potatoes.

Just in case you ever need to move a railway wagon without an engine, this is how it's done. All you need is a metal bar with a bent tip which has been hammered flat. To get the wagon moving, you let the brake off and lever the pinch bar between the wheel and the rail. It's surprisingly easy to make a few tons of vehicle move; there's virtually no friction when you have steel wheels on steel rails, which is what makes trains so special. My job was to run alongside and reapply the brake before it rolled out of the siding or crashed into the next wagon. Look Ma, no training, no steel toecaps, no high viz.

Another time Dick brought in a ladder and tools so we could remove the enamel signs from the footbridge. The second platform had been decommissioned by the simple expedient of removing the iron steps from the bridge, so the signs telling you to 'Cross the railway by the bridge only' were redundant as well as misleading. I wanted one as a souvenir. We manhandled the heavy signs down without a problem, but it was still a bit hairy getting up there.

Dick used to bring in internal memos and point out vacancies on other parts of the network. To his mind I was well placed to progress within the railway, and he was right. But having stumbled into the job by accident, I was never planning to stay and make a career of it; I had dreams of playing music full time, and not as the singing station master. With hindsight, I might have enjoyed staying with the railways, but at the time, I thought I was doing well to be heading for a year in the job.

Another thing Dick pointed out was that I was getting behind on a task which I was supposed to be completing during the quiet summer months. This involved cutting up rolls of brown paper and tying them in bundles in preparation for the busy autumn potato traffic. But somehow there was always something more interesting to distract me.