Inverness: 'Somewhere in the South'

The Railway Magazine's series 'Practice & Performance' has been running since 1901.

We have been given permission, by FoFNL member Keith Farr, to serialise this article, which recalls several historic runs over the FNL.

In September 1954 it was Noel Proudlock, now a prominent member of the Railway Performance Society, who ventured north, using the 10.40am Inverness-Wick 'Mail'. Departure was delayed 55 minutes awaiting the 6.47am from Perth, which would have connected out of the 'West Coast Postal' from Euston and, indirectly, a host of places in the south of England and Wales. The ex-Highland Railway Travelling Post Office van from Perth would have been taken as far as Dingwall by the 10.30 Inverness-Kyle of Lochalsh, to be detached there for partial unloading before transfer to the Far North train. With just six vehicles, 'Black Five' No. 44724 naturally made snappy running between stops, and every effort was made to regain time. Thus the Class 5 sprinted up to 60mph between Evanton and Alness, just 3.6 miles apart and with a slow conclusion because of adverse signals.

On single track, it is especially difficult to regain time because the pattern of trains crossing at passing loops goes haywire; thus, at Kildary, the 'Mail' was detained 12¾min, instead of the booked one minute, awaiting the 8.35am Wick-Inverness behind No. 45360. Normally, the crossing would have taken place at Edderton, 12.9 miles farther on. On the other hand, they had passed the 12.05pm Tain-Inverness, hauled by 'Caley Bogie' No. 54470, at Alness instead of Fearn with only 2½ minutes' loss.

Further delay could be caused by unloading mails at stations, so it was up to the loco and its crew to win back minutes as best they could. Leaving Invershin, up 1-in-72 from a standing start, the 'Black Five's exhaust beats reverberated thunderously in the rock cuttings as it fought up to 40mph, increasing to 54 on the undulations towards Lairg. The 5½ miles of hard slogging from Invershin were thus devoured in 9½min, 4½ less than booked, Noel Proudlock observing that the loco was "beautifully noisy", assessing the maximum equivalent drawbar horsepower at about 1,100. After mails had been unloaded to be taken by postbus to the far North West, the 'Black Five' resumed its climb to Lairg summit with gusto, attaining 41mph up 1-in-70 before descending to Rogart at a maximum of 63mph. At The Mound, a Drummond 0-4-4T would have been waiting with the last train of the day to Dornoch (the 2.05pm!), while the 'Mail' continued to Golspie and the short 1-in-60 climb to Dunrobin Halt.

More time was regained alongside the Moray Firth to Helmsdale, where the restaurant car and the TPO vehicle were detached, so it was with just two coaches and a van that No. 44724 tackled the successive gradients up to the County March. The Kildonan call lasted just 25 seconds, while schoolchildren clambered aboard for the short journey to Borrobol Halt where, to quote the working timetable, the 10.40 Inverness called "when required SX to set down School Children from Kildonan". 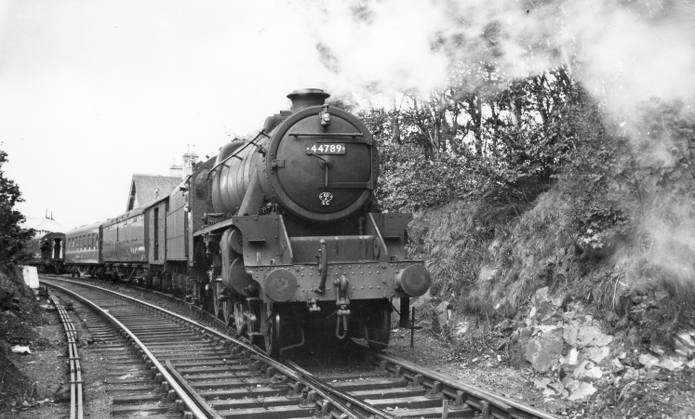 Black Five 44789 adding the restaurant car to the up train at Helmsdale. (HRS collection)

Past wind-ruffled Loch an Ruathair, the vestigial train took County March summit at 38mph; but signals 'on' at the approach to Altnabreac presaged a long wait to cross the 3.40pm from Wick, behind Inverness-based No. 44722. So the 47min late arrival became a 55½min deficit on departure. Had the 'Mail' been on time, the 'meet' would have occurred at Georgemas Junction.

At Scotscalder, in contrast, the request stop lasted all of 20 seconds; smart work at Georgemas cut the time there from eight to less than six minutes; and the request stop at Bilbster was not made. To Wick the 'Mail' had recovered just over 2½ minutes all told; but the total gain in running time was 18min, partly offset by station overtime unloading mails, crossing southbound workings at the 'wrong' places and making nearly all the 'conditional' stops.