Inverness: 'Somewhere in the South'

The Railway Magazine's series 'Practice & Performance' has been running since 1901. We have been given permission to serialise this article by FoFNL member Keith Farr, which recalls several historic runs over the FNL. Part 1 (of three) discusses a 1954 run logged by E R Davies.

Reminiscing about the Highland Railway in 1957, historian C Hamilton Ellis observed that, by the time the weary traveller reached Caithness, 'Inverness seemed...remote, somewhere in the South'. For Inverness to Wick was a 161½-mile trek, almost double the distance as the eagle flies.

The firths of Beauly, Cromarty and Dornoch, and the rocky Ord of Caithness, forced the promoters of the line to make long detours inland. And, until the purge of June 1960, when many of the smaller stations were closed to passengers, the six-hour journey prompted the soubriquet 'line of the 39 stops'.

Yet the locomotive work was far from lethargic, for this was not some straggling Great Western byway with pedestrian schedules and bucolic station work: it was a main line, essential in peace and invaluable in war (see The Railway Magazine, December 2014).

From 1935 to 1961, Stanier 'Black Fives', vigorously driven singly or in pairs, handled trains of substantial length, although they tended to shed vehicles as the journey progressed.

This is a journey recorded by E R Davies in 1954 behind a single Black Five hauling 415 tons gross out of Inverness. On time, No. 44799 eased its heterogeneous caravan away from the west-facing 'prong' of the terminus and traversed the ill-fated Ness viaduct before slowing almost to walking pace over the Caledonian Canal swingbridge at Clachnaharry. The next six miles to Clunes comprised the only double track section beyond Inverness and, after tackling the short 1-in-100 to Bunchrew at 32mph, the big train was rolling at 50 before the first stop, at Beauly, where adverse signals contributed to a three-minute late arrival. Despite hard running, a few seconds were then lost on the station-to-station sprints on to Dingwall, where the Kyle of Lochalsh line diverges to the West. 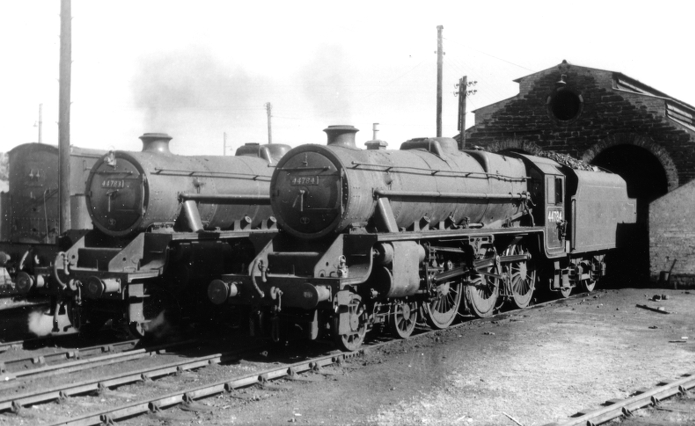 Despite the low-lying terrain alongside the Beauly, Cromarty and Dornoch firths, the line undulates to Bonar Bridge, where the Dornoch Firth narrows into the Kyle of Sutherland. Bonar Bridge (now Ardgay) marks the transition from the former Inverness and Aberdeen Junction Railway to Sutherland Railway territory. This company planned to reach Brora but ran out of money at Golspie, where the third Duke of Sutherland came to the rescue by promoting his own railway along the coast to Gartymore, just short of Helmsdale. The final link, via an inland deviation across the moors of the Flow Country to Wick and Thurso, was completed by the Sutherland & Caithness company in 1874, the whole becoming part of the Highland Railway.

Reverting to Mr Davies's journey, it was probably curvature that prevented No. 44799 from exceeding 54mph alongside the Dornoch Firth from Tain to Bonar Bridge, from where the Class 5 was assisted by Pickersgill 4-4-0 No. 54495. The pair lost nearly a minute on the tight 5½min booking for the 3.1 miles on to Culrain, where trains cross the viaduct over the river Oykel and enter Sutherland at Invershin. The half-mile from Culrain to Invershin was apparently the shortest distance in the UK that one could travel in a restaurant car, although anyone finishing a meal in the available two-minutes would surely be in the Guinness Book of Records!

The line changes as it embarks on the first of its two major incursions away from the Coast, and Eric Davies would have relished the music of the 'Caley Bogie' and the Black Five as they fought the winding 1-in-72 that lifts the train high above the River Shin to open moorland and easier grades; here speed rose to 44mph, helping to cut the Invershin-Lairg booking by almost two minutes.

Beyond Lairg, the two locos, so different in vintage and character, romped over the 488ft summit before bearing east-south-east down Strath Fleet at up to 56mph. Following brief calls at Rogart and The Mound, junction for the Dornoch branch, the train was again following the coast, snatching seconds from the schedule. After Golspie and the short but awkward climb at 1-in-60 to skirt Dunrobin Castle, the 'double-header' descended to Brora, with its coal mine, and continued alongside deserted beaches, with cormorants on wave-lashed rock outcrops hanging out their wings to dry. A sharp turn left brought them into Helmsdale all but two minutes early.

Here, passengers lost their restaurant car and the Black Five its pilot, leaving the 4-6-0 with 365 tons in tow to tackle the many miles of broken 1-in-60 to the Sutherland/ Caithness County March summit. The maximum permitted tare load for a Class 5 north of Invershin was 300 tons, which was presumably why the 4-4-0 assisted from Bonar Bridge, two stops earlier. From Helmsdale, No. 44799 had 54 tons above that limit but headed gamely up Strath Ullie to Kildonan, where gold was once panned for, and where they were held seven minutes to cross the 9.45 from Wick. The ensuing 1-in-60 was tackled at 22mph and, after a brief 48 in the dip at Borrobol, another mile of the same grade before Kinbrace was mounted at an energetic 33mph.

Entering the 'Flow Country', a name derived from the Old Norse floi ('marshy place'), the Class 5 fell only to 32mph on the 1-in-60 towards Forsinard, an oasis partly sheltered by a few wind-beaten trees. 'Forsinard', incidentally, comes from 'foss' (Norse for 'waterfall'), and 'ard', Gaelic for 'high place'.

Swinging east across the moorland, the 4-6-0 mounted the 708ft County March summit at 32mph, on 1-in-60 easing to 1-in-140/80. Then, on the long descent, the featureless moorland metamorphosed into the fertile Caithness Plain, below Scotscalder farmsteads appeared and they passed the clutch of houses comprising Halkirk to arrive at Georgemas Junction just 1¼min late.

Nowadays there is a quick reversal here before the 158 unit heads for Thurso but, in 1954, the train would have been divided with much drawing up and shunting. Ex-Caledonian 4-4-0 No. 54491 added a variety of wagons to the two through coaches and van and it was as a mixed train that this vestige of the 6.40 from Inverness ambled alongside the River Thurso to Britain's most northerly station.