When the Scottish Parliament unanimously backed the Climate Change Act in 2009, much was made of this being the most ambitious climate change legislation anywhere in the world. In the intervening years, good progress on emissions has been made in a number of sectors - but the glaring exception has been transport. As noted by Transform Scotland, "there remains no systematic programme of action to make cuts in transport emissions on the necessary scale, with emission levels remaining as high as they were 25 years ago".

The Scottish Government's Climate Change Plan makes many mentions of transport, but surprisingly little of the enormous potential role of rail freight - just two references in 178 pages. Yet by the Government's own admission, "per tonne of freight, rail freight produces 76% less CO2 than road freight". And gearing up to shift more freight from road to rail has plenty of synergies with action to encourage more passenger traffic by train.

A key example is electrification. While the Climate Change Plan commits to moving from 26% of the network being electric today to 35% by 2032, there are no detailed funding plans for electrification works beyond the current Edinburgh-Glasgow investment. In contrast, the Scottish Government has in place expensive funding commitments which will significantly increase carbon emissions - notably its £9 billion road-building programme and the proposal for an annual £300m Air Passenger Duty tax cut for the most polluting form of transport. It is surely incumbent on the Government to provide suitable mitigation to at least balance this likely increase in emissions - and shifting freight from road to rail is a clear, early-achievable intervention which will do just that.

As the Scottish Government's 2016 Rail Freight Strategy document acknowledged, rail is most competitive with road where it operates "longer, faster, greener freight trains". On Anglo-Scottish routes, this means investment to provide overtaking loops which can accommodate 775m length trains - the maximum which can pass through the Channel Tunnel, and the equivalent of more than 40 lorry loads in a single movement.

But rail freight cannot prosper simply by concentrating on the East Coast and West Coast Main Lines. Feeder routes within Scotland are crucial to existing and potential traffics, ensuring that the train can get as close as possible to the origin and destination of the traffic it carries.

RFG and Transform have long highlighted the contrast between the upgrading of road and rail between Perth and Inverness. But another good example concerns Britain's only aluminium smelter, at Fort William - this has its own rail sidings, receiving the alumina raw material by train. The finished product formerly moved by rail, but infrastructure constraints along the single-track West Highland Line - weight restrictions on bridges, and short crossing loops - led to the traffic being lost to road some years ago.

The need for a 'cross-modal' approach

Now that the Fort William smelter has been taken over by the Liberty group, the anticipated growth and diversification of production provides an opportunity to re-examine rail potential, with industry and government working in partnership to reduce transport costs and keep heavy traffic off the unsuitable A82.

There are multiple other examples across the country where rail could be helping the Scottish Government to reach its climate change targets. Concerns have rightly been voiced about the dangers posed by whisky lorries on the A95 road linking Speyside with the A9 - but why are all the suggested solutions based on road investment? Mothballed railheads at Elgin and Keith are ideally placed to act as hubs for rail movement of bulk spirit to maturation plants in Central Scotland, with trains carrying other food and drink produce from the North East to export markets. This has already been the subject of a successful trial. The Scottish Government, whisky firms and the rail industry need to work together to secure the commitment and investment which will enable trains to ease pressure on the A95 and A9, and the communities along these roads - and in so doing also help act on climate change.

This need for a 'cross-modal' approach to transport investment applies across Scotland - and only the Scottish Government can pull the appropriate strategic levers. Some very welcome encouragement came in the recent 'Scottish Ministers' High Level Output Specification for Control Period 6' which requires Network Rail to "clearly demonstrate throughout CP6 [2019-2024] that it is using all levers at its disposal to make the use of rail freight attractive to business across Scotland, including simplicity of processes and a flexible approach to accommodating new rail freight traffic". The HLOS also sets growth targets for rail freight, "both maximising the use of existing flows and the development of new business/terminal facilities".

It is in all our interests that this strong statement of policy should - through appropriate investment, innovation, facilitation and promotion over the next decade - herald a new dawn for rail freight in Scotland. 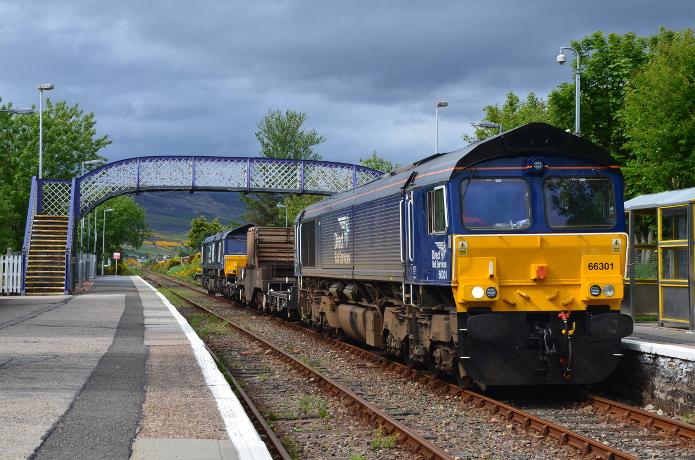 Far North Line available for more than just this and Lairg oil. Nuclear waste at Brora, 24 May 2017.
Photo: Andrew Bridges

This article is one of the monthly briefings which Transform Scotland produces for its Members and Supporters. It was written by David Spaven, Scottish Representative of the Rail Freight Group and FoFNL committee member. David discusses the role that rail freight can play in delivering a low carbon alternative to road freight for businesses across Scotland, and the challenges ahead for shifting freight from road to rail.