Earlier this year FNE and our sister publication West Highland News Plus, the magazine of the Friends of the West Highland Line, received a very kind offer from Frazer Henderson, Head of Rail Policy, Transport Scotland, of a guided tour of the refurbishment work on the class 158 and 156 trains currently being undertaken at Knorr-Bremse RailServices (KBRS) Springburn Works in Glasgow.

This was an opportunity not to be missed, to see just what is involved in refurbishing these trains.

John McCormick (FoWHL and SAPT), Tom Hart (SAPT), Paul Tetlaw (Transform Scotland) and I assembled at the works on the morning of 16 August. We were welcomed by Austin Wallace, General Manager, KBRS (UK) Ltd, the owners of the former Caledonian Railway works, who hosted the visit.

Also in attendance were:

The visit began with a presentation about Springburn Works from Austin Wallace. As well as refurbishment projects, heavy maintenance is done here too on both diesel and electric stock. The works is connected to the main line system with easy access for trains from Corkerhill and Shields depots in Glasgow. Work is also undertaken on trains from the north of England. There are fifteen vehicle locations for stripping, overhauling and rebuilding and there is a 10 kV electric track in place for testing purposes.

The overhead cranes which run on rails the full length of the workshop enable carriage bodies to be lifted off the bogies and placed on stands. Work can then be carried out simultaneously on all parts of the vehicle. 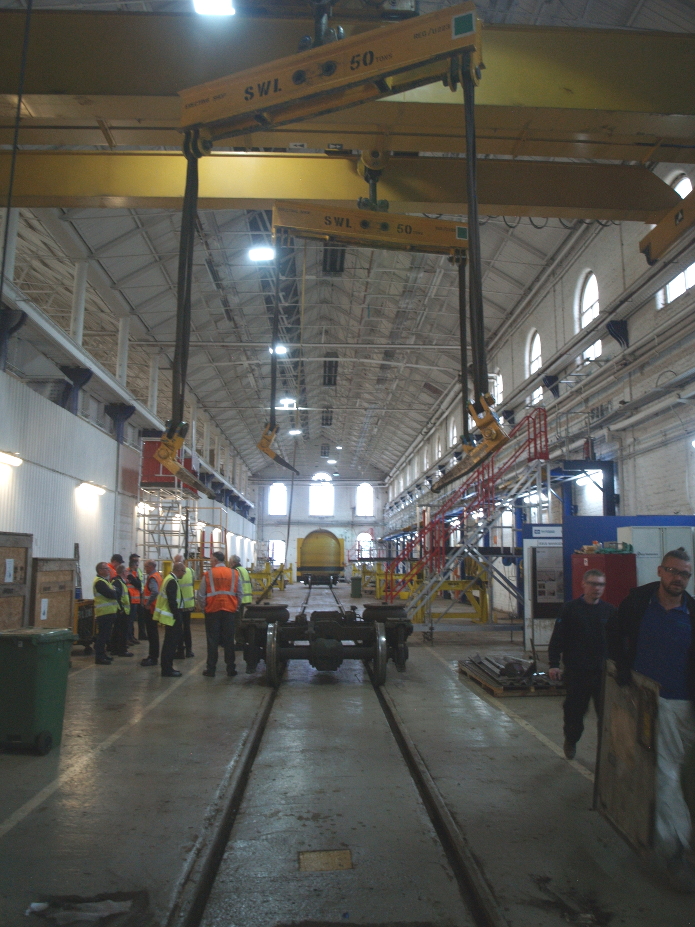 The works has 77 permanent employees, representing 60% of the labour force, supplemented by a dedicated group of contract staff.

There was an opportunity to ask questions at the end of the presentation and then it was on with the industrial boots and goggles and into the working areas.

We began by having a look inside one of the Inverness-based class 158s which are used on the FNL. The work on these trains, which had last been extensively refurbished for the FNL in 2007-8, is almost complete. The Haymarket-based units are following on and indeed two of them were already there waiting their turn.

The process involves removing the seats and the windows and all the surface coverings which are either repaired or replaced. Extensive work on improving the existing systems, such as air conditioning, toilets and motorized doors, as well as the addition of USB sockets for every fixed seat and 230v power sockets at the table bays is carried out. The interior is then put back together and the finished result, after painting and application of exterior vinyls, is indistinguishable from a new train.

The refurbished trains have an electronic monitoring system which logs the performance of air-conditioning and doors, making future diagnosis and repair considerably easier.

Each unit is in the works for less than a month, the Inverness units pass through slightly more quickly than the Haymarket ones because their seating bays had already been reconfigured to line up with the windows in the 2007-8 refurbishment.

There have been worries about the 158s being underpowered for some of the gradients on the FNL. Mark Isbern from Porterbrook Leasing explained that testing has shown that the installed 350hp engines have the same acceleration characteristics as the higher-rated engines until they approach 90 mph. There has been much good work carried out recently on the engines and cooling systems, with new radiators and controls fitted across the 158 fleet, which will improve performance. 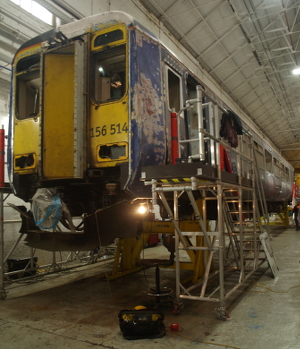 We were then taken to view the work on a class 156 unit, belonging to Angel Trains, which had been lifted off its bogies and was supported by 'legs', with enough space for work to be carried out beneath at the same time as on the interiors. This facility, achieved by making use of the built-in overhead cranes allows a significant reduction in time out of service for the trains. I couldn't help but wonder just how complicated it must be to plan the workflow so that as many people as possible can work at the same time - I was assured it is indeed complicated!

A major difference between the 158s and the 156s is the construction method used. The 156s bodyshells are made of steel which in the 30 years since manufacture has suffered serious corrosion. This requires replacement and/or repair. The 158 units, which are a little newer, having been built between 1989 and 1992, use a monocoque construction of aluminium. This is lighter and does not suffer the corrosion problems of steel. 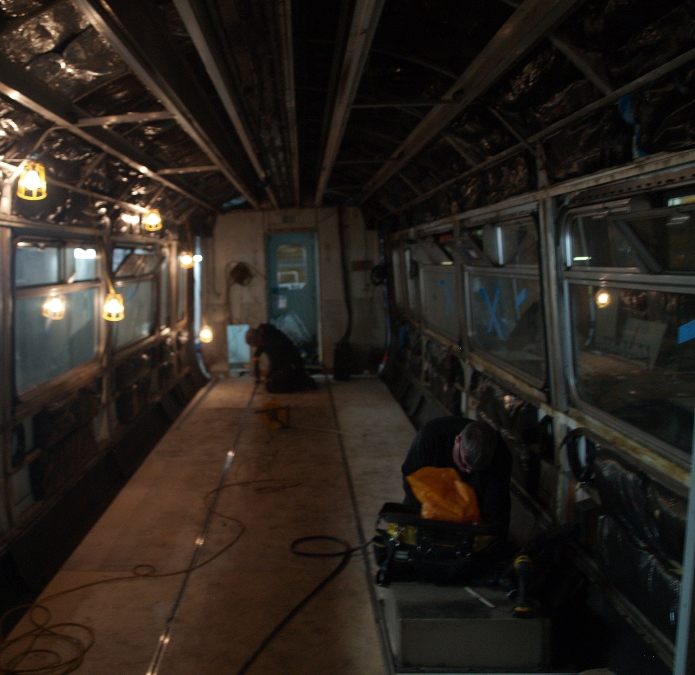 Stripping out. The state of the old insulation was memorably described to me as 'mush'!

The detailed work we were shown was extremely interesting and made you realise that when the media complain about 'old trains' in service they are often missing the point. I was put in mind of the kind of restoration work you see at classic car shows or preserved railways where the rebuilding process means that all that's left that's actually old is the underlying structure and the visual design. I should add though that in this refurbishment the engines and wheelsets are not replaced. However, these items are continuously maintained to a high standard anyway.

Looking back over the day my greatest impressions are as much about the people who showed us around and the works itself, as about the work being carried out. It is very good to know that serious railway work is still being done in Springburn, providing employment and continuing the fine tradition of the town which was once one of the main producers of locomotives for the world. Chatting to people from KBRS, Porterbrook and Transport Scotland, what came over above all was a tremendous sense of pride in what they were doing and enthusiasm - all were eager to explain and discuss.

What is now known as Springburn Depot was built by the Caledonian Railway in 1853. Known as St Rollox Works, it was one of four locomotive works in Springburn, a town a couple of miles north of Glasgow city centre. At their peak the railway works in the town employed around 15000 people.

Photos of the Class 156 unit are published with permission of the owner, Angel Trains.