What is a Tourist Train?
David Spaven reflects on a train operator making the best use of wonderful scenery as he found on a trip to Germany earlier this year.

Among the attractive features of the Abellio offer for the ScotRail franchise - prompted by the Scottish Government in the tender process - was promotion of 'Great Scenic Rail Journeys' over six Scottish rail routes, including the Far North Line. There is now a commitment to marketing Scotland's scenery, its heritage and its tourist attractions, to a wider rail audience. And dedicated on-train tourism 'ambassadors', trained by VisitScotland, will provide information on attractions, history and journey connections.

But what about the rolling stock? In Switzerland, Canada and the USA, purpose-built observation cars allow the rail traveller to fully appreciate the stunning lineside scenery, but the Scottish offer goes no further than modest refurbishment of the elderly Class 158s. In contrast, I found, on a trip to Germany in June, that diesel units have been built in relatively recent times, for local or regional operators, with two distinctive features: first, the ability to look over the driver or guard's shoulder to see the view directly ahead or behind the train, and second, sufficient power to haul other coaches, such as those conveying bikes en masse.

On the Black Forest Railway, Deutsche Bahn and local tourist authorities have got together to provide panoramic viewpoints and attractive information boards at stations and along the lineside. And if you're a visitor, then a modest 'tourist tax' payment gives you free use of all local public transport by bus and train!

As I concluded in Highland Survivor: 'realising the tourism potential will surely require new trains - not just on the line to Caithness, but for all the scenic Highland routes - with observation facilities to attract many more visitors to this very special railway.' Will Scotland ever have the strategic vision to deliver that kind of transformational change? 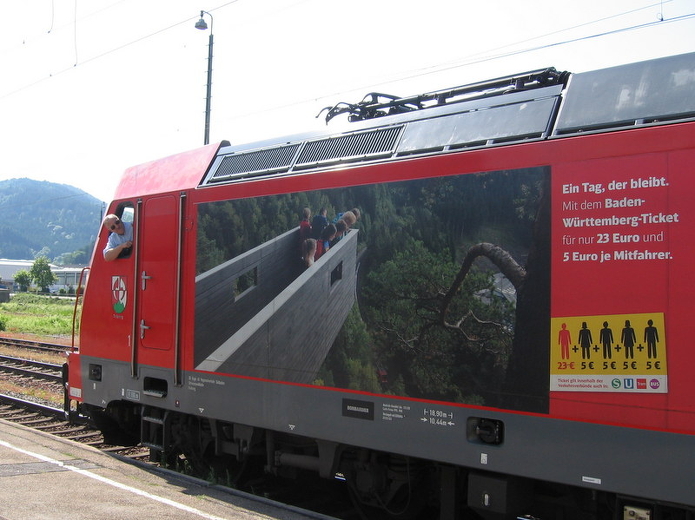 Seen at Hausach (the junction for Freudenstadt) on 3rd June, the Class 146.2 loco of a southbound Schwarzwaldbahn train from Karlsruhe to Konstanz sports a livery promoting the purpose-built panoramic viewpoints further south alongside this spectacular mountain railway. Completed in 1873, the line involves a height difference of no fewer than 670 metres between its lowest and highest points. Class 146.2s operate electric RE and IRE (Interregio-Express) trains across Baden-Wuerttemberg. [With thanks to Bill Jamieson for loco intelligence] 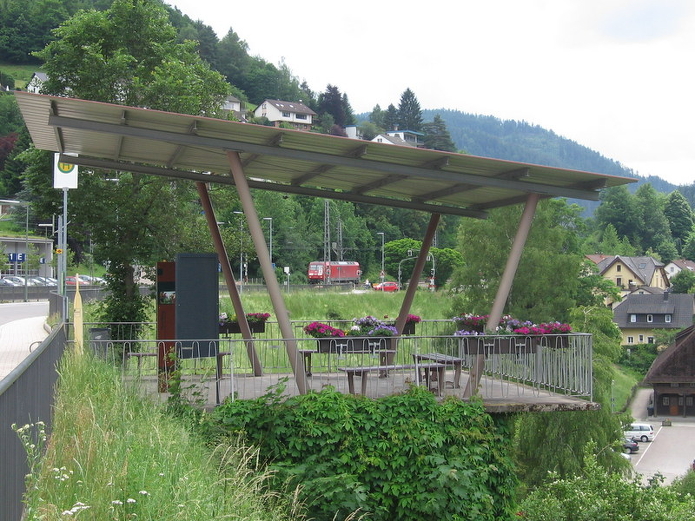 Framed by a Schwarzwaldbahn panoramic viewpoint structure, a light electric loco hurries through Hornberg in the Black Forest. 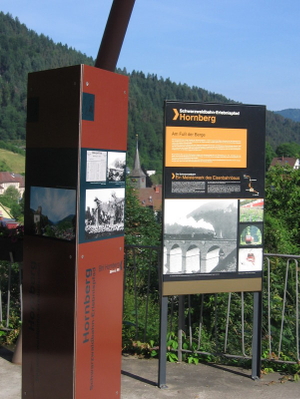 The panoramic viewpoint beside Hornberg station features detailed information boards on the history and geography of the Schwarzwald-bahn and its surroundings. Shouldn't Scotland be emulating this imaginative approach to promoting scenic railways? 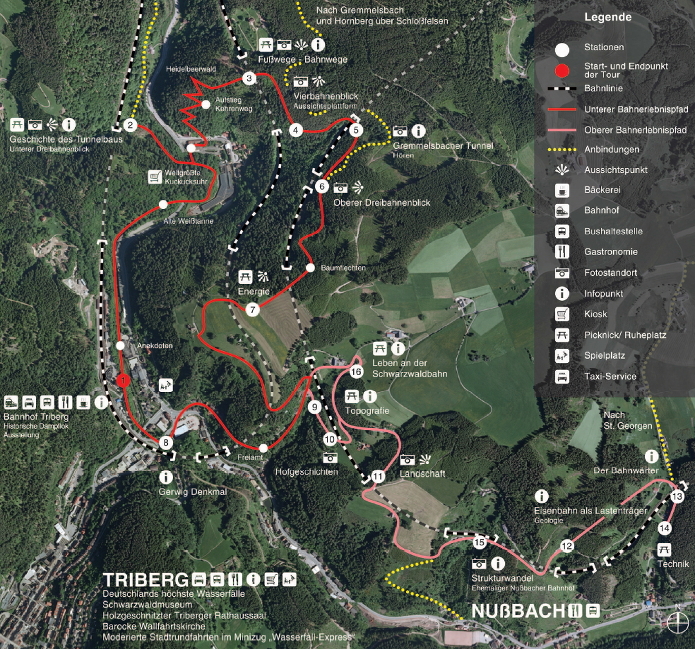 A substantial information board outside Triberg station illustrates the dramatic sweep of the Schwarzwaldbahn (the black and white line) and the accompanying Erlebnispfad (discovery path) in red. This considerable feat of engineering, which proved to be a model for rail construction in other mountainous parts of the world, involved a distance of 11 km as the crow flies from Hornberg to St Georgen being extended to 26 km of track length - but with the outcome that no gradient is steeper than 1 in 50. 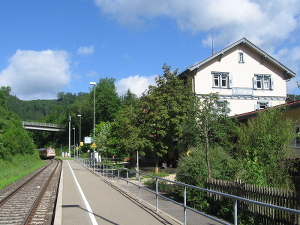 [Left] A Naturpark-Express service from Tuttlingen to Sigmaringen, operated by the regional Hohenzollerische Landesbahn company, pulls into Beuron station on 10th June. These summer Saturday and Sunday services are supported by local and regional authorities, and convey large numbers of bikes free of charge along this line which parallels the popular Danube cycle path. 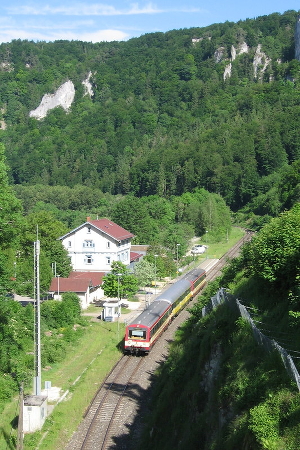 [Right] A Hohenzollerische Landesbahn Naturpark-Express service from Sigmaringen to Tuttlingen departs Beuron station on 10th June. A van conveying bikes is marshalled between the two single-unit railcars - each capable of hauling a 400t trailing load - which are modified versions of the NE81 units built from 1981 for 'private' (regional) operators. Why can't we have such innovative designs for rural routes in Britain? [With thanks to Bill Jamieson for loco intelligence] You can also see out of the front of the train, over the driver's shoulder. 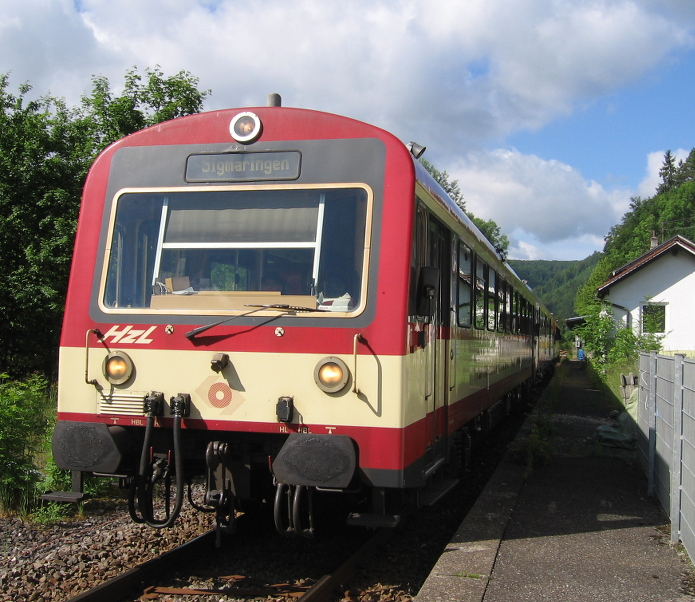 A Naturpark-Express service from Tuttlingen to Sigmaringen on 10th June pulls away from lonely Thiergarten station, which is served only by these summer Saturday and Sunday services. The photographer was amused to find that the exit gate from the station was locked, and he had to climb a fence to leave railway property! 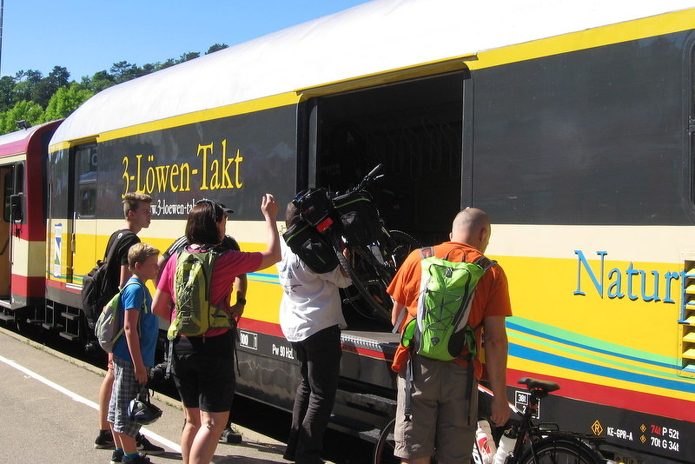 The bike van on a westbound Hohenzollerische Landesbahn Naturpark-Express service, seen at Sigmaringen on 11th June.