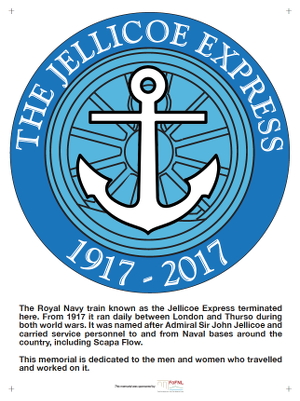 To commemorate the 100th anniversary of the first 'Jellicoe Express' troop trains from London to Thurso, Moya Macdonald from Another Orkney Production has been organising the placing of plaques along the route.

On Saturday 30 September at 10:00 the plaque at Helmsdale is to be unveiled. The ceremony will be accompanied by a small display in the Station Waiting Room and will be followed by refreshments from the WVS tea trolley to the accompaniment of music provided by

At 11:45 there will be an illustrated talk at Timespan, given by Orkney historian Robert Foden entitled THE JELLICOE EXPRESS -The Royal Naval Special from Euston to Thurso.

Lunch will be available afterwards in the Timespan café.

On Thursday 5 October, at 11:15, the plaque, sponsored by FoFNL, is to be unveiled at Thurso station by FoFNL president Jamie Stone MP. It is particularly appropriate that we should sponsor the northernmost one.