Railfreight - a Key Part of Tackling
the Climate Emergency

This article, by renowned railway author and FoFNL Committee member David Spaven, originally appeared as a Friends of the Scotsman piece on 12 November 2019

Since First Minister Nicola Sturgeon declared a 'climate emergency' in April, the political agenda has been moving inexorably - albeit too slowly - towards a radical transformation of Scottish transport investment priorities. And last month a collaboration of seven sustainable transport campaigns came together to make the case for a fundamental re-prioritisation, 'starting with an end to creating new trunk road capacity'.

Scottish Government policy already backs rail freight - not least for its substantial carbon advantages over road haulage - but achieving (and hopefully far exceeding) the growth targets it has set the industry will need a very significant change in the balance of investment between rail and road. New or enhanced infrastructure is a fundamental part of the solution, with the road haulage industry having benefited enormously from high levels of funding for new roads such as the Aberdeen Western Peripheral Route, A9 dualling, M8 completion and the M74 Northern Extension.

Earlier this year, the National Infrastructure Commission published its Freight Study which included a key recommendation with important lessons for Scotland:

"Government should undertake detailed cross-modal analysis, using a corridor-based approach, of the long term options for rail freight's transition to zero emissions, including low carbon rail services and the scope for road based alternatives."

This kind of approach has been sadly lacking from the Scottish Government, classically in the context of imbalanced road and rail investment on the Perth-Inverness corridor. The rail spend has been just £65m to date - despite £200m-£450m mooted in 2008 - in contrast to road benefiting from the £3,000m A9 dualling project. And still the daily Stobart / Tesco train to Inverness is restricted to 20 containers - because of the short crossing loops on this largely single-track railway - when the locomotive could actually pull 28.

So, what are the key enhancements required to create a competitive 'level playing field' between road haulage and rail freight?

The modernisation of strategic Anglo-Scottish route corridors is fundamental to unlocking the potential for rail freight to better serve domestic and export markets. Amongst the core upgrades needed are:

But rail freight cannot prosper simply by concentrating on the Anglo-Scottish lines. Upgrading key feeder rail routes within Scotland is crucial to the strategy, and some of the obvious targets are:

Improved rail routes are essential, but realising their potential depends in part on the creation of new or enhanced rail freight terminals to serve currently neglected regions. Amongst the priorities should be:

Serious progress on this kind of programme will demonstrate that the Scottish Government is committed to ensuring that transport plays a full and proper part in tackling the climate emergency - and, in so doing, also securing the substantial road congestion, road safety and road damage benefits of switching freight from truck to train. 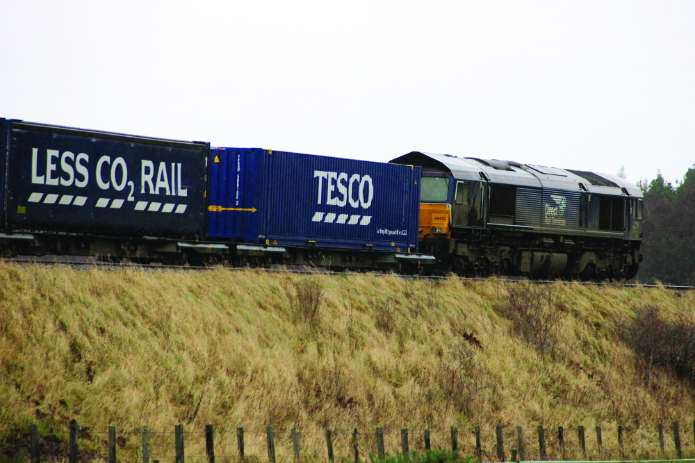