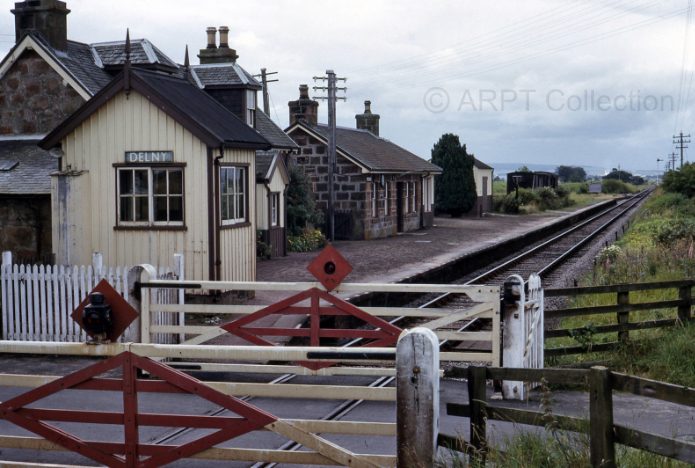 I started work at my local railway station, Delny, straight out of school when I was 15 as a junior porter. This was to be my job for the next three and a bit years. Life was quite varied at such small country stations and one learnt all about selling tickets etc.

We sent off lots of seed potatoes in the winter and one of the jobs was to line the vans with straw as they were being loaded, 8 to 10 tones in each van. This was OK as long as the straw was dry but some farmers sent very wet straw.

One had to be very careful when putting the labels on the vans and not have a different destination on each side. Access to the label clips was restricted on the side next to the loading bank as the floor of the van was level with the loading bank, always a squeeze to get access. Grain was another of the outwards goods the grain sacks were hired to the farmers, I well remember the first one I carried, 2 cwt = 16 stone and I was still a small light-built boy of 16 yrs, I thought my legs would buckle under me.

When the sack hire was over they were taken back to the station, a bundle of ten and a bundle of nine and put in one sack to total twenty. I always had to empty them out and count them, big awkward and clumsy to do.

Folding wagon sheets (covers) another job and on a windy day, I'm sure I was the first hang glider pilot at that station.

Now, although I had this job, I had no desire to be doing it and had wanted to be a motor mechanic, unfortunately I couldn't get an apprenticeship. There was a level crossing at the station in those days and last thing at night the station master always closed the gates to the road and pulled the signals but if the milkman beat me to it in the morning I was in a spot of bother. It didn't make for a pleasant few hours.

One crofter, who lived nearby, had a pair of horses and he, like a few locals, came in to chat. He would tie the horses to the gate and one horse in particular would chew the top bar of the gate, indeed it was almost eaten through.

Now that I had become 18 it was time to be off to do my bit for Queen and Country so it was goodbye to the railways for the next two years. After returning to civvy street I searched around for a job, but nothing was happening so I went to see the staff people in Inverness as there was a job in Bonar Bridge (now Ardgay) which would have done me fine. They had other ideas though as they had a few places they couldn't get staff for, namely Struan, Strome Ferry and Achnasheen. I told them I'd think it over.

A couple of weeks later, and still no job. I spoke to the staff office, Achnasheen was the only job on offer so I decided I would take it. [This would have been a junction had the Loch Maree & Aultbea Railway been built, as described in the article on p26 - Ed] After three weeks training I was passed in rules/regs etc and appointed to the job. I was still 20 yrs old and the youngest signalman in Scotland. In those days at rural stations signalmen had to perform many and varied duties. One of the duties at Achnasheen was the mid-day trains, shunting the dining car from the rear of the Down passenger train to the Up passenger service, not too difficult as long as the Up train crew remembered to shut the steam off after leaving Achanalt. Otherwise a very dodgy exercise with scalding steam.

Well, life went on, and living in the railway bothy at Achnasheen was hard, it wasn't unusual to find your breath frozen on the blankets in the morning. No TV or electric in it either.

I remember one day the mid-day trains were in the station and it was really busy when a swarm of bees arrived, I can guarantee it's the quickest I've ever seen a platform clear of people (me included).

After a year at Achnasheen a job for a different relief signalman at Inverness came up, so I applied and got the job. 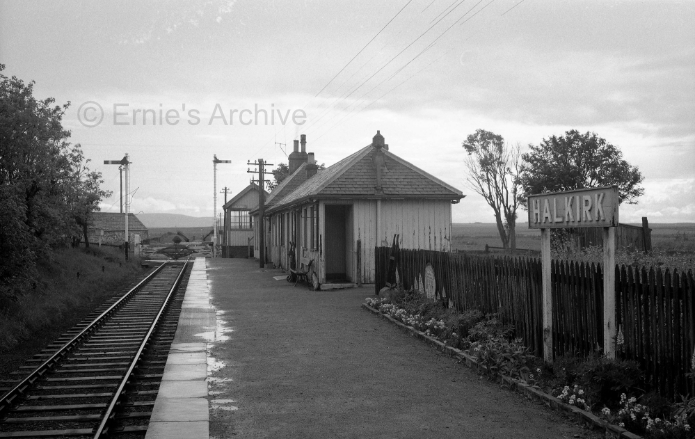 The first job I got sent to was Halkirk, a few weeks there then it was learning the different boxes in the area. The area for Inverness staff was Georgemas to Dunkeld, Kyle to Forres and the Dava line to Aviemore. Including the Inverness station boxes. One instance which sticks in my mind is Millburn Junction, I learnt it over a couple of weeks, two days one week, three days another, then I got a shift in the box. I wasn't in that box for another 19 months when my orders were to take duty at 00:01 on a Monday until 06:00, then 14:00 - 22:00. That was an all time challenge, figure out all the train movements and not route Aberdeen train to Perth line and vice versa.

After ten years on Inverness relief, a job came up at Kyle of Lochalsh as a rest day relief signaller/relief signalman. Well, by this time I was getting a bit tired of roaming all over the place so I applied and got the job, almost semi-retired.

One of the jobs was to be on site when contractors were blasting close to the track, apart from the weather it was a good paying job, lots of overtime. By 1974 Invergordon was very busy and had only two signallers instead of three. Unfortunately one of them passed away so Syd Atkinson came up to Kyle and asked if I would go to Invergordon to help out as I'd worked there before. At that time the Kyle line was under severe threat of closure so I said I would go for 12 weeks, as by that time I would know what was to happen at Kyle, and if it closed I could collect my redundancy money, leave the service and join at Invergordon as a new start, all very handy as I was about to get married. In the end the Kyle Line got a deserved reprieve and, as for me, the house supply at Kyle was dire, I knew of one man who waited seven years for a house so in the end, and for domestic reasons, I reduced my grade and took the job at Invergordon, so my 12 week job lasted for 12 years. 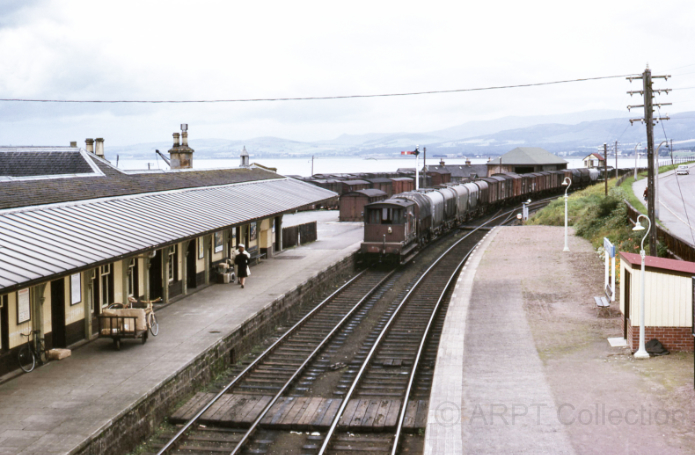 Well, over the years one or two instances occurred, for example, I got a message from Control to say that a motor bike had crashed onto the track between the distillery and the station, I sent 6 bells (obstruction danger) to Tain but almost immediately I got the 'train entering section' from Tain. There had been two on the motorcycle and one had a suspected broken back. The Area Manager lived in Alness and the District Inspector lived in Tain. Well there was no time to deliberate on the matter, I wrote in the train register, "signalman out of box to attend an emergency", I grabbed my hand lamp and detonators and headed for Delny level crossing, I remember driving through Saltburn at 80 mph. I got to Delny ahead of the train and got the detonators on the track while waving a red light violently to get the train stopped, I remember the driver that night was renowned for a bit of speeding. I instructed him to proceed at walking speed and be prepared to stop between the distillery and the station. 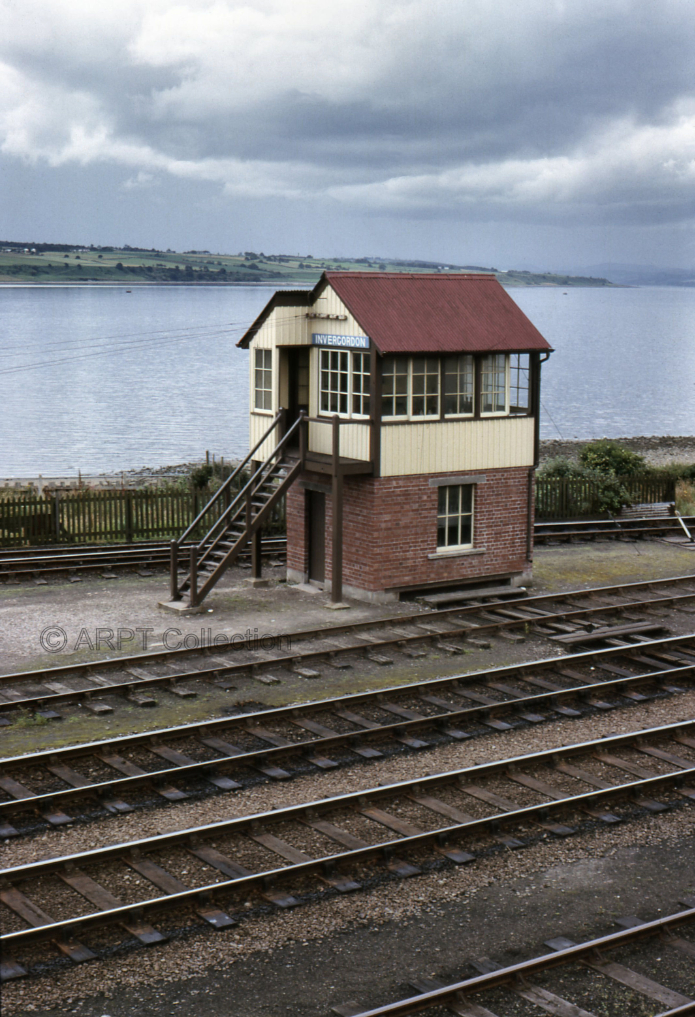 Even at my first station, Delny, there was a customer who enjoyed a tipple on a Saturday and as he was walking along while the train was leaving the station he fell between the train and the platform, I put a red to the fireman and either he was looking back, the driver being the other side, or the guard stopped the train. I didn't know what to expect but our hero had climbed out between the train and the platform and not a bit the worse.

In January 1978 a severe snow storm took down miles of overhead wires and due to the time/cost to replace them a method of controlling the token instruments was contrived to operate them by radio from Tain northwards. Further developments of this led to the RETB system coming into being. It trialled very successfully on the Kyle Line for a year and by December 1985 it was decided it would be used from Dingwall northwards. After many trials and tribulations, in particular at Lairg and Forsinard, Chris Green said the system was to be commissioned. Well, for a while it had to be discontinued north of Helmsdale. By that time I was redundant at Invergordon, along with all the other signallers on the Far North Line. New jobs on the RETB were advertised but as no grading was in place the points system of traditional to grade a signalbox was not available so the jobs were advertised as temporary. I got one of the jobs and a sort of simulator was rigged up, but we had to do the training without a driver on the other end of the radio. After 3 weeks of this we were considered competent. So to coincide with Chris Green's commissioning date it all began. I'll not go into all the details, but the drivers refused to use it, so a pilotman system had to be invented. The drivers refused to write out the cards. In the end the signallers and supervisors were being sent on the trains as pilotmen. A real shambles.

After around 18 months, by which time the system was somewhat better, the whole thing was moved to Inverness. Again I got one of the jobs there and completed my signalling after 18 years, as a RETB signalman.

I was on duty when the Ness Viaduct got washed away, so I sent the final train over the old viaduct, and it was arranged for the same drivers/signallers to be on duty for the official opening of the new one. I asked the driver of the Up Kyle, "Why are you two years late?"

Lots of railway staff had nicknames such a The Hen, The Duck, The Gull, The Crow, The Penguin, Budgie, Magpie, Blackbird, Deputy Dog, Jaws, Cowboy, The Duke, Fugitive, Clava and so on.

So that was my 50 years as a Highland railway signalman. Would I do it again?