A Railway Terminus on the Moon

A short history of the Loch Maree & Aultbea Railway

In May 1889, a series of public-meetings was held in the villages of Poolewe, Gairloch and Aultbea. From these, a body of land-owners, merchants, ministers and sundry Mackenzies came together on the 14th of the month to constitute a grand-sounding 'Joint Committee', chaired by John Dixon. The decision of this meeting was to recommend the construction of a railway from Achnasheen to 'such a point on the parish of Gairloch as would best develop to their utmost extent the fisheries of the Lews, and of the North-West Highlands and Islands of Scotland generally.' This was the beginning of a short, but energetic, campaign to construct what later became known as the 'Loch Maree & Aultbea Railway'. 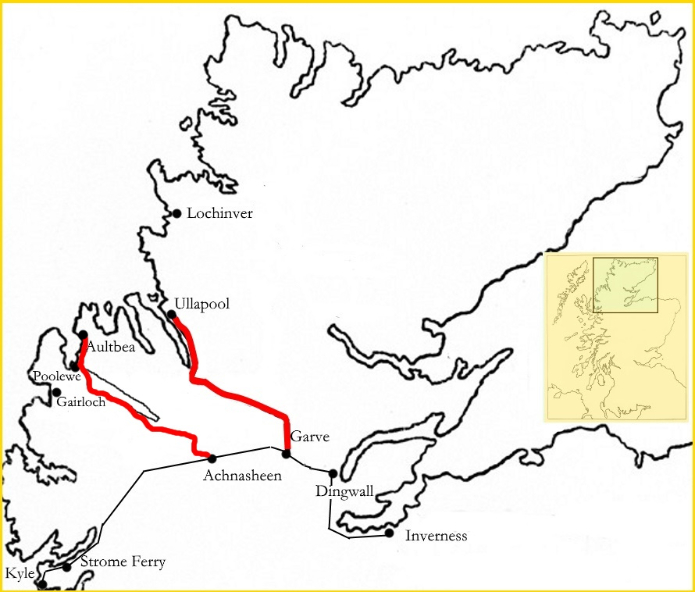 In its conception, and in the campaign which followed, the principal motivation for the Aultbea line was a determination that the rival Garve to Ullapool railway should fail. The latter had been first proposed in 1885, but it was in the Spring of 1889 that serious moves took place to acquire legal permission and, more importantly, finance, to build it; plans were already well advanced to conduct a full survey of the route and to apply for an Act of Parliament to build the line. This is almost certainly what spurred the people of Gairloch parish into action; thereafter, almost every argument made in favour of the Aultbea line referenced the Ullapool proposal - and not in a good way. 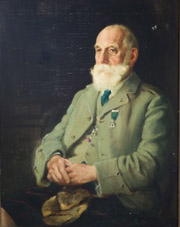 The main proposers of the Aultbea railway were, unsurprisingly, either rich, or owners of large estates, or both. They comprised: Sir Kenneth Mackenzie, 6th Baronet of Gairloch, and owner of some 170,000 acres of land; the Earl of Lovelace and Duncan Darroch of Torridon, both owners of large estates in Torridon (Darroch later dropped out, to be replaced by his neighbour, Ogilvie-Dalgleish of the Coulin estate); Paul Liot Bankes, son-in-law of the deceased coal-magnate Meyrick Bankes, who owned the Letterewe and Gruinard estate; and John Dixon, a man described by a contemporary as 'a reputed Croesus', who rented Inveran House from the Mackenzie. It was Dixon who co-ordinated all the activities: he was an indefatigable letter-writer and propagandist, and adept at scathing critiques of the Ullapool project. The arguments put forward in favour of the Aultbea line, and rehearsed almost daily in letters and petitions and memoranda between 1889 and 1892 were that:

Aultbea was closer to Stornoway than Ullapool, and therefore more convenient for both fisheries, mail and passenger traffic;

Aultbea was closer to 'the sea' than Ullapool, and the latter was much beset by the tides;

Loch Ewe was a far better haven than Loch Broom - indeed, navigation in the latter was fraught with danger from rocks and reefs and unpredictable squalls;

the construction of a railway line to Aultbea was going to be far easier than one to Ullapool;

Ullapool was in decay, while Gairloch and Aultbea were thriving.

These, and anything else which came to mind, were the arguments which raged back and forth between the Loch Broomites and the Loch Eweites. It was not a pretty sight.

Both parties vied for support, not just from the locals and Whitehall, but also from the population of Lewis. In the long dark evenings of winter, fishermen and crofters attended public meetings in Stornoway, Carloway and the smaller townships, signing petitions to their heart's content and berating the opposition. By and large, but not exclusively, the Lewis people supported Ullapool. After one such meeting, the Reverend Hector Cameron of Back wrote to the newspapers announcing that 'should a census be taken to-morrow of the entire population of the Lews, we should henceforward hear as little of an agitation for a railway terminus on the moon as for one at Aultbea.'

But if Aultbea was losing the popular campaign on Lewis, Dixon was second-to-none in making a noise in Whitehall; the staff at Dover House, office of the Secretary for Scotland, were soon clutching their heads in despair at the sheer volume of correspondence arriving from the Gairloch area. So many were the letters sent out, that Dixon had special notepaper ordered up, with a printed heading stating unequivocally 'Proposed Fisheries Railway to Aultbea for the Lews'.

A proper survey of the proposed route was conducted in 1892, by the most reputable firm of Thomas Meik and Sons. The Meiks' 'Plans and Sections' document was a masterly piece of work. Slightly eccentrically, the document identified not one, but three railway-lines.

The first, confusingly labelled 'Railway No.3', ran south-westwards from a junction just west of Achnasheen station on the Dingwall to Strome Ferry line for a distance of 7 chains and 13 yards. This took it clear of Highland Railway land and into virgin territory.

The second section, 'Railway No.1', by far the longest at 29 miles 4 furlongs 8 chains and 5 yards, ran all the way to Poolewe. Rather than follow the road (now the A832) west out of Achnasheen, it circled round the back of Ledgowan Lodge, passed south of Loch a'Chroisg, and remained well south of the road to take advantage of the hillside contours, before looping north to enter Glen Docherty. Then up the hill to the highest point on the line (750ft); descending the glen on its southern slope at a gradient of 1:33 for three miles; swooping around the western end of the glen; circling south of the village of Kinlochewe on a tall viaduct; and then rejoining the road. It then hugged the south shore of Loch Maree as far as Slattadale. Where the road then veers due west towards Gairloch, the railway instead heads north along the shore, straight for Poolewe. Which was an interesting move: the southern shore of Loch Maree is by no means a level plain at the western end. Indeed at grid reference NG880766 there are two major bluffs of rock which loom 300ft high above the waters. No problem: the Meiks envisaged here not just one tunnel, but two, 100 yards apart.

'Railway No.1' ends at Poolewe, and is immediately succeeded by 'No.2'. This split may have been to allow for the line to terminate at Poolewe, should finances run dry. No.2 heads northwards along the east shore of Loch Ewe, skirting round the back of Osgood Mackenzie's Inverewe estate and terminating at the shore-end of the new pier at Aultbea. The total distance was 7 miles 5 furlongs and 9 chains. A new pier would be constructed for steamer traffic - and no modest stubby thing either: this one would be 180 yards long so that, at the far end, its deck would stand 25ft above the low water mark. A very respectable pier indeed.

The total length of the railway, therefore, was to be just under 37½ miles. But it had its fair share of engineering excitements. Over its total length, there were some thirty bridges to be constructed, of lengths between 15ft and 90ft. There were three major viaducts - one across the glen behind Kinlochewe with a length of 325ft (50ft high), another of 200ft at Ob Gorm, about two miles east of Talladale, and the third of 315ft across the inlet named Ob nam Muic, a mile further west, both about 35ft high. The railway would run within gawping distance of the renowned Victoria Falls. And then of course there was the magnificent double tunnel: the east tunnel would be 200 yards long, the west tunnel 137 yards, both buried under 200ft of mountain. The two tunnels were separated by a stretch of 100 yards above an 82ft drop - no viaduct is mentioned here on the plans, so we must suppose that the railway would cling by its fingernails to the hillside. 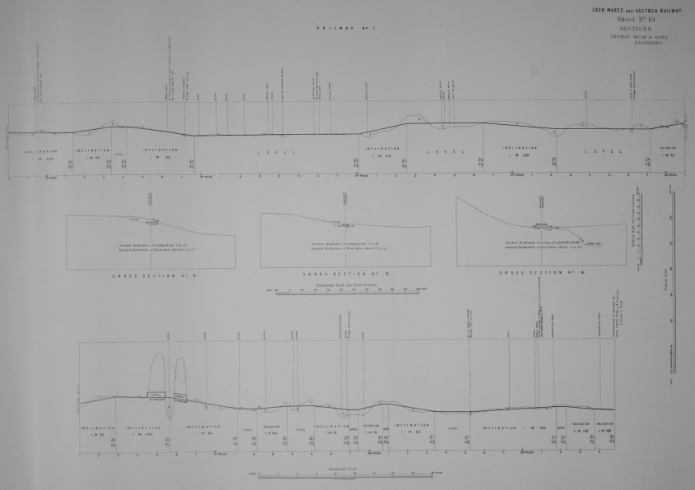 The 'Western Highlands and Islands Commission' of 1890, which visited all the proposed lines of the area and expressed itself thoroughly indecisive about most of them, recommended that any line to Aultbea should detour via Gairloch. But Mr Dixon was having none of that, pointing out that if would involve negotiating two small hills (the challenge of two tunnels above Loch Maree was clearly preferable); and possibly, although left unsaid, such a diversion would bring the line unacceptably close to Sir Kenneth Mackenzie's summer residence, Flowerdale House.

The Meik survey was a pre-requisite for submitting a Private Bill to Parliament, which would, it was hoped, result in an Act permitting the 'Loch Maree and Aultbea Railway Company' to acquire land, issue shares and ultimately build the line. Regardless of all the omens - the snub by the second Commission, the fact that Treasury was clearly going to subsidise the Kyle of Lochalsh and Mallaig lines, a change of government in August 1892, and the usual opposition from the Highland Railway - the proposers went ahead; a Bill was announced in the Edinburgh Gazette at the end of 1892. There is a report of the Bill being given a second reading in the Commons on 21st April 1893. And then - nothing. Sadly, the Aultbea railway, despite all its promise, received no further support.

Which is a shame: just imagine how a railway with not one, but three viaducts (not to mention two Alpine tunnels) would attract the tourists and film-crews in the 21st century! 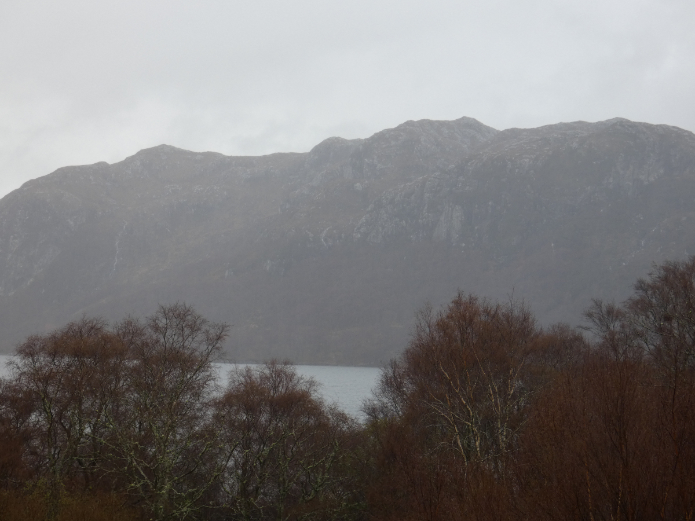 Andy Drummond's book on the Aultbea and Ullapool railways will be published in May 2020.

The maps and plans printed in this article were made available by the National Records for Scotland and are available for viewing in detail here.