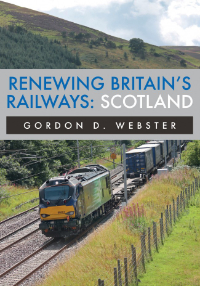 A well illustrated volume of changes particularly over the past four years, but with some archive memories back to the 1980s and 90s. There are separate chapters on freight; Edinburgh to Glasgow electrification; the sleepers; the Borders Railway; the West Highland Line; the Highland Main Line (HML) where the current capacity constraints are highlighted and the Glasgow area.

An interesting chapter discusses the lines where manual signalling still exists or has recently been replaced and tells us how budgets have slowed down further progress but the remaining manual signal boxes on the HML may be replaced by 2024.

Mentions of the Far North Line include the lack of catering staff and the occasional struggles of the pipe train to get to Georgemas. The author seems unaware that the refurbishment of the 158s was largely to bring the Haymarket allocation up to the higher standards we achieved for the Inverness allocated sets in 2008. ScotRail's publicity was a bit wide of the mark there and, as he says, the "tourist train" concept is still awaited.

FoFNL 25: Marking 25 Years of the Friends of the Far North Line 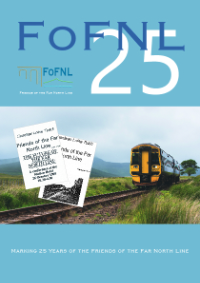 In November FoFNL published a 76pp A5 book to mark our 25th Anniversary in 2019.

It went to print just too early to catch the Review Team Final Report which was released on 1 November.

The book opens with a section introducing the reader to many of the people who have been, or are still, part of the organisation. It gives an insight to the vital skills and contributions which have made FoFNL what it is.

The remainder of the book is a 'timeline' in which we've reprinted a large selection of material, mostly from our newsletters/magazines, which introduces the reader to the work that FoFNL does.

FoFNL 25 concludes with a four-page illustrated guide to the line and a select bibliography.

The book is illustrated with a large number of photographs showing various aspects of the railway. Our members have already received their own copy but FoFNL 25 can be purchased from our website.