The Highland Council on the Wrong Side of the Road

As readers will be aware, FoFNL has been repeating over and over again that the Scottish Government's promise to complete the dualling of the A9 and A96 is no longer sustainable, especially as it is in direct conflict with the Government's own policy of modal shift to rail. We were therefore encouraged to see the publication on 10 August of Transform Scotland's detailed analysis of the Government's road building programme - Roads to Ruin. 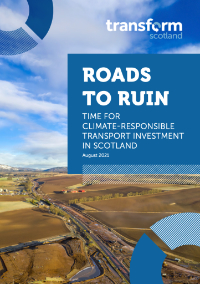 The publication of this 53-page document exposes the fault lines in the current situation where those who support such spending are in direct conflict with those who don't.

Clearly rattled by its contents, The Highland Council issued a press release less than a week later quoting several individuals in an instruction to the Scottish Government not to cancel the projects.

Interestingly one of the quoted comments didn't actually mention roads at all: 'Dr Tim Allison, NHS Highland's Director of Public Health, said: "Increased connectivity across Highland is extremely important and the development of transport links will bring many benefits to the area. It is vital that we develop sustainable transport links, including active travel and public transport, to enable quicker and safer travel between Highland and the rest of Scotland."' Since dualling roads which are already there clearly makes no new connections, this statement seems far more appropriate to rail. In any case it would be surprising to find a health expert extolling the virtues of increased road building.

Elsewhere in the press release we find: 'Professor Todd Walker, Principal and Vice-Chancellor of the University of the Highlands and Islands said: "Our communities need a sustainable transport network which balances environmental, economic and social needs and the future development of our regional economy relies on that. We also require that network to allow our staff and students travel to and from local campuses, across our operating area and further afield."' No mention of roads here either, just a "sustainable transport network"; anyway we couldn't agree more, but dualling the A9 and A96 is not the answer. The press release also quoted a surprising conclusion from Cllr Trish Robertson, "Trains can be unreliable in the winter months, and our rail infrastructure is limited, so over reliance on this form of transport would be an impossible and irresponsible proposition. We need to build our connectivity, not hamper it." We hesitate to point out the obvious about roads in winter but there's far more chance of a safe journey through snow by rail. The best way for The Highland Council to tackle the limitations of the present rail infrastructure would be for it to put its voice firmly behind getting the railway routes up to intercity standard as quickly as possible.

On 17 August the Press & Journal picked up the story, quoting the press release in full. FoFNL contacted the paper suggesting that to balance the arguments presented by The Highland Council we would like to make some comments too. On 19 August they published an article headed "'Extraordinary intervention': Rail campaigner questions backing for A9 and A96 dualling." In this we were given an opportunity to put the case: "The issue they address is how best to spend around £10,000 million on transport in the Highlands. By far the best way to achieve the economic recovery, prosperity and green future mentioned in the press release is to provide high-capacity, electrified, intercity railways from Inverness to the south and to Aberdeen. Until this is completed there can be no significant modal shift because the capacity of these mostly single-track railways is woefully inadequate."