The Question of the Refurbished 158s

Rhoda Grant MSP, Lodged the following question in the Scottish Parliament on 15/06/2015:

To ask the Scottish Government when the Borders Railway will have its own rolling stock, and what class of train will be used.

The Borders Railway will be operated by diesel trains from within the Abellio fleet and these run on various routes and are not dedicated to specific lines.

His statement is at odds with the Transport Scotland's press release of 29 June 2007 which clearly states:

"The [refurbished 158s] will run the Inverness to Aberdeen, Inverness to Kyle of Lochalsh and Inverness to the Far North routes bringing improved comfort and facility improvements to passengers." 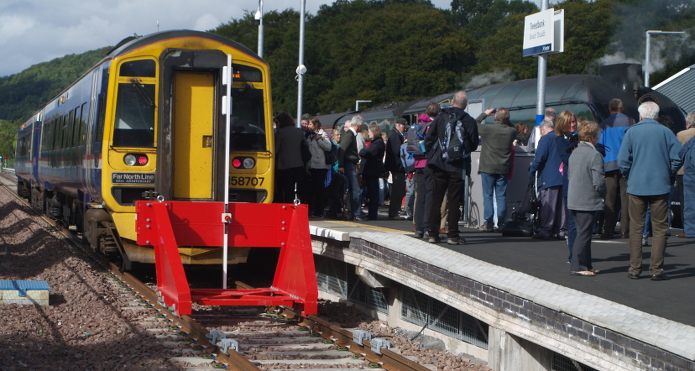 At that stage 170s were in charge of the HML. The first unit was 158701 - the one that has just been refurbished again and released to traffic last week. It was provided to work the then 07:14 INV-WCK for our AGM in Thurso on 14 July 2007, scheduled arrival time 11:02 (Note the 9 minute deceleration since then.)

"You will not grow the railway if you do not encourage more passengers to travel by train and if you do not improve journey times."

Haven't we gone tragically backwards since then?