ABC on the Far North Line

Nine members and guests sampled the delights of Altnabreac (ABC) on Wednesday 26 August under the leadership of our Past President, John Thurso. We travelled on the 12.34 from Wick (13.06 from Thurso) using the request stop at Scotscalder to pick up retired p-way chargeman, Lewis Sinclair, and arrived on time at 13.35.

The forecast had been for rain and we did have a few spots after Georgemas but we were met at Altnabreac by the local population of insects. They looked too big to be midges, but they had certainly turned out in force to greet their honoured guests. They were rewarded, just like phlebotomists, with many samples of blood but one of us with the forethought to bring a midge hood was able to road test it for the first time and it passed 100% in repelling the flying insects. The Wick contingent was so impressed that they ordered one each immediately they got home. The tube of antihistamine cream came in handy too.

FoFNL Convener, Mike Lunan, was pleased to be able to announce that the Help Point telephone which had been out of order the previous week was in full working order. John Thurso told us about being allowed, as a boy, to operate the signalling instruments and hand the token to the drivers of the steam locomotives. The old steam locomotive water tank tower is still standing and even has its contents indicator on the side.

The siding and ground frame were to be permanently removed early this July but the rails were still there. Frank Roach of HITRANS had been looking at the idea of timber loading there, so possibly that is not to be. Lewis told us about the dismantling of the signalling including a gantry in the 1960s. Only the point rodding was salvaged. The loop, which had been particularly invaluable for snow clearance operations, was taken out creating a 22 mile long section.

Dalnawillan Lodge and Lochdhu were no doubt built with materials brought by rail to Altnabreac. John Thurso told us that during his childhood they still had paraffin and Tilley lamps. You might have imagined that they would have had a generator by then. We didn't have time to walk to the very imposing Lochdhu House which was a hotel for a while. David Spaven remembered camping nearby and going to the cocktail bar for a drink. The ladies were all in cocktail dresses and he felt rather underdressed in jeans!

The Station Master in the 1950s had a big vegetable plot on the other side of the rails and even managed to grow sweet corn. John and Lewis and Iain MacDonald (retired signaller) were able to talk about Mr Archie Macmillan, the stationmaster, and other staff. Lewis brought along the station goods traffic book from 1951 until closure in 1966. It was fascinating complete with the auditor's green writing every six months and warrants further study. He also had the morse codes for each station on the local circuit phones. 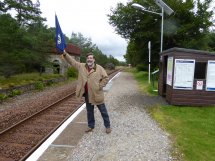 The station buildings have all been demolished and a modern bungalow built beside the platform. The former school was displaying a sign saying "ALTNABREAC DC twinned with WASHINGTON DC"

It was fun watching John Thurso flag down our train back with Mike's jumbo umbrella. We almost expected President Obama to step off the train. Two Presidents in one day. Would ABC ever have seen the like before? 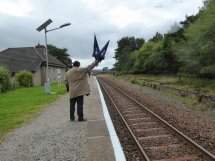 The ScotRail service was excellent in every way, but we all agreed that we would not like to be stranded at such an isolated station. Despite ScotRail's JourneyCheck sometimes advising that replacement buses and minibuses would call at all stations Forsinard, Altnabreac, Scotscalder etc none of us would like to put that to the test given the long bumpy roads and locked gates involved. We enjoyed every minute of the 20 minutes we spent there, but were content to get aboard the warm train with its hot drinks trolley and leave Altnabreac to the insects.