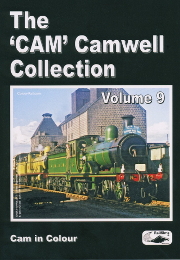 Volume 8 (North East England and Scotland) includes an extended section on the north from Inverness to Fortrose which includes Muir of Ord as it was in 1960. This is followed by shunting at Dingwall and footage of, and on, a train to Achanalt with a Black Five piloted by a Pickersgill 4-4-0. Alness, Delny, Tain shed, The Mound, Golspie, Helmsdale, Georgemas and Thurso are all shown. There is some early 1950s footage of Highland Railway 55051 on the Dornoch branch and of Ben Alder at Wick.

Volume 4 (Scotland and North East England) has some good footage of the West Highland Line, Clachnaharry, and of the Highland Railway Jones Goods locomotive between Inverness and Aviemore. There is a highly memorable scene of a Black Five on a train from Forres overtaking a train from Craigellachie where the two single track lines run side by side on the approach to Boat of Garten.

Volume 9 (Cam in Colour) is all in colour and starts with a 3 minute sequence of the Jones Goods between Inverness and Blair Atholl. The 1960 Scottish tour headed by the Jones Goods and Gordon Highlander is also featured. Footage then covers the rest of the British Isles and includes an Irish horse drawn tram. The prospect advertised on the sleeve of seeing "narrow gauge tanks on the legendary Tralee and Dingwall (sic) Railway" proves to be an Irish myth. Geography is not the editors' strong point with many pronunciations murdered, none more so than "Craig-ell-lachie"! All the DVDs have a commentary rather than any locomotive and train sounds. An interesting collection of memories nonetheless.