The Editor of Steam Railway magazine penned a short review of a new book "Cock o' the North: Gresley's Bold Experiment" * in issue no 446 dated 9 October 2015.

Unfortunately he got a major fact wrong. We are told that "the story of the ill-fated 2-8-2s designed [in 1933] for the steeply graded Edinburgh-Inverness route remains an enigma". It certainly does! They were actually designed for the Edinburgh to Aberdeen route, as it says in the book, and the A1 Locomotive Trust which built Tornado from scratch between 1990 and 2008 is now building a new P2. Tornado has already been to Inverness twice and to Dunrobin and Brora once, so we may eventually see the new P2 which has already been named "Prince of Wales".

What other appropriately named steam engines might we see in the north in our pipe dreams? Cawdor Castle on the Inverness to Aberdeen line; Duchess of Atholl and Wolf of Badenoch [an unlikely couple] on the Highland Main Line; The Lovat Scouts and even, perhaps controversially, Duke of Sutherland and Duchess of Sutherland on the Far North Line?

Wolf of Badenoch and Cock o' the North were both built as P2s and rebuilt in 1943 with a 4-6-2 wheel arrangement. Once the new Patriot class locomotive is built, all the above classes could be seen again in the north with a temporary change of identity to carry the local name and number.

Readers can no doubt think of other candidates for this honour. 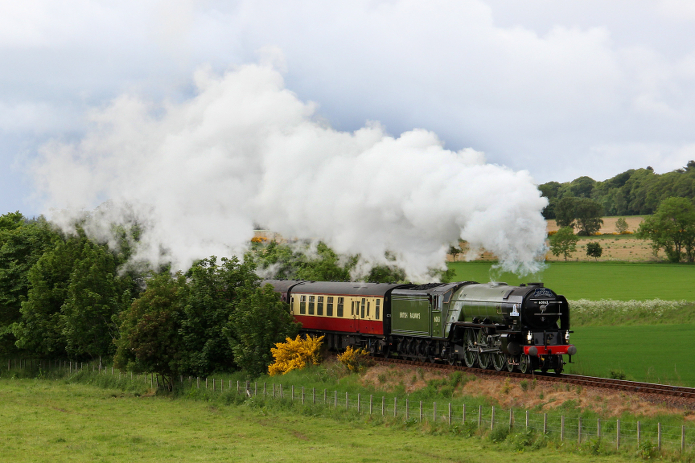