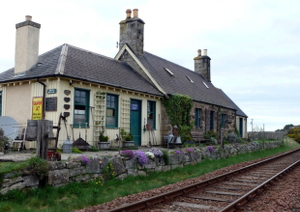 Loth Station house between Helmsdale and Brora is up for sale. Mr Chamberlain, the owner, has been there since 1994 having found it to be for sale by chance when walking. He renovated the property and used the waiting room as a railway memorabilia shop.

In an article in The Scotsman Mr Chamberlain said, "You see these places and fall in love with them. I never wanted to leave. It's got a lot of atmosphere. It's been wonderful. In the early days it was quite draughty and cold but it's never been miserable."

"It's very peaceful. We get deer here from time to time. There's the beach on the other side. I've only ever been cut off once by snow, and that was for about a week."

He added: "You get a feeling for the trains coming - the sound changes. They come by eight times a day. People jump because they are going quite fast. They go at 50 or 60 mph and they do go quite close to the window."

Carbisdale Castle, near Culrain and Invershin on the FNL is for sale at a price of £900,000. The castle was used as a youth hostel from 1945 until closure in 2011, which resulted in a noticeable loss to FNL traffic. 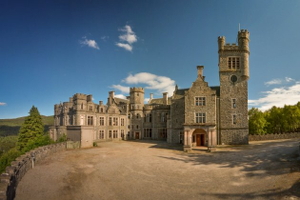 The castle dates back to 1905 when it was the last castle to be built in Scotland. It was built for Mary Caroline, Duchess of Sutherland, following the death of her husband George Sutherland-Leveson-Gower, the 3rd Duke of Sutherland. However, his family had disapproved of the Duke's marriage and after his death they contested his will.

Following a lengthy legal battle, they agreed to give the Duchess a substantial amount of money to build the castle - providing it was outside their lands. However, the Duchess had the last laugh as the castle was built on a hill where it could be seen from across a huge part of the family's estate, including the railway line. Subsequently, whenever the 4th Duke's private train passed the castle the carriage blinds would be pulled down. The Duchess also had the clock face on their side of the clock tower omitted as she did not want to "give them the time of day". It became known as "The Castle of Spite".

The B-listed castle of 40,000 square feet, including 40 bedrooms, also comes with its own loch and library. It was originally put up for sale in 2014 for £1.2million because it needed substantial repairs. A buyer had planned to invest £6.5million to transform the historic site into a luxury hotel, but the sale fell through.