The splendid new loops and signalling at Aviemore and Pitlochry are now in use allowing simultaneous arrivals of trains from both directions and thus reducing crossing times for trains. Bidirectional working also means some northbound services can now use the more convenient "up" platform at Pitlochry.

ScotRail is putting in an immense amount of effort to redesign the timetable between the Central Belt and Inverness to give an hourly frequency and some journey time improvements. I do hope that by December there will be sufficient refurbished HSTs to operate this to the full extent.

Coming back from the Scottish Association for Public Transport AGM at Perth on Friday 5 April we had a fully loaded "classic" four coach 125 on the 13:36 from Edinburgh. Time was lost because the conductor still has to manually check that the doors are all properly shut. Further time was lost waiting at Stanley for the late running southbound service to vacate the single track and again further north when we had to visit Kincraig loop because we had lost our path. 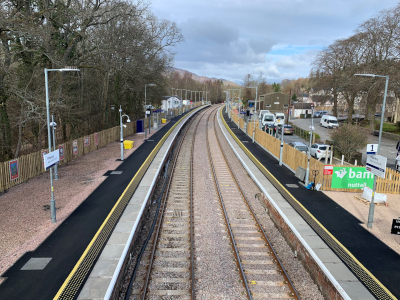 With the deadline of the A9 dualling completion looming at the end of CP6 it is so important that extra double track capacity is provided before then to get the travelling public used to a faster and more reliable HML which can more nearly compete with the road so that rail passengers are not further captured to road. Surely the climate saving imperatives so much in the news just now mean that we must prioritise the railway over the road for both passenger and freight traffic.

The Government looks like achieving its promise to introduce an hourly passenger frequency by this December, but what a struggle it has been to fit all these trains in on a largely single track railway. The £50m "saved" from the £117m budgeted for the now completed HML phase 2 has no doubt been welcomed elsewhere, but it could have been invaluable to reinstall previous HML capacity at Ballinluig, Murthly and Etteridge for example. Freight interests have been asking for the long loop at the former and there have been three train breakdown blockages of the long 13 mile section which includes the latter in the last 18 months causing long delays to passengers.

It is good that the promise to make services south of Perth limited stop expresses in the new timetable is being honoured. It is hoped that the days of these expresses following a stopping train all the way from Kirkcaldy to Haymarket will be ended which is no mean task on that intensively used track. Similarly, the task of accommodating more and faster services north of Perth, making sure stations both large and small are served regularly, and allowing paths for freight, maintenance and charter trains together with possible diversions (for freight at least) if the line south of Aberdeen is blocked is a herculean task within the constraints of the current single track infrastructure.

We are getting uncomfortably close to the revised time limit of 2025 for the promised three hour average service time between Inverness and the Central Belt with fastest times of 2 hours 45 minutes. With a fully dualled A9, the driving time will be more like 2 hours 30 minutes and the express buses may well be scheduled to less than 3 hours. A lot is dependent on the CP6 pipeline producing the goods in rail track capacity terms.

The job doesn't end there either. Robust connections at Inverness with the Far North and Aberdeen lines have to be provided. We live in interesting times!