Far North Line Investment is on the Right Track
This article from the Network Rail website lists some of the work that has been done in Control Period 5 on the Far North and Kyle Lines. Although your editor hates rail story headlines which include the astonishingly clever "on the right track", he let this one pass! 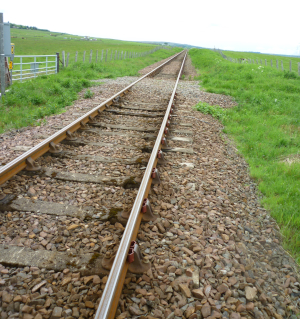 Network Rail has completed an £11m, two and a half-year project to renew and replace sections of track at 59 sites along the Far North Line in the north of Scotland.

Work included replacing a total of 36 miles of rail and more than 11,000 sleepers, as well as in some cases full renewal of sections of track on some of the most remote stretches of railway in the country.

The upgraded rail will improve reliability and comfort for passengers as well as delivering a reduction in future maintenance requirements.

In addition to the logistical challenges of working in some extremely remote locations on the single-track railway, the delivery of work also endured the challenge of winter weather in the far north of Scotland - overcoming both a washout of a section of track at Loch Luichart following heavy rain as well as the winter blast from the beast from the east.

When storm floods caused the track to 'wash-out' at Loch Luichart in August 2017, the Network Rail team with contractor Stobart Rail, were able to divert plant and resources working locally on the project to the site of the damaged track.

After clearing debris from the damaged area, 300 tonnes of ballast was replaced and the track stabilised; a rapid response which ensured that the line could quickly re-open for passenger service.

One of the most significant sections of work was at Thurso where the project renewed more than 6.5 miles of track between the town's station and Georgemas junction - removing more than 40 track faults on this section alone.

In an innovative first for Scotland's railway, the 1,100 rails used in the work were delivered by sea to Scrabster harbour - which saved 110 road freight journeys and reduced carbon emissions by approximately 200 tonnes.

Lindsay Saddler, Network Rail's head of maintenance, said: "We are committed to investing in the Far North line and between 2014 and 2019 we carried out more than £30m of work on the line - including £11m alone on the track renewals.

"The overall investment we have made includes renewing signalling systems and track sections across the route, improving earth works and structures and work at Level crossings to improve line-speeds and is all part of improving resilience and reliability in this part of the network.

"Although the Far North Line is not the busiest or highest profile part of our network, we realise and value the role that it plays in connecting isolated locations and the importance that it has in rural and remote communities it serves."