Time Does Transfix
FoFNL member, Les Turner, kindly passed on to us a book written by Alfred H. Forbes. He eventually became Provost of Forres from 1965-75. However, he left school early and became an employee of the Highland Railway, weeks before it became part of the L.M.S., where he found himself placed at various locations. He has many stories to tell, here is one...

I worked several times at Dingwall, which was the junction with the Skye line and the terminus of the Strathpeffer branch line.

One September day in either 1927 or 1928 I received a telegram from Train Control, instructing us to detach from the rear of the train from Wick, the travelling Post Office, and attach it to the Skye Boat train which arrived ten minutes after the mail had left for Inverness, 22 miles away. A local train from Tain followed the first two, but it was unaffected. I walked to the locomotive shed to make sure that the shunting engine driver was fully informed and then returned to the office to instruct the signal cabins and the passenger shunter, but I met on the platform a girl I had met when working at Kildary some weeks earlier. We had a lot to say, and I was startled to see the sixteen coach train arrive. It was now too late for me to do anything, and returning to the office I stuck the form on the metal spike, and said nothing. It was possible that the change would not cause much trouble at Inverness, for it would arrive as normal.

When the three trains had gone I went for lunch, and put the matter out of my mind before I returned. On entering the office I knew by the faces of those present that all was not well, and Willie Sim indicated with his thumbs the door of the stationmaster's office which was closed. I knocked and entered, to find the occupant seated at his desk, wearing his uniform gold braided cap, an ominous sign. He handed me a telegram form, and I quickly read the message. It demanded by return the name of the person responsible for the delay of 40 minutes to the London train, and the reason for the failure to carry out the instructions sent. I could think of nothing to say and stood irresolutely with the paper in my hand. "Black Sandy" stabbed with his forefinger towards the door, and as I turned he shouted "You are not on my staff you're on your own", and then added, "Shut the door".

I was soon enlightened: the Duke of Athlone, the only surviving son of Queen Victoria was returning to London after having spent the grouse season at Farr House, and the royal coach had been sent north for his use. It was to have been attached at the rear of the long train, so that the noise of the engine would not disturb him, and the Post Office coach attached at the rear, as it would have a stabilising influence and also act as a buffer if the train was rammed in the rear by another, a most unlikely occurrence for most collisions were "head on".

The Duke, who was now very old, was furious at the delay, and heads would have to roll. As soon as Black Sandy had gone home, the duty staff assembled in the office to discuss my plight. Almost everyone was sure that this was the end of my career, and the first suggestion was that I should resign, as this was better than getting the sack. Traffic had continued to fall after the General Strike, and a number of men in my age group had resigned to take posts in the Benguella Railway, now expanding in Angola, knowing that there would be little promotion for them in the future. All had been on strike in 1926.

I rejected this and asked for suggestions, but these were more jocular than useful; fainting fit, temporary loss of memory, attacked by an enraged passenger, still under the influence of alcohol consumed on the previous evening. "Dynamite Dan" Macgillivray, the branch train guard, offered to give evidence that he had once gone to "Bochans" at Muir of Ord, whose whisky was so potent, being made by a local and illegal whisky still, that it had been several days before the influence wore off. It seemed so far the only possible excuse, but I decided to ignore it. "Townie" the foreman porter returned to the "fainting fit" proposal, and I remembered the two Indian peddlers I had casually noticed in the station. Dan said that they had been on the branch train. and this was all the information I required for the explanation I was to give. A few minutes discussion and my reply was ready to be transmitted to the Traffic Manager. It said that I had started to make the necessary arrangements for the change over, but on my way to the signal cabin I had been intercepted by two Indian peddlers, with very poor English and so gave them the information they needed in Hindustani. They became very importunate, both holding me firmly and questioning me on many matters, with the result that the train concerned had arrived. 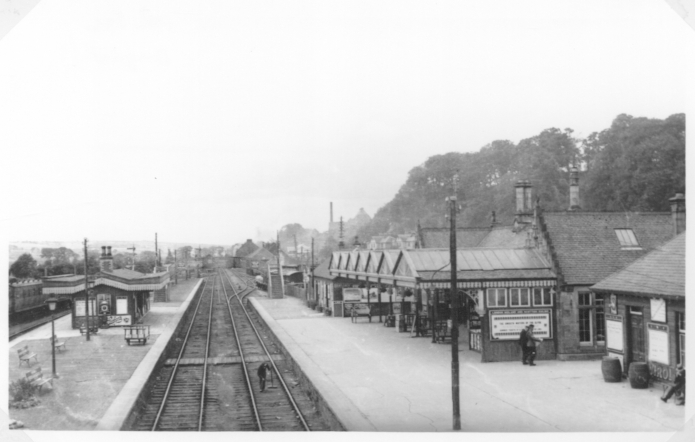 The telegrapher at the other end of the line acknowledged receipt with the letters "MIM" and "IMI", instead of the procedural "RD". The first group was our informal code for "amazement" and the second for "incredulous laughter". Townie, a Pontefract man, had been a sergeant major in the "Ross-shire Buffs" and had spent much of his service in India; he had a stock of the words used by the soldiers there, most of them terms of abuse for the native servants which even private soldiers had to serve them. I memorised as many as possible in the next two days, while Townie attended to the details outside the station.

On the third day Mr Dempster, an inspector, arrived and went into Black Sandy's office, without giving any sign of recognition. After a considerable period of time I was summoned to his presence. Mr Mathieson stood respectfully beside the desk, while "Spring Balance" (Mr Dempster) sat in the chair with a file of papers of alarming thickness before him. Without any preamble he asked. "What's this cock and bull story about you speaking this Asian language?"

Summoning all my aplomb I looked at him, and tried to inject a note of indignation into my voice. I replied. "I beg pardon, sir! I have some knowledge of Hindustani". He seemed nonplussed and fingered the papers before him before turning to the stationmaster to ask. "Have you any knowledge of it, Mr Mathieson?" It was some seconds before he could reply, so taken aback was he by the query. "No! no! no!... Mr Dempster, just the Gaelic ... nothing more ... nothing more". Dempster stared at me, while I shuffled uneasily, then he abruptly told me to leave, which I did hurriedly.

I stood outside the closed door, straining to catch what was being said inside, without success, until I was called in again. Did I know anyone in Dingwall fluent in the language. I regretted that I did not, but so many of the men in the area had served abroad that there was certain to be a good number. I suggested "Townie", but Mr Dempster said sharply that he did not want any railwaymen, and then, changing his mind, said that he would like to see the foreman porter. I was again dismissed. and Townie was sent for.

He had given the names of several people, who, he knew had a knowledge of Indian languages but all were rejected. He then added that he had heard that the manager of the Conservative Club had been employed for many years in India, and would perhaps be able to assist. The title of the club obviously impressed Mr Dempster, who told me to accompany him to this establishment. The club was two rooms above a greengrocer's shop, and the manager was Duncan Durward. a friend of Townie's. The area from Dingwall to Invergordon formed the "State Control Area" where all the licensed premises were owned by the Government, a relic of the First World War, when the area was flooded with soldiers, sailors and dockyard workers.

Drunkenness was so rife that the State had to take over all places where it was sold. The State's policy was to reduce drinking, and the only place where a bottle of spirits could be purchased in Dingwall was in the "Liquor Store" a former shop on the High Street with large clear glass windows. Most members of the club were the farmers, and only in this way could they obtain a drink between 3 o'clock and opening time in the evening. No food was made available, and Duncan's job was to see that a stock of drink was always on hand, and to keep the rooms tidy. He had served in the army and had tried many jobs, and claimed that he had been with a troupe of actors for a number of years, and had often played the leading part. He was a plausible rogue and was willing to do almost anything for a reward. Townie and he had assiduously rehearsed the part he was now to play.

He met us at the top of the stairs and I introduced myself and Mr Dempster, who outlined what he wanted. Duncan nodded understandingly. "I am most willing to help in any way. I spent many years in India, and in addition to Hindustani I had to pick up many of the varied tongues spoken in that vast and fascinating country. Hindustani I know best, that being the lingua franca of the rajahs and princes, and most of my dealings were with these. All speak excellent English but naturally like us to speak their language."

Dempster listened with little interest. "Right then", he said, "let us have a trial".

Duncan turned to me, "Could you say a few sentences?" he asked. Holding my hands behind my back, and gripping them firmly, I drew a deep breath and repeated some of the words and phrases I had learned, starting with the numbers from one to ten. "Eki, do, chin, panj, sat, ath, naw, das" and continued with words like "panee lao, juldee, budmash". I tried to make them sound like sentences.

Duncan responded with a stream of words, and I said "Hang, hang" at intervals, the word I believed meant, yes. Duncan turned to Dempster, "That's quite good", he said. "Naturally his accent is bad, but he can be understood, which is required in everyday life". I interjected that I did not understand all that he had said, in case Dempster asked me what it did mean. But he stood for a minute, undecided as to what he would now do. Then he turned on his heel, and left, saying over his shoulder, "Get back to work". I ventured to stay a few seconds to promise Durward that I would be in the National bar that night.

I got a letter of warning from the Traffic Manager, reminding me that my first duty was to work in the interest of the company, and that the public should be directed to the station office if I was engaged on other duties. My success in evading any penalty gave me a reputation as an expert in this field, and I was often asked to write letters of explanation for falls from grace. Many of my actions were motivated by vanity, not the only deadly sin I committed.