John Yellowlees has a look at a tourist line in Quebec

Some viewers of Michael Portillo's Great Canadian Rail Journeys might have been surprised to hear him describe as the country's most beautiful journey a line of which they had never heard. Your Editor certainly was, so he despatched his special correspondent to lead a no expenses (the word "spared" has been deliberately omitted) investigation. Here is the resultant report.

The journey to which Michael referred is along the north shore of the St Lawrence Estuary from Quebec City downstream on the Charlevoix Railway. Viewers saw him travel in a modern diesel multiple-unit with excellent all-round visibility from Quebec City's Chute Montmorency station, alighting at the fabulous basilica of Saint Anne de Beaupré, likened by him to Lourdes, where we caught sight of crutches discarded by those for whom a miracle had returned the power of their legs. Hugging the shore, the train continued on its 125-km journey to La Malbaie, and he broke his journey on the way back at Baie St Paul and the Montmorency Falls.

We learned from Michael that La Malbaie developed a century ago as a fashionable resort that attracted the likes of U.S. President Taft. Inland lies a wilderness of mountain peaks in the Laurentian Shield, and his adventures included landing by seaplane on a remote lake. Near Baie St Paul, another settlement redolent of wealth and good taste, Michael visited a couple who turn tomatoes into wine, and at the Montmorency Falls where the French defeated General Wolfe in 1759 he ascended in a lift to ride across the foaming waters on a zipwire.

The Quebec, Montmorency and Charlevoix Railway Company (QM&C) was incorporated by an act of the Legislature of Quebec in 1881. The railway was to be built along the Saint Lawrence River and was intended to provide service to as far east as Baie-Sainte-Catherine, which was in turn expected to be developed into a major seaport with ice-free shipping even in winter.

The first part of the line between Limoilou and Sainte-Anne-de-Beaupré, Quebec went into service on Saturday 10 August 1889. It was built at the time for the pilgrimage to the Basilica of Sainte-Anne-de-Beaupré, and the railway was nicknamed the "Railway of Good Saint Anne". Initial operations were with steam locomotive hauled trains. The line was electrified in 1904, when the company changed its name to Quebec Railway Light & Power (QRL&P). Between 1904 and 1959 electric trains provided an interurban type service for passengers between Quebec and Sainte-Anne-de-Beaupré. 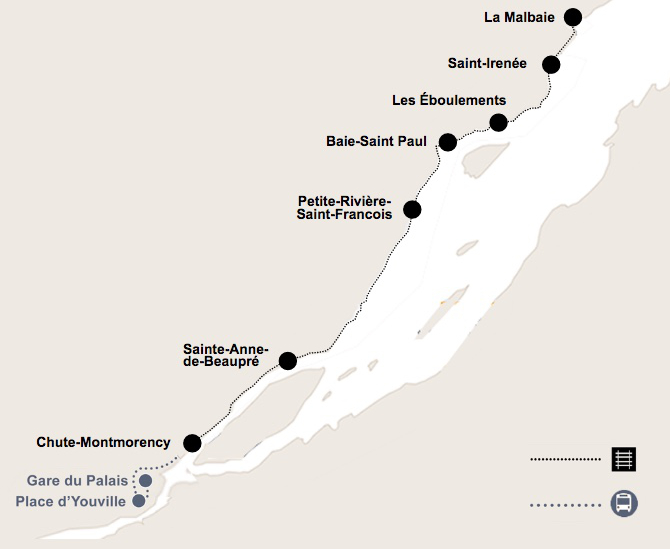 The second part of the line, extending from Beaupré to Clermont in Charlevoix, was built between 1909 and 1919. The Richelieu & Ontario Navigation Company had built the large Manoir Richelieu at Pointe-au-Pic (now part of La Malbaie) in the 1890s. At first hotel guests would get to the hotel via Canada Steamship Lines steamships. Rodolphe Forget ran for the House of Commons in 1904 promising voters an extension of the QM&C line, which was eventually done. This part of the line is very scenic because it is literally wedged between mountains and river. It required huge investments in time and money: there are two tunnels and 900 bridges and culverts, or an average of one every 165 metres.

With the line extended, Manoir Richelieu hotel customers could use the QRL&P trains instead of Canada Steamship Lines (CSL) vessels to get to the hotel. The hotel building burned down in the fall of 1928 but was rebuilt to designs by John Smith Archibald and reopened in June 1929. CSL vessels continued to call at the hotel until 1966.

In 1951 Canadian National (CN) took over as owner of the railway. The line became known as the Murray Bay Subdivision of CN, Murray Bay being an English name for La Malbaie. In 1959 CN terminated passenger service and dismantled the overhead lines used for electrification between Limoilou and Saint-Joachim.

In 1984 the line saw the reintroduction of passenger service when a diner train known as the Le Tortillard du Saint-Laurent started operating between Quebec and La Malbaie, but this lasted for only two seasons. In 1994 CN sold the whole line to the Quebec Railway Corporation. The Tortillard du Saint-Laurent dinner train was restarted under another company and ran again in 1995 and 1996 before declaring bankruptcy. In 1996 the Charlevoix Railway Company created a major timber transshipment yard at Clermont, which is used by almost all timber processors of the Côte-Nord.

On 7 May 2007 Nancy Belley, who had spent more than 10 years managing the Chemin de fer Charlevoix subsidiary of the Quebec Rail Corporation, was hired by Le Massif to serve as the manager of their railway project. Work on restarting passenger trains began in September 2008 with renovation of Charlevoix Railway track partially funded by grants from the national and provincial governments, and with a total cost of C$18.4 million. In April 2009 Le Massif de Charlevoix organisation purchased the line between Quebec and La Malbaie from the Quebec Railway Corporation.

Infrastructure Canada announced in November 2009 that the governments of Canada and Quebec would contribute C$5 million toward the railway line upgrade. Train de Charlevoix has two two-car trains which are unique in Quebec. They were manufactured in 1981 by Deutsche Bahn in Germany.

From September 2011 the new tourist train service began operation along the Charlevoix Railway between Quebec City and La Malbaie. CN still has running rights to use the line to haul freight between Clermont and Quebec. The Port of Quebec City lists the Chemin de fer Charlevoix as a rail transport provider to the port's facilities.

Note that the passenger train no longer runs in the winter, so there is no service to the ski area. In fact the timetable operates only from June to October - so again folk who believe that countries like Canada and New Zealand combine the best of local rail service with tourist delights should be careful what they wish for!