In a new venture, announced on World Book Day on 7 March, Network Rail has teamed up with Thomas the Tank EngineTM to help pre- and primary-school children to understand the dangers that exist on railways. 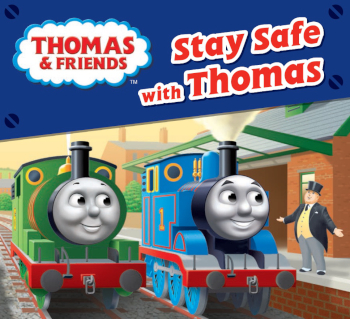 Mattel, the licensee, and NR have produced a story book to help parents and teachers to explain about rail safety. This is available in print and e-book versions. NR and British Transport Police are distributing copies to libraries, nurseries and doctors' surgeries.

The launch of the book follows the You vs Train campaign, run by the rail industry and BTP last summer, which targeted older children and teenagers to warn them of the dangers of the railway. In the last five years, the number of young people taking risks on the railway has gone up by almost 80 per cent.

Allan Spence, head of public and passenger safety at Network Rail, said: "The railway is full of both obvious and hidden dangers. By offering parents an engaging and fun way to talk to their children at a young age about safety on the railway, we hope children will grow up knowing the dangers and keep themselves and their friends safe."

BTP Superintendent Susan Peters said: "Our focus is keeping people safe and working with such a well-known children's television character is exciting. This Thomas the Tank EngineTM story book gives us an engaging and accessible way to ensure essential safety messaging is reaching young children. Although BTP runs activity through the year to educate the public of the seen and unseen dangers in and around the railway tracks, we hope that being able discuss this subject through the use of these books will make our safety messages go further."