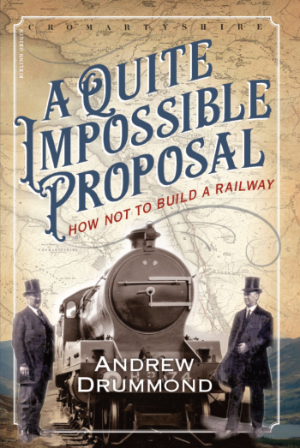 This is a book with a very wide appeal. Railway aficionados will find it fascinating, those interested in politics and social and economic history equally so.

The book begins with a lengthy section giving a vital background to life in the remoter parts of the UK such as Ireland and Scotland at the time of the story.

Providing the context of the need for "Better Communications" to north-west Scottish ports is essential to understanding how the desire to build railways came to the fore.

There are some surprising and colourful moments in this introductory narrative. The reader's understanding of present day politics in Scotland will be greatly improved by appreciating some of the underlying attitudes that prevailed when a far away government was challenged - and can still be seen today!

Andy Drummond tells the story in an easy and friendly style, with plenty of humour - sometimes causing this reader to laugh out loud.

More stunning similarities with the present appear once you get into the railway planning details - huge road-building projects were government-funded with "the purse of the British government yawning open for them", whereas for railways the funding had to be done with private capital "which introduced an element of danger and excitement; or, for the avoidance thereof, the heavy hand of caution."

The author concludes with some thoughts about the same area in the 21st century. Many of his comments about transport priorities could have been penned by FoFNL.