The train for the Far North Line leaves Inverness Station. The passengers are off for an adventure on a journey of varied scenery from the pastoral lands around the Firths to wild Sutherland and the quiet silence of the Flow Country before arriving at Thurso and Wick. But the train is slowing down - what is happening? - is there something wrong? Then it slowly crosses the swing bridge over The Caledonian Canal. There is plenty of time to look out of the window. There might be a ship in the locks to the left or to the right another waiting in the Beauly Firth to enter the sea lock. Then onwards to the right are the houses of the quaint village of Clachnaharry. After passing under the road bridge the train accelerates and the wide vistas of the Beauly Firth open up.

Railway swing bridges are not unique. There is another that works in a similar fashion to the Inverness one at Banavie, near the southern end of the canal on the Fort William to Mallaig line. The earliest railway examples are in East Anglia at Reedham over the River Yare and at Somerleyton over the River Waveney. When the railway constructed the line from Norwich to Lowestoft in the 1840s, there was a need for wherries, tall sailing ships used in the Broads and other places in England, to continue despite the railway with their business of conveying goods and passengers. The present bridges date from 1905 when they were rebuilt as the line was doubled, and new signal boxes constructed to control the bridges. Unlike the Caledonian Canal examples, the whole operation of opening and closing is controlled from the box, so the signalman does not need to go outside. 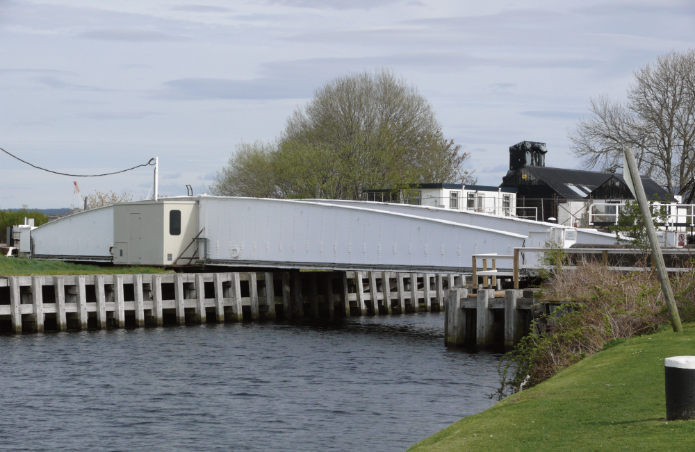 The swing bridge over the Caledonian Canal is between the sea lock at the entrance from the Beauly Firth and the two locks leading up to the Muirtown Basin. The canal at this point is 120ft wide and 18ft deep. The replacement bridge of 1909 is like the original. Built on a skew of sixty-five degrees, two hog backed wrought iron plate girders, 126ft long, pivot on a platform built out from the east bank. The span over the canal is 78ft with a shorter balancing arm of 48ft.

There used to be a station at Clachnaharry, the pretty former fishing village on the west side of the canal which closed in 1913. In the past, railway workers lived in the village including signalmen, one of whose duties was to open and close the swing bridge. Even in the modern days of radio signalling, opening and closing the bridge is still a manual job carried out by staff from the adjacent signal box, the only working one left north of Inverness. When the bridge needs opening for shipping to pass, the signalman first obtains permission from the Inverness Signalling Centre which controls the whole line. He then manually unlocks the bridge with large old-fashioned keys on locks on the levers and he can then release a positioning bar. He leaves the signal box with the keys that he uses to release the bridge before crossing it to enter a small shed attached to the seaward side of the bridge. From there he operates a control panel to swing the bridge. The decking is hydraulically lifted clear of the approach rails and then lowered in order to swing to one side. The operation takes around twenty minutes. In the past, instead of the control panel, they opened the bridge by turning a handle that was situated out of doors on the east side of the bridge. This older method was quicker than the present arrangement but must have been very unpleasant for the signalman in bad weather.

This eccentric contraption provides an interesting spectator experience for pedestrians on the towpath and vessels using the canal. Two signalmen share the work week about. The canal, especially in the summer months is busy with craft avoiding the stormy passage through the Pentland Firth, so the requirement for a swing bridge is not likely to disappear any time soon.